Notes From Earth: Echoes From the Distant Past 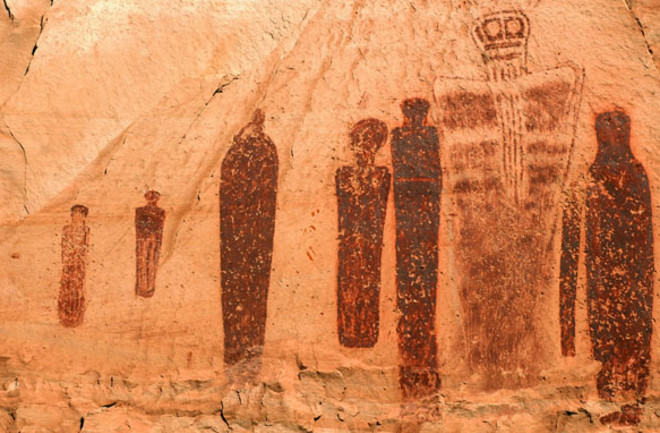 The 4,000 year-old pictographs at Horseshoe Canyon in Utah may have been inspired by the spectacular acoustics there. <a href="http://www.shutterstock.com/pic-7073197/stock-photo-holy-ghost-pictograph-panel-in-horseshoe-canyon-canyonlands-national-park.html">Shutterstock</a> | NULL

When priests at the temple complex of Chavín de Huántar in central Peru sounded their conch-shell trumpets 2,500 years ago, tones magnified and echoed by stone surfaces seemed to come from everywhere, yet nowhere. The effect must have seemed otherworldly, but there was nothing mysterious about its production. According to archaeologists at Stanford University, the temple’s builders created galleries, ducts, and ventilation shafts to channel sound. In short, the temple’s designers may have been not only expert architects but also skilled acoustical engineers.

The findings add to a growing body of research suggesting that sound meant more to our ancestors than archaeologists once realized. We live in a sound-saturated society, full of iPods, thunderous special effects in movies, and thousand-watt car stereos. New discoveries in the young field of acoustic archaeology hint that just as we create elaborate sonic environments with our electronics, the ancients may have sculpted their soundscapes as well. Like many artistic endeavors, their efforts may have been rooted in an attempt to reach the divine.

Portals to the Spirit Worlds

Some of the first research on the importance of acoustics to prehistoric peoples was done by Iegor Reznikoff, an anthropologist of sound at Université Paris Ouest, who in the 1980s visited cave paintings and carvings in southern France that are about 25,000 years old, among the oldest known human art. A number of them are so far underground that scientists were puzzled as to why anyone would have gone there. Reznikoff, who has a habit of humming whenever he enters a space, noticed that in parts of the caves, his voice resonated as effectively as in any cathedral. He and a colleague mapped several caves and found that areas with the greatest resonance coincided with the concentration of artworks.

Further evidence for the connection between art and sound came from Steven J. Waller, a biochemist and avocational archaeologist from California. Waller knew that echoes played a role in many ancient myths, such as Native American tales of sprites who speak through portals in rock walls. In 1994 he conducted an acoustical survey of Horseshoe Canyon, a three-mile-long chasm in southeastern Utah decorated with eerie pictographs. Waller hiked the canyon, pausing at 80 locations to snap a noisemaker fashioned from a rat trap and record the echoes. After processing the results with sound analysis software, he found that five spots displayed powerful echo effects. Four corresponded to the locations of paintings that Waller had encountered. When he asked experts about the fifth, they explained that it, too, bore artwork, though the pictographs were not visible from the path he had followed. Since then, Waller has repeated the experiment at hundreds of rock art sites around the world, almost always finding a correlation between image and echo. He speculates that ancient artists “purposely chose these places because of sound.”

Such findings suggest that ancient people created artworks in response to acoustics; others hint that they may even have built structures to control it. For example, El Castillo pyramid in Mexico, built by the Mayans some 1,100 years ago, bears four stepped sides, each vertically bisected by a staircase. If you clap your hands at the pyramid’s base, you hear a series of chirps. Locals near similar pyramids have long compared the sound to the cry of the quetzal, a bird venerated by the Mayans. In the 1990s acoustician David Lubman recorded the hand-clap echoes at El Castillo and compared them with recordings of the quetzal. He found that recordings and sonograms of several echoes really do match the bird’s cry. Lubman says the echo “is a powerfully robust phenomenon” unlikely to have resulted by accident.

The most detailed evidence of ancient acoustical design comes from the Stanford team studying Chavín de Huántar, which was constructed between 1300 and 500 b.c. Peruvian archaeologists first suspected the complex had an auditory function in the 1970s, when they found that water rushing through one of its canals mimicked the sound of roaring applause. Then, in 2001, Stanford anthropologist John Rick discovered conch-shell trumpets, called pututus, in one of the galleries. The team set out to determine what role the horns played in ancient rituals and how the temple may have heightened their effects. Archaeoacoustics researcher Miriam Kolar and her collaborators played computer-generated sounds to identify which frequencies the temple most readily transmits. Over years of experiments, they found that certain ducts enhanced the frequencies of the pututus while filtering out others, and that corridors amplified the trumpets’ sound. “It suggests the architectural forms had a special relationship to how sound is transmitted,” Kolar says. The researchers also had volunteers stand in one part of the temple while pututu recordings played in another. In some configurations, the sound seemed to come from all directions.

Kolar believes the combination of instrument and architecture may have been used to create a mystical experience. She asserts that the totality of evidence—including carvings showing celebrants with eyes upturned and bodies shape-shifting into half-animal forms—indicates a spiritual intent.

Since the Chavín civilization left no written records, proving that the temple was deliberately designed to produce ethereal sound effects will be a challenge, notes archaeologist Richard Burger of Yale University. In the 1970s Burger collected evidence that the galleries were built for drainage and ventilation. He is skeptical that shafts were intentionally constructed to transmit specific sounds but does not doubt that Chavín engineers kept acoustics in mind when planning the temple’s layout.

Until recently, “archaeology has been strictly visual,” says Chris Scarre, an archaeologist at Durham University in England. But the studies at Chavín de Huántar and elsewhere show the value of broadening the field’s approach. After all, Scarre says, “to produce a two-dimensional vision of the past is to diminish it.”

Douglas Starr codirects the Program in Science and Medical Journalism at Boston University. His most recent book is The Killer of Little Shepherds.