NOC, the white whale that tried to sound like a human 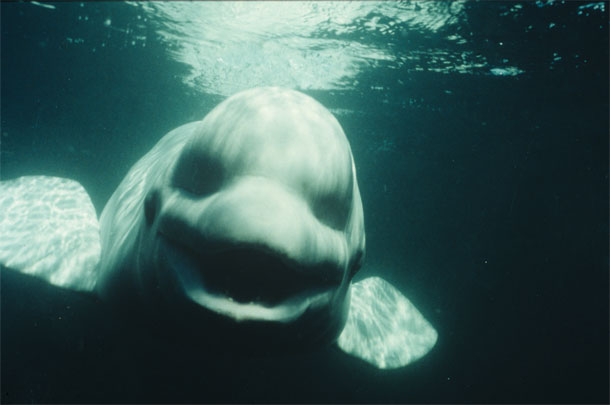 // Listen to this recording. It sounds like a drunkard playing a kazoo, but it’s actually the call of a beluga (a white whale) called NOC. Belugas don’t normally sound like that; instead, NOC’s handlers think that his bizarre sounds were an attempt at mimicking the sounds of human speech. The idea isn’t far-fetched. Belugas are so vocal that they’re often called “sea canaries”. William Schevill and Barbara Lawrence – the first scientists to study beluga sounds in the wild – wrote that the calls would occasionally “suggest a crowd of childrenshouting in the distance”. Ever since, there have been many anecdotes that these animals could mimic human voices, including claims that Lagosi, a male beluga at Vancouver Aquarium, could speak his own name. But until now, no one had done the key experiment. No one had recorded a beluga doing its alleged human impression, and analysed the call’s acoustic features. NOC provided the right opportunity. He was one of three belugas that arrived at the National Marine Mammal Foundation (NMMF) in San Diego in August 1977, after originally being captured by Inuit hunters in Canada. Being the smallest of the trio, NOC was cheekily named after “noseum”, the tiny gnats that plague the hunters during the Canadian summer. In May 1984, seven years after NOC’s arrival at San Diego, the staff at the NMMF started hearing noises that resembled speech-like sounds. At first, no one could work out where the noises were coming from. They sounded “as if two people were conversing in the distance just out of range for our understanding,” writes Sam Ridgway. The mystery was solved later that year, through a lucky accident. A group of divers were training outside NOC’s enclosure, when one of them surfaced and asked “Who told me to get out?” It was NOC. After that incident, the trainers watched him more closely and confirmed that he was the source of their mysterious noises. He did so spontaneously, without any training. And he made the calls when alone or when his human handlers were around, and never when socialising with the other two whales in his tank. Ridgway’s team recorded NOC’s calls, and found that their acoustic features were very unlike typical whale sounds, but not unlike those of human speech. The rhythm was comparable, with vocal bursts that lasted for around three seconds and gaps of less than 0.5 seconds. NOC’s calls had a fundamental frequency of 200 to 300 Hz (the octave around middle C), which is similar to the range of human speech, and much lower than a whale’s usual sounds. After many rounds of recording, Ridgway’s team started training NOC to make the speech-like sounds on cue, so they could better study how he did it. Whales produce sounds by sending air from their nasal tract past their phonic lips – a pair of vibrating muscular folds that act like our voice box. From there, the air enters two pouches called the vestibular sacs. NOC mimicked human noises by increasing the pressure in his nasal tract, finely controlling the vibrations of his phonic lips, and greatly over-inflating his vestibular sacs, to hit those lower registers. Stan Kuczaj, who studies sea mammal behaviour at the University of Southern Mississippi, is convinced. “The beluga did seem to be mimicking human speech, and did so quite successfully,” he says. “Belugas are known to have excellent acoustic mimicry skills.” Justin Gregg from the Dolphin Communication Project, says, “Listening to the recording, it does not sound exactly like human speech—I have no idea what the whale is “saying”—but [Ridgway’s team] have certainly made the case that the whale was trying very hard to produce human language sounds.” “We do not claim that our whale was a good mimic compared to such well-known mimics as parrots or mynah birds,” writes Ridgway. But he maintains that the calls he recorded are a good example of vocal learning – where animals learn to make noises based on hearing others around them. In this case, it’s likely that NOC picked up the pitch and rhythm of human speech after spending years in close contact with his handlers. Why? Kuczak says, “I don't think the whale was trying to learn human speech in order to communicate with humans.” Instead, he suggests that NOC was simply interested in these odd sounds in his environment, and tried to reproduce them. Gregg adds that belugas, like dolphins, are very social animals, and the ability to learn and mimic new calls might help them to address other individuals. They also have very sophisticated echolocation, and can subtly alter their ultrasonic clicks to scan their environment. “They already have an amazing ability to alter parameters of their vocal tract, which should make it all the more easy to replicate human speech sounds,” says Gregg. NOC’s attempts at human-like sounds continued for four years. As he grew up, he stopped, but he carried on being talkative, with a regular portfolio of “squawks, rasps, yelps or barks”. Twelve years ago, NOC stopped calling altogether. He finally passed away after almost 25 years at the NMMF. Through Ridgway’s recordings, his voice echoes on. Reference: Ridgway, Carder, Jeffries & Todd. Spontaneous human speech mimicry by a cetacean. Current Biology 22, R860-861. PS: Ridgway presented his findings at a conference in the 1980s, but other research projects took precedence.“In the rush to report funded work, this interesting side-note got lost in the shuffle until recently when colleagues encouraged us to publish the data,” he says. PPS: Credit to Justin Gregg for the kazoo line. More on whales and dolphins: