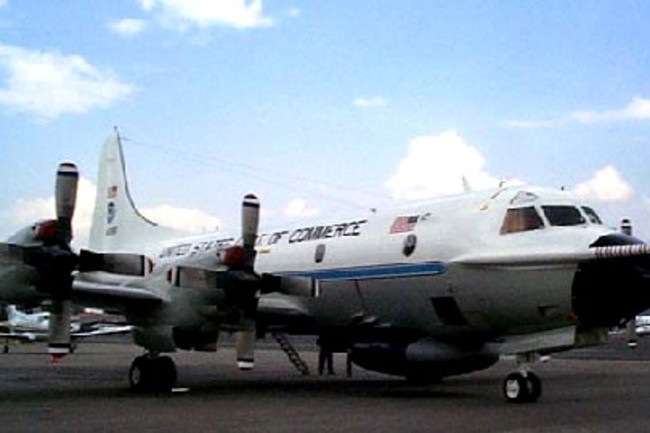 [A NOAA P-3 on the ground in Washington, D.C.] This is a subject I've been meaning to do some reporting on for some time, but with the move and all my other obligations, I just haven't gotten the chance. So I've decided simply to blog about it (even though blogging is just a "hobby," and not a real job--right?). You may or may not be aware that the National Oceanic and Atmospheric Administration flies regular missions into hurricanes using instrumented aircraft. Two of the planes they use are Orion WP-3Ds, or P-3s for short, and they're nicknamed "Kermit" and "Miss Piggy." Well, it has recently come to my attention that we very nearly lost Kermit--to say nothing of his talented crew--back in February. As an internal (and to my knowledge not yet public) NOAA report (PDF) relates, the plane had been detailed to fly a research mission into a non-tropical low pressure system in the North Atlantic off of Newfoundland as part of the Ocean Winds Experiment. On February 9, something seemingly unprecedented and nearly deadly occurred.

[Kermit in flight, with all four engines firing.] Flying at night and in unusually dry and very windy conditions, the plane suffered the failure of no less than three out of four engines. The apparent cause? Accumulation of sea salt aerosols--an obvious by-product of seawater evaporation, but never thought to be a risk at the flight's altitude level--on the engines. Reading between the lines, it sounds like this particular combination of dryness, high winds, and night flying was a novel one even for a very experienced flight crew. And it was very nearly deadly: With only one engine running, the plane was going down, and only luck and quick thinking seems to have saved the day. Notably, Kermit flew through some precipitation just before disaster might have occurred, and this may have helped wash some of the salt off the engines--which subsequently restarted at the last minute. It sounds like the crew performed admirably in this case, and that they simply encountered new and unknown meteorological conditions--a danger no one knew was lurking out there in the atmosphere. In any event, it's a stunning and frightening story. Indeed, when comparing it to another near-crash tale involving a P-3--see Jeff Masters' account of "Flying into Hurricane Hugo" in 1989--I note that in that case the plane only lost one engine and sustained damage to a second. In contrast, and to repeat, this latest 2007 case saw the failure of three out of four engines! So thank goodness the plane and the crew were all right. As for more general conclusions that may be drawn--does this incident say anything about safety measures or funding levels for instrumented aircraft research, or was it simply a freak event--I leave that to those more expert in the subject matter. I don't have enough background knowledge about this highly specialized form of aviation to jump to any conclusions.

P.S.: Unbeknownst to me, there was a previous public mention of this incident, see here.