No, wait, THIS is the world’s smallest frog 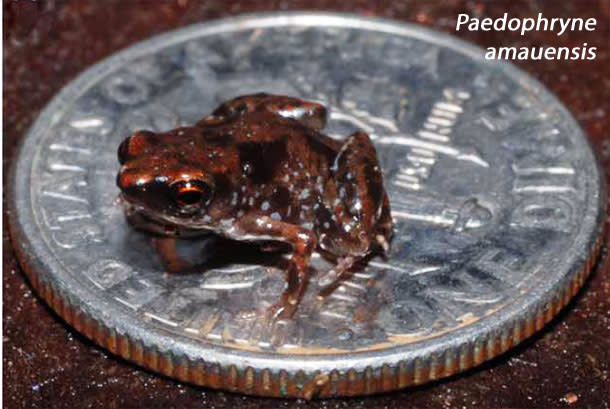 In December of 2011, Fred Kraus from the Bishop Museum in Hawaii announced that he had discovered the world’s smallest frogs. The two coin-sized species were just 8.1 to 9.3 millimetres long. But these miniscule amphibians now share a different record – they were the world’s smallest frogs for the shortest amount of time. Less than a month after Kraus’s announcement, Eric Rittmeyer and Christopher Austin from Louisiana University have found an even smaller frog, just 7 to 8 millimetres long. It’s dwarfed by a dime. It’s not just the world’s smallest frog, but the world’s smallest back-boned animal. The new species, Paedophryne amauensis, is a close relative of the tiny pair from December – Paedophryne dekot and Paedophryne verrucosa). Extremely tiny frogs have evolved at least 11 times, but the Paedophryne group is unique in that all of its membersare miniscule. They were first discovered in 2002, and six species have been discovered so far. All of them live in Papua New Guinea. Clearly, this corner of the world is a haven for the tinier side of life. The Paedophryne frogs are, for obvious reasons, almost impossible to spot. But they can be easily heard. Their high-pitched calls make them sound like crickets, and perhaps explorers have long mistaken them for insects. “It doesn’t sound like a frog at all,” says Austin, who had no idea what was making the call when he first heard it. “After several failed attempts to find it, we ended up just scooping up a big handful of leaf litter where the call was coming from and putting it all in a clear plastic bag. We went through that bag leaf by leaf until we discovered the incredibly small frog making the call.” 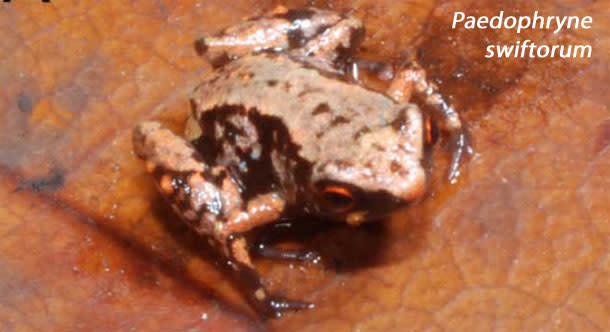 The frogs all have a number of space-saving features to help them cope with such small bodies. Their feet and skulls have simplified and now contain fewer bones. Some of their toes have shrunk to useless nubs. They have lost some of their vertebrae. They never go through a tadpole stage either. They begin life looking like adults, albeit even smaller. Many other normal-sized frogs have done away with their tadpole forms, probably because tadpoles are very vulnerable to underwater predators from fish to insects. Austin thinks that extremely small tadpoles would be so susceptible to such predators that they couldn’t survive. This means that the tiniest of frogs could only have evolved from lineages that have no tadpole stage. The Paedophryne frogs also have a much higher surface area for their size than their bigger relatives, so they’re very vulnerable to drying out. For amphibians, which are usually so reliant on their ties to water, that would be fatal. This might explain why all the Paedophryne frogs live in the damp leaf litter of tropical rainforests, or among moist moss. They spend their lives in a perpetually moist world. It’s probably no coincidence that in drier forests, further from the equator, there are no extremely tiny frogs. The frogs probably evolved to be tiny by stunting their growth early. There’s evidence for this in their skeleton. In normal-sized frogs, some parts of the skeleton only harden into solid bone later on in adult life. In the tiny Paedophryne frogs, these pieces stay relatively soft. They live an adult life in a youngster’s body. This phenomenon is called paedomorphosis, and it’s a common trend in evolution. For example, it accounts for the tiny size of Paedocypris progenetica, the fish that held the record of world’s smallest vertebrate, until P.amauensis snatched the title by a millimetre. These frogs aren’t rare oddities. Based on these calls, Rittmeyer and Austin thinks that they are are everywhere. If you found one, there would probably be another within 50 centimetres. They are important parts of their communities. “The insect like mating call and incredibly small size of these frogs, combined with relatively limited research effort in New Guinea, is why they have gone undetected for over 200 years,” says Austin. Discoveries like these tell us how much we still don’t know about amphibians, just as the group is struggling to survive. Reference: Rittmeyer, Allison, Grundler, Thompson & Austin. 2011. Ecological Guild Evolution and the Discovery of the World’s Smallest Vertebrate. PLoS ONE http://dx.doi.org/10.1371/journal.pone.0029797More on really tiny things: