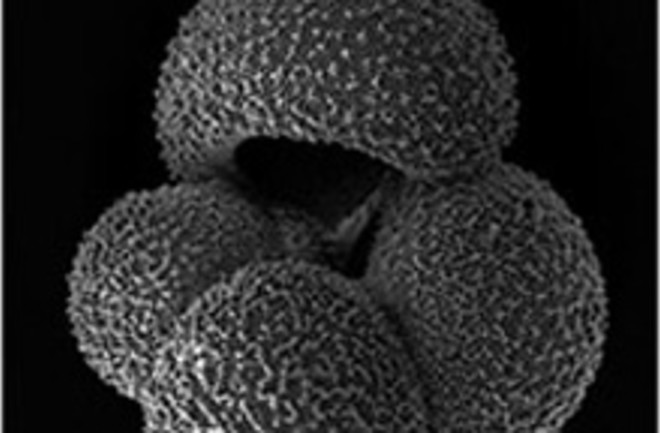 While concerns over ocean acidification are not new, a recent study provides more concrete evidence than ever before that the process has already begun. Australian scientists found that shells of the microscopic, amoeba-like organisms called foraminifera, which exist by the billions in oceans around the world, have become significantly thinner since the Industrial Revolution. The study, published in Nature Geoscience, is the first to look specifically at acidification and pin it to greenhouse-gas pollution, which is driven especially by the invisible product of burning oil, gas and coal. "It is the invasion of anthropogenic (man-made) CO2 that is causing this particular source of acidification," said co-author William Howard [AFP]. The research team compared newer shells of Globigerina bulloides, a species of foraminifera, with shells of the same species that had sunk hundreds of years earlier; the modern shells were found to be 30 to 35 percent lighter than older specimens of about the same size. The older shells predate the industrial age, when CO2 levels started rising and the acidity of the ocean, caused by the absorption of the gas, began to increase....As ocean acidity increases, the saturation levels of carbonate minerals in the water decreases, making it more difficult for organisms to precipitate out the carbonate for their shells [The New York Times]. Foraminifera are an important part of the ecological chain and also provide a bulwark against global warming. They transform carbon dioxide (CO2) from the air into calcium-based shells. When they die, their carbon-rich shells sink to the ocean floor, effectively storing the atmospheric CO2 forever.... If the loss of shell mass threatens the survival of the amoeba-like creatures, it could also disrupt a food chain reaching from the plankton they eat, all the way up to large sea mammal such as whales[AFP]. Though scientists have only recently begun to study ocean acidification, they worry about its potential to disrupt the earth's carbon cycle, and are also concerned that because it occurs on such a large scale efforts to reverse the trend are not likely to be effective in the short-term. Already, ocean acidity has increased about 32% since pre-industrial times. By 2100, it is projected to have increased by perhaps 130%, which scientists fear could have a potentially catastrophic impact on marine life [BBC].

"If forams and other shell makers are not making shells, that might change the transfer of carbon from the surface ocean into the deep ocean," said Howard. "It changes the efficiency of the biological pump, and would tend to lessen the degree to which the ocean takes up carbon [