No Filter: Ancient Whales Were Wolves of the Sea 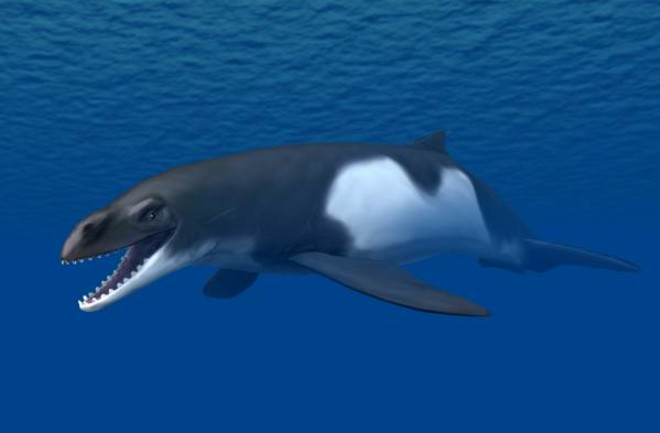 My, what sharp teeth you have, Janjucetus. New research finds ancient whales like "The Juce" here had dentition more similar to land carnivores than today's filter-feeders. (Credit: Nobu Tamura/Wikimedia Commons) The biggest animals on the planet right now are baleen whales, which upped their size thanks to efficient filter-feeding. How they got that specialized system has long been a mystery, but a new study nixes some theories about it evolving out of ancient whales' dentition. Those earlier animals, say researchers, were bitey predators with sharp teeth made for tearing things up. Let's face it, whales are kind of whacky. Millions of years after the early tetrapod transition from the sea to land, one bunch of their descendants on the mammal side said to heck with this and headed back to sea, eventually evolving into whales. And some of those whales, the Mysticeti (which always sounded to me like a gang rival to the Illuminati, but I digress), evolved a comb of keratin along the upper jaw instead of teeth. The comb filtered massive amounts of food from the water, providing such efficient nutrition that it allowed the Mysticeti, or baleen whales, to get bigger and bigger, until you end up with hundred-foot-long blue whales, the biggest animals on the planet. Yeah, okay, so most of us know about today's filter-feeders, but the question of how they evolved that trait has long bedeviled researchers. Basically, there are three hypotheses explaining how one group of toothed ancient whales adapted to full-on filtering. Notion #1 goes something like this: ancient whales ancestral to today's mysticetes always used their teeth to suck in food, much like crabeater seals today. Filter-feeding is a variation of suction feeding, after all. Evolving an actual filter through a handy random mutation made for more efficient suction feeding, which means it conferred an advantage, so it caught on quickly in the population, evolutionarily speaking. The second hypothesis is one of gradual adaptation, but still based on the ancient whales really sucking. Their food, of course. This hypothesis suggests that for a period the ancient whale had both teeth and a kind of primitive filter, all jammed into one mouth. Hey, no one said evolution is pretty. Then there's the third hypothesis, that ancient whales were actually raptorial: they were hardcore hunters that seized prey with their teeth. However, for reasons not well known — a change in available prey is one possibility — these whales became suction feeders, which caused them to lose those pointy teeth that they were no longer using for pointy purposes. Without teeth, it freed up all that space in the jaw for something else to evolve: a filter. No Butter Knives Here The best way to figure out which of these theories is most likely, say researchers behind today's study, is to figure out what the teeth of ancient whales were actually good at doing. In particular, the sharpness of a tooth can tell us where the force in a bite is concentrated, which in turn gives us an idea of how the tooth was used: slicing, dicing, chomping, mashing and so on. The researchers created high-resolution surface models of the postcanine, or cheek teeth, of nearly 20 species ranging from modern seals (including the crabeater seal) and land-based predators (including the wolf) to ancient whales from various stages of the animals' evolution. Not to put too fine a point on it, but the results were sharply drawn.

A comparison of tooth shape between wolves, crabeater seals and the ancient whale Janjucetus shows the extinct early whale's teeth rival the wolf's for sharpness. Teeth are not to scale. (Credit doi: 10.1098/rsbl.2017.0348; animal reconstructions by Carl Buell) As the comparison between wolves, crabeaters and Janjucetus shows, the ancient whales generally had sharper teeth more similar in form — and therefore function — to wolves and other land predators than to modern toothed suction feeders like the crabeater seal. Of the three current ideas about how early ancient whales evolved into modern baleen whales, the authors of today's research seem to be going with Door #3: it appears most likely that early raptorial, bitey ancient whales started suction feeding and as a result lost their teeth, which cleared the way to evolve the highly specialized filter-feeding system we see in Mysticetes today. The new study appears in Biology Letters and is open access, so go sink your teeth into it for more details.