Nile crocodile is actually two species (and the Egyptians knew it) 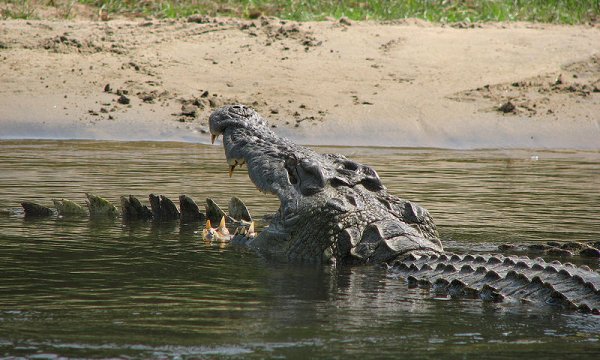 The Nile crocodile is a truly iconic animal. Or, more accurately, two iconic animals. As I've just written over at Nature News:

The iconic Nile crocodile actually comprises two different species — and they are only distantly related. The large east African Nile crocodile (Crocodylus niloticus) is in fact more closely related to four species of Caribbean crocodile than to its small west African neighbour, which has been named (Crocodylus suchus). Evon Hekkala of Fordham University in New York and her colleagues revealed evidence for the existence of the second species by sequencing the genes of 123 living Nile crocodiles and 57 museum specimens, including several 2,000-year-old crocodile mummies. The results resolve a centuries-old debate about the classification of the Nile crocodile, and have important implications for the conservation of both species.

I love this story. Genetic studies have revealed many "cryptic species" hidden in plain sight among fairly well known species. But this one stands out for several reasons. The two species in question are not each other's closest relatives. The distinction between the two species was apparently known to the ancient Egyptians and speculated about in more recent decades. Oh, and the mummies. Go read the full Nature News piece (free registration may be required). Meanwhile, I think you'll enjoy this transcript of my full chat with Ekon Hekkala, complete with tales of jumping into oases with crocodiles, persuading museum managers to part with mummy samples, and the amazing transatlantic swim of the Nile croc. How did this all start? The crocodile samples that set me off on this whole crazy search came from an oasis in Ennedi Plateau, Chad, collected by Michael Clemens. His party found six crocs in this small body of water and they just got in and swam with them at their guide’s suggestion. He thought it was curious – you’d have thought they’d be hungry!. There was a crocodile that had been killed by a falling rock so he grabbed tissue from it and brought it back to the American Museum of Natural History. I tried to sequence the sample and I kept on sequencing it over and over again because I was convinced I was 100% wrong. It wasn’t even remotely related to the Nile crocodile samples that I had been working on. This one sample was so anomalous I knew it was a different species. Are the two species different in recognisable ways? For years, people have been looking at what they considered to be the Nile crocodile and they didn’t really have much material to compare across Africa. In the 1970s, the industry that was involved in tanning crocodile hides was looking for ones with fewer bony scutes. A man called Fuchs did an analysis of the scutes to identify stocks that have fewer of them. He proposed some of these subspecies but the crocodile researchers threw out his work and said this guy doesn’t know what he’s talking about. That’s the earliest sign of a morphological difference. People had been looking and looking and they just couldn’t see these differences. There had been all this evidence throughout the years about some extreme differences but most of the anecdotes were about their behaviour. Crocodiles are generally very hard to tell apart from their exterior features. We can now revisit the morphological data to see what springs out. There’s an unpublished preliminary analysis of skulls by Chris Brochu that does pull apart the two species based on just skull morphology. We’re working together to write a description of the new species to pull together the behavioural, genetic and morphological data. What about their behaviour? There was anecdotal evidence about the weird behaviour of this crocodile. Many people, from Herodotus to current researchers, have described a sort of Nile crocodile that behaved differently. From my reading of the earlier literature about the exploration of the Nile, there were some suggestions of a smaller crocodile hanging out in the estuaries while the large, aggressive ones that everyone was afraid of lived in the middle of the Nile. Matt Shirley and I have thought about analysing the fine-scale ecological differences between the two to see if you could tap into how they could have overlapped in the Nile for so long before the recent period. Did they use different habitats or have different prey? Tara Shine found these crocs living in caves in Mauritania that initially appeared to be sluggish because they were hanging out at the hottest time of the year. But people could feed them and come up to them and they weren’t aggressive at all. And some of the local populations apparently consider these crocs sacred. She took some samples and we now know that these are C.suchus.

Does C.suchus have a common name?

Geoffrey Saint Hilaire called it the sacred crocodile in one of his papers. He didn’t specifically name it as such but he said “This sacred crocodile is called C.suchus.” We’ve talked about proposing that as a common name. Were the Egyptians aware of the differences between the two species? Herodotus wrote that the ancient Egyptians recognised one crocodile that was larger and aggressive and another that was tamer and considered sacred, which they raised in temples. That’s part of what Geoffrey St Hilaire used in his description of the species. You made a point in the paper about the fact that crocodiles are considered as living fossils... Crocodiles are constantly being put forward as this ancient species that hasn’t changed for millions of years. Our paper shows that the crocs in East Africa – the true Nile crocs – are as young as humans are. They’re very recent. C.suchus is slightly older. Its ancestor branched off from the group that includes the Nile crocodile and the Caribbean crocs around 8 million years ago.

You saw that the Nile crocodile is more closely related to Caribbean crocs than to C.suchus. What does that tell us about the spread of these animals?

We had a paper a couple of months ago which showed that the Caribbean crocs must have made a transatlantic voyage. There are currents around the southern tip of Africa that flow up and across to the Caribbean. Traders used these during the slave trade, so transoceanic dispersal isn’t unrealistic. Crocodiles can store sperm and go without eating for up to 10 months. But the interesting thing is that the ones that arrived in the Caribbean were from the east side of Africa. They would have been more likely to be picked up by the current that flows around the Cape, because C.suchus in West Africa and the Congo is more found in the interior. It’s also possible that during some period in history, C.suchus’s habitat was contracted towards the interior of the Sahara. It was trapped in the interior of the continent for some time and during that time, the Eastern species – which appears to be more estuary-tolerant – more readily dispersed around the continent and across the Atlantic. Where did the idea to study crocodile mummies come from? I had data that showed there were these eastern and western lineage, but I had this big gap in the middle where I thought the boundary between the two species was. I just wanted something to fill in that gap. I just wanted to fill in my samples! Typically, I work in natural history collections but when I worked as an anthropology undergraduate, I worked in collections that had croc mummies. So I contacted these curators and managers and asked for a tiny piece. They were very nervous but I got really teeny tiny bits from many collections. Most of them I didn’t get any DNA from, but I got some from mummies that were collected during and after Napoleon’s journey to Egypt. They were housed in a separate collection in Paris and they were hatchlings. What will this mean for conservation practices? It’s going to shake things up. The Nile crocodile is an iconic species in the conservation literature, in the history of developing conservation programmes, as a model for the sustainable use of wildlife. There’s also been a lot of trade in crocodile skins across African borders, because the species was thought to be very widespread. Suddenly, the true Nile crocodile’s range has been cut in half. And C.suchus’s was already rare in the region it exists in. We have evidence that its range has contracted recently and it’s locally much rarer than the Nile crocodile. It’s in areas that are under huge pressure from the oil industry and others. I don’t know what it would be listed as under the IUCN criteria but it’s more critically threatened than the eastern Nile crocodile. There have already been a lot of problems with the monitoring of trade in the Nile crocodile as it stood already. We’ve been trying to refine the means by which we monitor that trade. Along with this paper comes a method for genetically barcoding the samples, so it’s not just that there’s a huge new problem with no solution. We have some tools that we can provide to help with the monitoring. But it’s a huge deal. There are some countries in West Africa that thought they would be able to ramp up their trade in skins to make more money. Now, it’s unlikely that that sustainable crocodile harvest is going to be viable. Some people are going to be very unhappy. Image by Tim MuttooMore on crocodiles: