Ancient skulls show that interpersonal feuds were a frequent cause of death in the Stone Age. 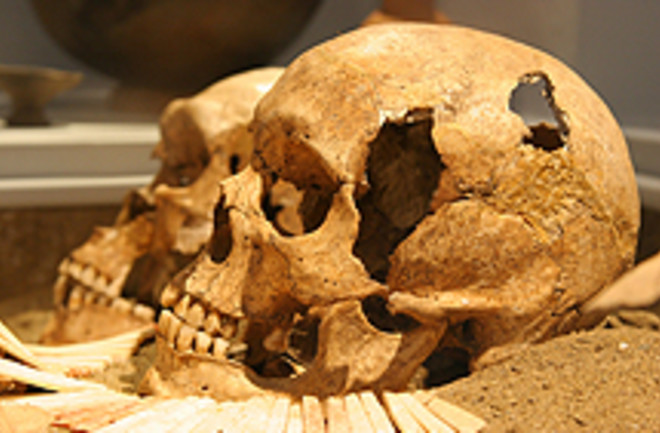 According to archaeologist Rick Schulting of Queen's University Belfast and forensics investigator Michael Wysocki, the average Stone Ager had a 1 in 50 chance of having his head bashed in.

The researchers looked for evidence of ancient altercations by examining 350 adult Neolithic skulls from British burial sites and analyzing the microstructure of any fractures they found. For example, most straight-line fractures on the crown were due to accidental falls, they reasoned, but a lot of depressed craters on the left side of the skull were most likely the work of another caveman wielding a club or primitive ax in his right hand.

Overall, Schulting and Wysocki estimate that about 2 percent of the skulls sustained death blows, while another 5 percent showed more minor, healed-over injuries. Such high numbers suggest a startling frequency of overall violence, considering that the team didn't even look at blows to other parts of the skeleton or at soft-tissue injuries like stab wounds.

"But Neolithic humans were definitely not just indiscriminately violent," Schulting says. He suspects that most injuries were the result of livestock raids gone awry and territorial feuds at a time when humans were first settling down to farming.

The more minor wounds were most likely due to an aggressively enforced social order or simple domestic squabbles. Notably, injury rates were equal for men and women, perhaps indicating an unexpectedly prominent role for women in warfare. Whatever their causes, says Schulting, "it brings home the idea that these were not just peaceful farmers living in a rural idyll."