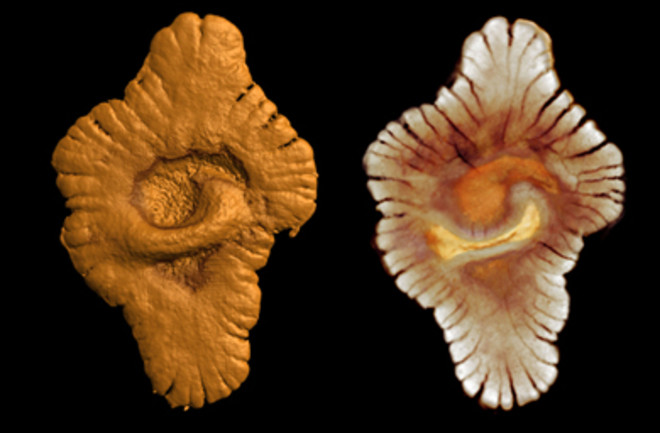 Is mulitcellular life like us just the new kid on the biological block, a latecomer to a world dominated by single-celled organisms like bacteria? Perhaps not—multicellular life could be nearly half as old as the Earth itself. A new study out today in Nature identifies fossils from Gabon in Africa that date back 2.1 billion years. The organic material is long gone, but the scientists say these are the oldest multicellular organisms ever found. That date takes them way back before the Cambrian explosion 500 million years ago that made multiple-celled life widespread on the planet.

"We have these macrofossils turning up in a world that was purely microbial," says Stefan Bengtson, a palaeozoologist at the Swedish Museum of Natural History in Stockholm and a co-author on the report. "That's a big deal because when you finally get big organisms, it changes the way the biosphere works, as they interact with microbes and each other" [Nature].

It's hard to know for sure that these specimens—which don't have a name yet and grew up to five inches across—are truly multicellular, because no organic material remains. Sometimes bacteria live in larger sheets, and those aren't true multicellular organisms. But in this case, study author Abderrazak El Albani says, the complex structure shown by the fossil remains show signs of communication between cells. And, he says, the timing of these fossils suggests why the organism was able to become more complex: There was suddenly lots of oxygen back then.

With all that oxygen just waiting to be breathed, this was probably just one of many times multicellular life took off independently, according to paleontologist Philip Donoghue.

Importantly, even if these fossils are the oldest-known multicellular organisms, that doesn't mean they were the ancestors of all multicellular life, Donoghue said. "Multicellularity hasn't evolved just once; it's evolved almost 20 times even amongst living lineages," he said. "This is probably one of a great number of extinct lineages that experimented with [increased] organismal complexity" [The Scientist].

DISCOVER: The Strange Process That Made Earth's Oxygen

DISCOVER: Six Sites That Are the Galapagos for Modern Darwins

DISCOVER: When Life Was Odd