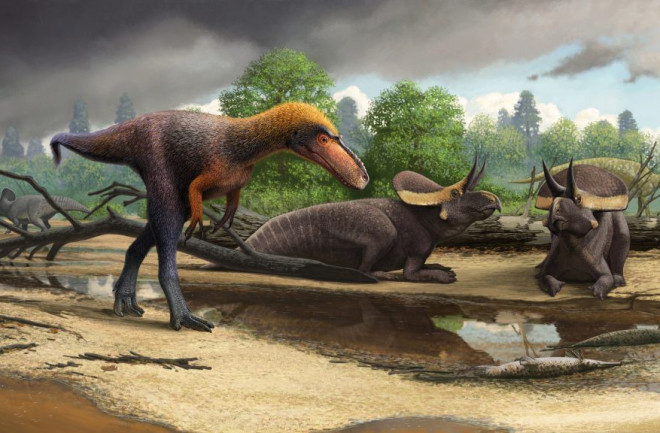 The newly-discovered, small tyrannosaur, Suskityrannus hazelae, circles a pair of Zuniceratops, a small and ancient relative of Triceratops. (Credit: Andrey Atuchin) In 1902, famed fossil hunter Barnum Brown was prospecting in Montana when he discovered the first documented remains of a Tyrannosaurus rex. The creature was nearly 40 feet long with banana-sized teeth, warranting its name, “king of the tyrant lizards.” Finds since then have only reinforced T. rex’s status as one of the planet’s most ferocious predators ever. We now know that — in a world of large plant-eaters — these hunters didn’t just rely on their enormous size, they had keen senses and were surprisingly smart. But a new mystery has recently emerged. Tyrannosaurs – the family that includes T. rex and dozens of its ancestors and relatives — lived on Earth for roughly 100 million years. And for most of that time, they were relatively tiny carnivores in a world dominated by much larger meat-eaters. The oldest known species, Proceratosaurus, was shorter than a human. So, how did these featherweights rise to become kings? Answering that question has been a major challenge for paleontology thanks to a troublesome gap in the fossil record created when sea levels rose during the Late Cretaceous period (80 million to 66 million years ago) and destroyed many fossils from the preceding era. This gap left scientists with a handful of tiny, ancient tyrannosaur fossils from early on, and a large number of super-sized tyrannosaur fossils from the dinosaurs’ final years. But in between was a question mark. Now scientists are making significant strides toward filling that gap thanks to two new tyrannosaurs from the American Southwest that lived more than 90 million years ago. The details of a small tyrannosaur from this era, discovered in Utah, were published earlier this year. A second find, this one from New Mexico, was published Monday in the journal Nature Evolution & Ecology.

Sterling Nesbitt was a teenager volunteering on a paleontological expedition back in 1998 when he found much of a two-legged dinosaurs’ skeleton in western New Mexico’s Zuni Basin. At the time, researchers knew little about what early tyrannosaurs should look like. So, the team confused Nesbitt’s fossils, as well as another specimen of the same species discovered 150 feet away, for a dromeosaur, a group that includes the relatives of velociraptor. But the find was a transformative experience for Nesbitt and pushed him to pursue a career in paleontology. And the fossils sat in storage until 2006, when he began bringing the fossils with him as he moved between research institutions. But as scientists started finding some truly tiny, ancient tyrannosaur relatives in Asia, the researchers realized what they had. This new tyrannosaur, named Suskityrannus hazelae, takes its title from the Zuni tribe’s word for coyote. It stood about three feet tall at the hip and stretched nine feet from nose to tail. (Some Great Danes and other dog breeds are even taller.) It was fleet footed and had a longer, more slender snout shape than the large tyrannosaurs that evolved millions of years later.And another similar, small tyrannosaur from the Southwest was announced earlier this year. That one, named Moros intrepidus, or harbinger of doom, lived 95 million years ago and is thought to have weighed less than 200 pounds as a full-grown adult. And, when standing erect, its head would've risen less than five feet tall.

“The discovery of Moros and Suskityrannus in the same yearis wonderful and just shows that there is lots more out there to discover,” says Nesbitt, now a paleontologist at Virginia Tech. He added: “Suskityrannus is a bit younger (~92 million years ago) so it helps us constrain when large tyrannosauroids got big and became top-tier predators. Additionally, we have lots more of the anatomy of Suskityrannus compared to Moros, so it helps fill in our knowledge of the anatomical systems during this transition.” However, because both Suskityrannusspecimens were juveniles, the researchers can’t say how big the predators would have ultimately grown, but they were still very small compared to their more recent relatives. They were likely about the same size as Moros. And, taken together, the two new species tell paleontologists that tyrannosaurs had yet to start evolving their enormous body sizes. They both lived at a time when plant-eating prey, like the ancient relatives of triceratops, were also much smaller. Larger animals had likely died off in a mini-mass extinction. And some scientists suspect that afterthe die-off, tyrannosaurs may have migrated across a land bridge from Asia following their prey. But there's little fossil evidence to support that idea. “Suskityrannus brings us one step closer to filling in the Late Cretaceous gap in tyrannosaur evolution,” says Lindsay Zanno, a paleontologist at North Carolina State University whose team discovered Moros and was not involved in this latest study. “The window of uncertainty has now shrunk to a little over 10 million years.” And scientists say not to read too much into the fact that the two juvenile tyrannosaurs were found about 150 feet apart at the same general site in the same sediment layer. There’s no evidence the animals interacted in life. “We really can't say anything other than they died about the same time,” Nesbitt says.