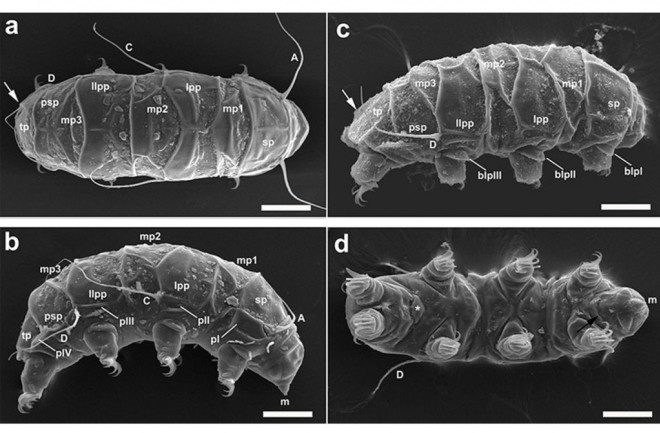 Meet Mopsechiniscus franciscae, the newest species of tardigrade, discovered in Antarctica. Credit: Sandra McInnes Tardigrades, also known as water bears or moss piglets, are tough as nails. They’ve been found all over the world from the peaks of mountains to the driest deserts to the barren cold of Antarctica. And now that frozen continent has yielded up a brand new species of the fascinating animal. If you’re at all familiar with these half-millimeter-long creatures, it shouldn’t surprise you that they would be perfectly comfortable in one of the most inhospitable places on Earth. They can survive temperatures near absolute zero, or thrive in boiling water. Dehydration, mass extinctions, radioactivity and even the vacuum of space are simply shrugged off by the mighty moss piglet. On top of all that, they’re even adorable under the microscope.

Researchers led by Roberto Guidetti from Italy's University of Modena and Reggio Emilia discovered the new tardigrade, which they named Mopsechiniscus franciscae, while on a trip to Victoria Land. The tiny water bear was roaming the lakeshore mosses within Crater Cirque, a natural bowl hollowed out by ancient glaciers. When researchers placed the Antarctic tardigrade beneath an electron microscope, they discovered their specimen possessed unique physical attributes, such as reddish pads behind its claws and a distinct pattern of hairs on its body. A subsequent DNA analysis confirmed the researchers were working with a new species.They published their findings in the journal Polar Biology.

Despite tardigrades' resiliency, they still seem to prefer highly specialized habitats — and Antarctica isn’t home to many. Researchers believe the new species of tardigrade in Antarctica probably descended from a long line of forebears that lived on the ancient supercontinent of Gondwana. The Antarctic tardigrade’s more primitive physical characteristics, as compared to other tardigrade species, suggest it's more closely related to distant water bear ancestors.