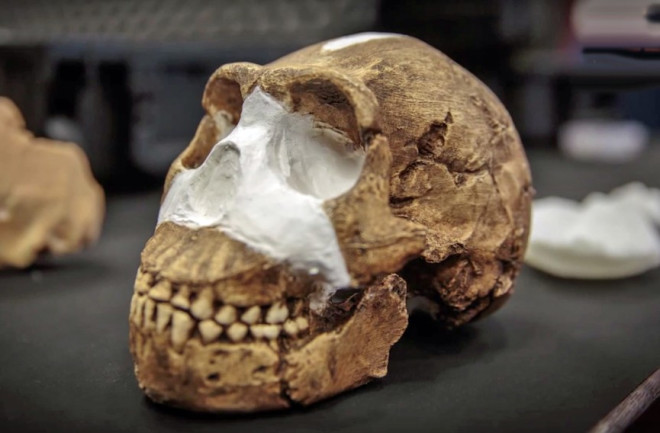 Screenshot via Barcroft TV. A brand-new species of human ancestor has been identified from a wealth of bones in a cave in South Africa. The new species, Homo naledi, likely lived 2.5 to 2.8 million years ago, at the very root of the Homo lineage.

Meet the newest, ancient member of the family #HomoNaledihttp://t.co/SouwiZ5lt5pic.twitter.com/aXgrZsVALN

The bones were found behind a limestone wall in the Rising Star cave. In all, more than 1,550 fossil pieces representing at least 15 individuals have been recovered, and more are expected to lie in the soft dirt. That makes H. naledi one of the best-known fossil members of our lineage. The name naledi means “star” in Sesotho, a local South African language — a nod to the cave where the species was found. The scientists announced the discovery in two

published this week in the open-access journal eLife.

What Is Homo naledi?

The papers describe a species with long legs, feet that look very much like ours, but with apelike, curved hands and a small brain. According to the

At a news conference on Wednesday, John Hawks of the University of Wisconsin, Madison, a senior author of the paper describing the new species, said it was “unlike any other species seen before,” noting that a small skull with a brain one-third the size of modern human braincases was perched atop a very slender body. An average H. naledi was about five feet tall and weighed almost 100 pounds, he said.

So you have seen the #NalediaFossils Want a closer look at #HomoNaledi standing up? pic.twitter.com/elpr7XIh7e

However, because the bones have not been dated yet, it's hard to definitively place them in the human lineage. Speaking to the Guardian

, some scientists expressed the need for caution:

“If they are as old as two million years, then they might be early South African versions of Homo erectus, a species already known from that region. If much more recent, they could be a relic species that persisted in isolation. In other words, they are more curiosities than game-changers for now,” said William Jungers, an anthropologist at Stony Brook School of Medicine in New York.

What's more, it appears that H. naledi had some remarkable cultural practices. The placement of the bones in the cave chamber could be deliberate, according to the study authors. "We've come to the conclusion that this species of non-human hominid was deliberately disposing of its dead, taking the dangerous journey into this deep chamber to place its dead or drop its dead in a place inaccessible by any other — something prior to this we thought was maybe unique to humans," said