New Species of Dinosaur Found in Utah Was Triceratops Cousin 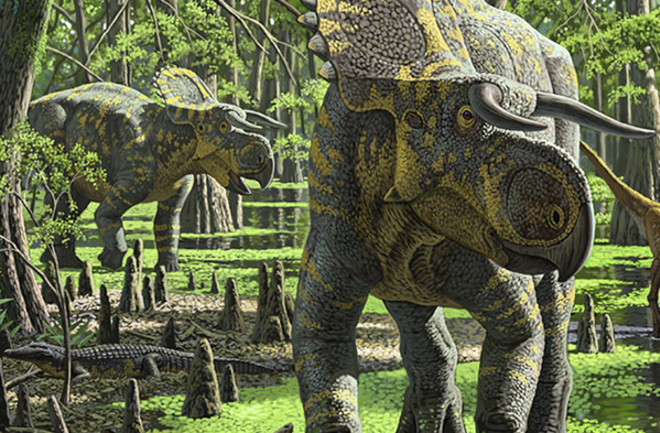 Nasutoceratops titusi in its forest environment of the Kaiparowits Formation. By Raúl Martín Paleontologists in Utah have not only discovered a new species of dinosaur; the recently described skull actually represents an entirely new genus with an unusually large nose and long, front-facing horns. During the late Cretaceous period, an elevated sea level split North America in two. The western landmass was called Laramidia and included what is now the west coast of Canada and the United States. This swampy region was filled with all kinds of dinosaurs. In fact, it was the greatest documented radiation of dinosaurs anywhere during the entire Mesozoic era. (Also known as the Age of Reptiles, this era refers to all of the Triassic, Jurassic and Cretaceous periods put together.) During this time, the ceratopsidae family had the greatest number of species, including the triceratops. These related species were notable for their unique nose horns and head frills. Researchers think these boney features were partly for fighting and partly for nonverbal communication (recognizing members of their own species or competing for mates). The ceratopsidae family evolved quickly to produce the most diverse family tree of any dinosaur in Laramidia.

An artist's rendition of Nasutoceratops. Image courtesy of Lukas Panzarin Researchers think ceratopsidae's boney features were partly for fighting and partly for nonverbal communication (recognizing members of their own species or competing for mates). The ceratopsidae family evolved quickly to produce the most diverse family tree of any dinosaur in Laramidia.

The vast majority of skeletons from this era have been recovered from the northern reaches of the region: Alberta, Montana and Alaska. That was until paleontologists in Utah dug up a 75-million-year-old skull alongside forelimbs and a few vertebrae in 2006. The newfound noggin measured six feet long and had an unusually large nose horn and plate-like frill resembling those of the rest of its family. But the size and placement of these features set it apart from its relatives. The horns, for example, are longer and extend forward instead of up.

The nasutoceratops skull uncovered in Utah. Image courtesy of Rob Gaston. The rest of the beast would have been about 15 feet long and would have tipped the scale at 2.75 tons, according to the description published in Proceedings of the Royal Society B today. It ate plants and walked on all fours. The naming of the species is predictably logical, if complicated-sounding: Nasutus (large-nosed) + ceratops (horn-faced) + titus (Utah paleontologist Alan Titus) = Nasutoceratops titusi.  Researchers believe this taxon is unique to the southern reaches of the region. And the findings support the theory that there was a distinct but little-known population of dinosaurs thriving in the Laramidian South, not just the North. It also shows how quickly this family would have had to evolve during its million-year-heyday to create two unique populations---one in the North and one in the South---each with its own diversity of species. Hats off to you, Nasutoceratops...since you can't fit a hat on your large-nosed, horn-faced head anyway.