New Species of Desert Spider Cartwheels Out of Harm's Way 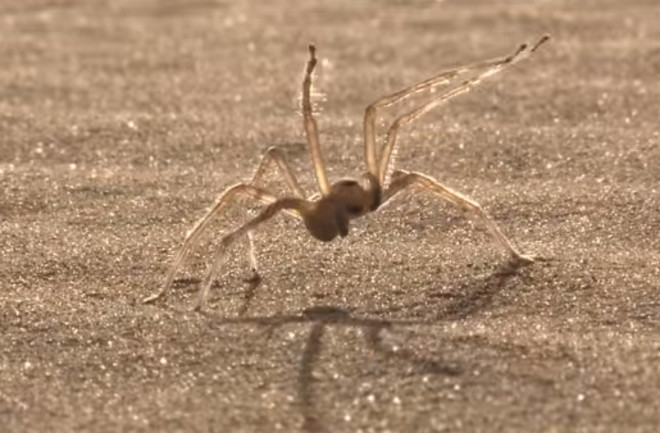 This desert spider executes a series of flips to avoid predators. (YouTube screenshot). When this newly discovered desert spider finds itself in danger, it flips out — literally. Peter Jäger, a taxonomist at the Seckenberg Research Institute in Germany, recently identified the new species of spider which lives in the desert of southeastern Morocco. Jäger nicknamed the spider "flic-flac" for the gymnastic flips it performs to avoid predators, the New York Times reports.

The spider, officially named Cebrennus rechenbergi, is a nocturnal creature that emerges nightly from its silk-woven, tube-like domicile in the sand to search for food. If threatened during its hunt, the spider executes the flipping maneuver, which increases its speed from 3.3 feet per second to 6.6. The spider can “flic-flac” uphill, downhill and on flat ground. Unfortunately, the unique evasive technique consumes a lot of energy. If it performs this trick five to 10 times within one day, it will die, Jäger told the New York Times. Jäger determined that the flic-flac spider was indeed a new species based on minute differences in its sex organs from the closely related Cebrennus villosus in Tunisia. He published his findings April in the journal

Ingo Rechenberg, a bionics expert from Berlin, was the first to discover the flic-flac spider on an expedition to Morocco. He passed it on to Jäger for taxonomic identification. Rechenberg, inspired by the spider’s mode of locomotion, designed a spider robot that moves in a similar fashion across the sand, according to Science Daily. Take a minute to watch the video and enjoy the spider's dizzying gymnastics, and the technology it inspired.