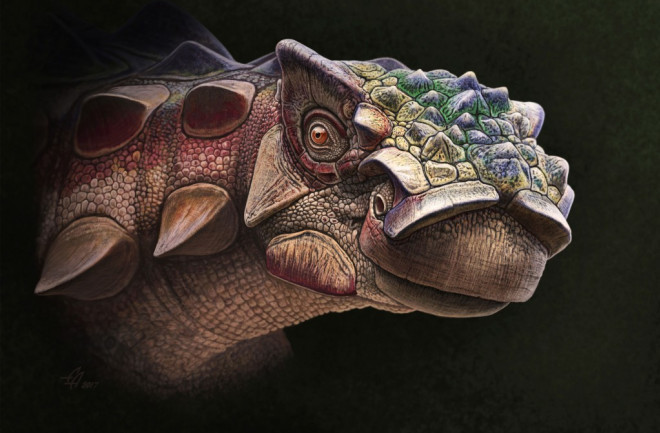 Akainacephalus johnsoni sported prominent spikes along its skull and snout. (Credit: Andrey Atuchin/Natural History Museum of Utah) Scientists revealed a new species of armored dinosaur at the Natural History Museum of Utah on Wednesday. The animal, a species of ankylosaur, lived in a wet, tropical environment in what’s now Southern Utah roughly 75 million years ago. The herbivore sported spikes across its head and an intimidating tail club for fending off large predators like the tyrannosaurs that also roamed the landscape. Scientists dubbed it Akainacephalus johnsoni. “Literally translated, it means spikey head,” says Jelle Wiersma, lead author of a study on the dinosaur published in the open-access journal PeerJ. Its age makes it the oldest ankylosaur known from North America. And, based on its appearance, researchers say it was more closely related to Asian ankylosaurs than many known from the United States. That offers some clues the animals’ evolutionary past. “We know that the ankylosaurid dinosaurs migrated over from Asia into North America,” Wiersma says. But the details were foggy.

Back in 2007, Bureau of Land Management paleontologist Scott Richardson was hiking across Grand Staircase-Escalante National Monument near a dinosaur-rich area called Horse Mountain. As he trudged through a shrubby wash, he spotted a dinosaur toe bone. “I looked up, climbed the ridge and pulled out a slab of bone,” Richardson says. Following the rockfall uphill led him to the remains of a well-preserved duck-billed dinosaur — complete with skin impressions — called a gryposaur. In the years that followed, scientists found fossils from all manner of Cretaceous Period creatures buried at the site, including turtles and the oldest caiman, a kind of croc, known to science. Eventually, paleontologists also discovered the remains of Akainacephalus johnsoni. Its distinct horned skull and tail, complete with club, were all there. (The reconstructed skeleton was revealed Thursday on display at the museum near the gryposaur found at the same dig site.) Then, a volunteer named Randy Johnson, who the dinosaur is now named for, prepared the animal’s skull, meticulously extracting it from the rock. But the team was surprised by what Johnson’s sculpting revealed. Its bony head armor was more like that of Asian ankyloaurs than ones from North America. And while scientists knew the group originated in Asia some 125 to 100 million years ago, they don’t appear in North America until roughly 77 million years ago. “A reasonable hypothesis would be that ankylosaurids from Utah are related to those found elsewhere in western North America, so we were really surprised to discover that Akainacephalus was so closely related to species from Asia,” says Natural History Museum of Utah paleontologist Randall Irmis.

The scientists now say they suspect ankylosaurids migrated across the Beringian land bridge during one of the brief periods when sea levels were low. Other dinosaur species — and later, humans and many other animals — also crossed this intermittent land bridge to reach the new world. "The Late Cretaceous was what we call a hothouse world," Irmis says, "there were no permanent polar ice caps, the average global temperature was much higher, as were atmospheric carbon dioxide levels. As such, Beringia would been a fairly lush temperate ecosystem." That allowed dinosaurs, crocs and large conifer trees to live in what's now Alaska. "It would have been cold during the winter, and may have gotten snow, but you wouldn't have permafrost or major ice pack in the sea like today," Irmis says. So sea levels were the main thing limiting dinosaur migration between Asia and America. And during the Late Cretaceous, the final era of dinosaurs, the land bridge existed just two times. The first existed 80 to 77 million years ago when ankylosaurs arrived. The second existed 70 million years ago, when the tyrannosaurids, ceratopsids and hadrosaurids crossed over into Asia. And that's not the only mystery Akainacephalus johnsoni helps solve. The new anyklosaur's tail club also helps explain the mystery of why so many tyrannosaur fossils found in the southern Utah have broken leg bones. “They weren’t tripping on logs, they were getting their shins whacked in,” says Bureau of Land Management paleontologist Alan Titus, who was also instrumental in working the site. As pointed out at today's announcement, this is the first ankylosaurus dinosaur known from Utah, but it won’t have that distinction for long. Paleontologists also recently discovered the remains of another ankylosaur species on the other side of Horse Mountain not too far from Akainacephalus. That discovery is currently being prepped for publication.