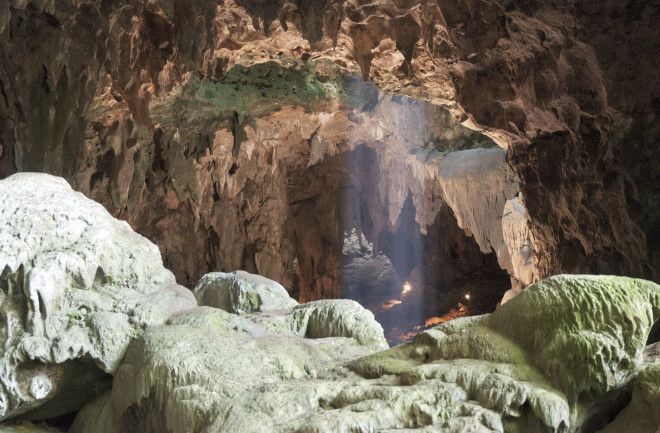 Remains preserved in Callao Cave include several teeth with traits that established the individuals belonged to the genus Homo — but also raised questions about their evolution. (Credit: Callao Cave Archaeology Project)

At the northern tip of the Philippine island of Luzon lies Callao Cave, an expansive, seven-chamber limestone warren. In April, researchers reported in the journal Nature that they’d uncovered the bones of a now-extinct, previously unknown human species near the far end of the first chamber. The discovery adds to growing evidence that human evolution and dispersal out of Africa is much more complicated than scientists once thought — and that we’re just starting to understand Southeast Asia’s role in that story.

“There is no reason why archaeological research in the Philippines couldn’t discover several species of hominin,” Philip Piper, an archaeologist at the Australian National University who coauthored the new research, said in a statement. “It’s probably just a matter of time.”

In 2007, Piper and an international team of researchers discovered a foot bone in Callao Cave that belonged to a member of the genus Homo, though they were unable to determine which species.

Remains preserved in Callao Cave include several teeth with traits that established the individuals belonged to the genus Homo — but also raised questions about their evolution. (Credit: Callao Cave Archaeology Project)

Researchers continued to excavate the cave, eventually unearthing more bones — plus seven teeth — from three individuals who lived at least 50,000 years ago. That date would mean they were alive at the same time as Neanderthals, Denisovans and our own species, as well as Homo floresiensis, short and small-brained ancient humans who lived in Indonesia.

The Callao Cave bones have a unique combination of primitive and modern human traits, leading the researchers to classify them as an entirely new species: Homo luzonensis.

The seven teeth found were of particular interest to the researchers. Oddly small molars are similar in shape to those of H. sapiens. However, they also have features that resemble the molars of H. erectus, a much earlier human species that dispersed out of Africa about 2 million years ago. And parts of the premolars of H. luzonensis resemble those of H. floresiensis.

Meanwhile, the curved shape of the toe and finger bones of H. luzonensis look like those of australopiths, human predecessors that lived some 3 million years ago.  That means H. luzonensis likely spent some of its time climbing in trees — even though other Homo species were ground-dwellers by this point.

The discovery of H. luzonensis on an island that was never connected to mainland Asia, and which would have required a significant sea crossing to reach, adds to the mystery surrounding the latest addition to our family tree.

[This story originally appeared in print as "New Member of Our Family Tree Found in Philippines."]