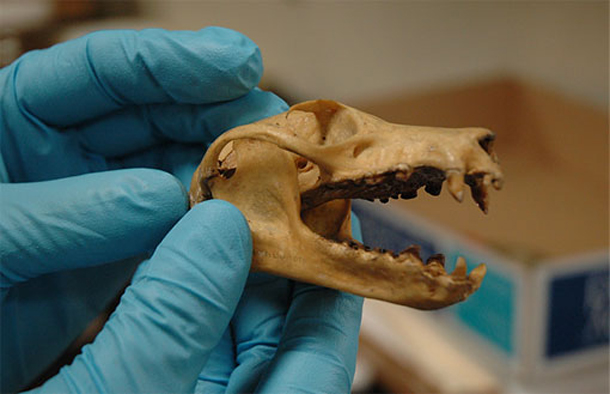 When the fruit bat Pteropus allenorum was finally described by scientists, it was already extinct. One specimen of the bat was shot in Samoa in 1856, skinned, stored in alcohol, and shipped to the United States. It spent the next 153 years, inconspicuous and ignored, on a shelf in the Academy of Natural Sciences in Drexel University. When bat specialist Kristofer Helgen visited the museum, he immediately recognised that it was a new species. Sadly, it was too late. There are no fruit bats in Samoa nowadays, so the jar on the shelf represents our only encounter with this now-extinct animal. The fruit bat’s story isn’t an original one. The beetle Meligethes salvan was collected from the Italian Alps in 1912 and sat in Frankfurt’s Senckenberg Museum until it was described in 2003. In the intervening time, the valley from which it came had been almost entirely destroyed in the process of building a hydroelectric power plant. Biologists searched in the nearby valleys but couldn’t find it. The beetle may be extinct. These examples show that the shelves and drawers of the world’s museums are among the planet’s most diverse habitats—ecosystems brimming with different species, many of which have never been seen before. People often think that discoveries are made when biologists see new species in the field, and immediately recognise them as such. That’s largely not true. Field biologists often collect their specimens en masse, taking them back to their respective institutions, and keeping them in storage until they get a chance to peer at them properly. This means that many of the planet’s new species are sitting pretty in jars and drawers, gathering dust while they wait to be formally described. How long is this shelf life? For the bat, it was 153 years, and for the beetle, 92. On average, it’s around 21 years, according to a new study from Benoît Fontaine from the Natural History of Museum in Paris. Fontaine calculated the figure by considering 600 species, randomly chosen from the 17,000 or so described in 2007.The species hailed from all the kingdoms of life, and on average, they sat on their shelves for 20.7 years before coming to the light. Some were described almost immediately. The record-holder for the longest delay was an Indonesian pit viper that waited for 206 years! (It belongs to a large family of south-east Asian snakes, where individual species come in radically different colours and have been given many synonymous names.) Several factors can speed things up. Some are obvious: If scientists have recently revised a group’s evolutionary relationships, species are described more quickly because it’s easier to identify something that’s new (the pit viper is a glaring exception to this trend). Other trends were more surprising: Marine species took less time to describe than land-living ones, and Fontaine has no idea why that might be. Fontaine also found that the best-studied groups, including plants, back-boned animals and insects, spend longest on the shelf than other groups. That’s probably because the vaults of museums and botanical gardens are flooded with vast collections of these families, which take more time to work through. For similar reasons, scientists in developed countries take longer to describe species than those in developing ones; and amateurs take less time than professionals. The pros tend to make descriptions using archived collections, while amateurs and those in the developing world do more direct field work. Fontaine also suggests that amateurs get recognition by describing new species and have incentives to do so quickly; professional scientists are more concerned by publishing in top-tier journals and securing grants, “both achievements rather at odds with baseline species descriptions”. To reduce these shelf lives, Fontaine offers two obvious solutions. First: train and create jobs for more taxonomists—individuals with the skill (and time) to identify, describe and classify a new species. Second: conduct more field work to collect more specimens. Many taxonomists will not describe a new species based on a single sample. Until more field trips are done, and more samples arrive, mystery creatures stay shelved. “We need to raise awareness about the importance of taxonomy,” says Fontaine, because we are running out of time. At a very rough estimate, we’ve yet to identify around 80 percent of living species, and many of these may go extinct in the next few decades. “It’s a matter of emergency, if we do not do it now, we will never be able to study, know and enjoy this biodiversity.” Just as astronomers are only now seeing the light of stars that exploded out of existence millions of years ago, tomorrow’s taxonomists might “discover” new species that were already wiped out in the time it took to take them off their shelves. Reference: Fontaine, Perrard & Bouchet. 21 years of shelf life between discovery and description of new species. Current Biology, citation tbc. Image from ANSP