New Massive Pterosaur Named the ‘Cold Dragon of the North’ 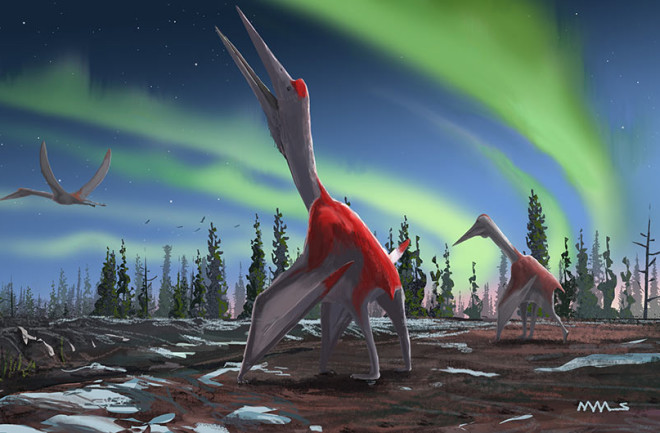 A new pterosaur dubbed the “Cold Dragon of the North” is one of the largest ever. (Credit: David Maas)

(Inside Science) — A new species of giant pterosaur has been discovered in the Dinosaur Park Formation in Alberta, Canada, whose snowy, windy winters gave Cryodrakon its name. Based on the largest vertebra yet found of this species, adults may have possessed wingspans of roughly 10 meters (33 feet).

“That’s an animal probably comparable to a giraffe in height — more than 4 meters [13 feet] — and maybe 200 kilograms [441 pounds] or so, though estimates of mass especially vary a lot for this group,” said study lead author David Hone, a paleontologist at Queen Mary University of London.

Cryodrakon was a kind of azhdarchid, a group of pterosaurs named after the azhdar, a mythical Persian dragon. The azhdarchids included the largest flying creatures of all time, such as Quetzalcoatlus from Texas. Prior work suggested many previously unearthed Cryodrakon fossils were Quetzalcoatlus, but the new findings suggest Cryodrakon’s skeleton was distinctly more robust.

Although these fossils were unearthed in desolate badlands, the area had a climate similar to the Mediterranean back when Cryodrakon was alive, about 75 million years ago. Crocodile fossils were also found in this region, “which always rule out very cold temperatures,” Hone said.

Despite their likely capacity to cross oceanic distances in flight, “we think generally these were animals that lived more inland,” Hone said. “They would have eaten any small animals they could — baby dinosaurs, mammals, lizards, and so on — and may have scavenged too.” They may have been prey for large predators such as tyrannosaurs and crocodiles, he said.

Scientists only know azhdarchids from limited, fragmentary remains, which has made it difficult to understand their biology and evolution. These new findings reveal that azhdarchids in what is now North America were potentially less homogenous and more diverse than previously suggested.

Hone and his colleagues plan to investigate the internal structure of this pterosaur’s humerus, corresponding to the human upper arm bone, to see where the bone was strongest, which should in turn yield insights on how the reptile flew, walked, took flight and landed, Hone said.

The scientists detailed their findings Sept. 10 in the Journal of Vertebrate Paleontology.