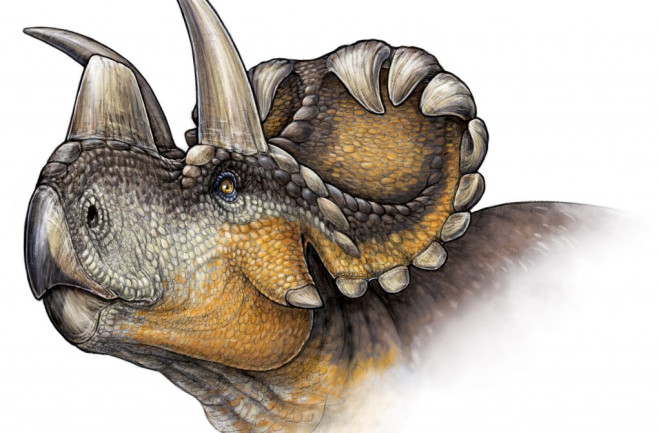 Triceratops is one of the most iconic dinosaur species we know, in part because of its distinctive looks: a large head frill, two huge brow horns, and another horn on its nose.

And now it’s got a new cousin. Researchers have discovered a remarkable new species of ceratopsian called Wendiceratops pinhornensis that lived 79 million years ago.

As one of the oldest specimens of the horned dinosaur family, Wendiceratopsmight help answer why, precisely, these horns and frills evolved.

Though Triceratops was first discovered back in 1889, paleontologists are still undecided on why it evolved its horned face. Were the horns used for display, perhaps for attracting a mate, or were they used for defense or combat?

Wendiceratops might help answer these questions. More than 200 bones of four individuals were found in the fossil graveyards of Alberta Canada, where hundreds of dinosaur fossils have been found over the years. Close by, teeth belonging to a relative of T. rex were also found, hinting at the ancient rivalry between these two groups.

Researchers have pieced together the dinosaur’s appearance and found some unique twists. Wendiceratops was approximately 20 feet long and weighed more than a ton, making it decidedly smaller than Triceratops. It also had horns that were uniquely curved forward to form bizarre bony hooks, and an elaborate frill for such an early member of the horned dinosaur family. Finally, the species appears to have had a tall nose horn, possibly the earliest documented species to have one.

“Wendiceratops helps us understand the early evolution of skull ornamentation in an iconic group of dinosaurs,” said David Evans, co-author of the study published in PLOS ONE.

But what does this tell us about what the horns were used for, and what their evolutionary origins were?

The new species adds to the array of facial shapes sported by ceratopsians. This diversity may have been beneficial for species to tell each other apart, says paleontologist Susie Maidment, who was not involved in the research.

Thomas Cullen, a researcher at the ROM but not involved directly with the study, expressed a similar hypothesis: “If I had to speculate, I’d say that the frill ornamentation was likely used for species recognition or display, though the latter explanation is difficult to prove given the lack of sexual dimorphism in these animals.”

Other researchers, however, say that the horns point toward a more violent purpose. “The locked horns of two Wendiceratops could have been used in combat between males to gain access to territory or females,” says study co-author Michael Ryan.

However, if this were the case, we’d expect to see signs of injury on the frill bones, which don’t appear to be present in the few fossils of Wendiceratops. They are, however, present in some of the hundreds of studied Triceratopsfossils.

This finding comes just weeks after the discovery of another new ceratopsian species, Regaliceratops, from a team at the Royal Tyrell Museum of Canada. Together, these new discoveries show that despite the fact that we’ve known about ceratopsian dinosaurs for over a century, many questions remain about how they lived and interacted millions of years ago.