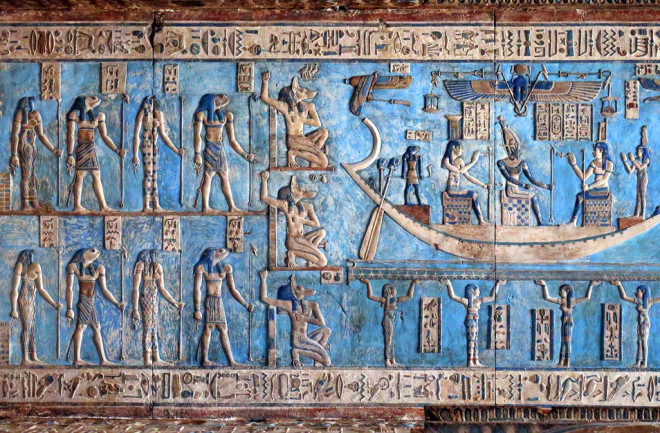 Hieroglyphic carvings and paintings on the interior walls of an ancient Egyptian temple in Dendera (Credit: Kokhanchikov/Shutterstock)

“Man perishes; his corpse turns to dust; all his relatives pass away. But writings make him remembered in the mouth of the reader. A book is more effective than a well-built house or a tomb-chapel in the west, better than an established villa or a stela in the temple!”

Those prescient lines were written over 3,000 years ago, in ancient Egypt. They are part of a new book offering fresh translations of Egyptian hieroglyphics by Toby Wilkinson, an Egyptologist at the University of Cambridge. For the book, called “Writings From Ancient Egypt“, he gathered texts from poets, scribes, priests, storytellers and everyday citizens spanning some 2,000 years of Egyptian civilization to present a tantalizingly personal glimpse into a society defined today mostly by pyramids and mummies.

“It’s always struck me that people think of Egypt as a civilization that produced great art and great architecture, the pyramids, the temples and so forth, but we’re missing a huge dimension of that society if we fail to engage with the writing that the ancient Egyptians left behind,” says Wilkinson.

Egyptian writing extends far beyond the hieroglyphics that adorn tomb walls. They used papyrus paper and ink to jot down poems and tales, pen memoirs, write wills and send personal letters, most often in the simplified hieratic and demotic scripts derived from hieroglyphics. The texts gathered in the book, which comprise merely a fraction of what they put to papyrus, include samples authored by characters from all levels of society, providing a counterpoint to the god-kings in museum exhibits that often stand in for the entirety of Egyptian society today.

We have been able to read the Egyptians’ writing ever since the translation of the Rosetta Stone in 1803, but most of it has remained the purview of scholars. Wilkinson says that most texts dealing with their writing are kept in university libraries, written dryly and meant for academics. He aims to introduce the writings to a broader audience and hopefully illustrate an oft-overlooked fact about Egyptians: that they were people too.

“It turns them into real people, rather than just the inhabitants of a long [ago], far-off and sort of remote civilization, they really shine through these writings as people like you and me with the same sort of hopes and fears and interests,” says Wilkinson.

There is, for example, the tale of a sailor trapped on a desert island with a giant snake possessing eyes of lapis lazuli that bears similarities to more modern fairy tales and mythical journeys. On a more prosaic level, the collection includes a letter from a minor landowner to his steward, conveying instructions about a misbehaving servant:

“Now have that housemaid Senen thrown out of my house – see to it – on whatever day Sahathor reaches you. Look, if she spends a single day (more) in my house, act! You are the one who lets her do bad things to my wife. Look, how have I made it distressful for you? What did she do against you (to make) you hate her?

And greetings to my mother Ipi a thousand times, a million times. And greetings to Hetepet and the whole household and Nefret. Now what is this, bad things being done to my wife? Enough of it! Are you given equal rights with me? It would be good if you stopped.”

Wilkinson identifies a clear shift in perspective as time goes on. Writings in archaic Egyptian meant for the priests and nobles give way to plain-language compositions that reflect the broadening influence of the middle class.

One such example of a composition with a clear preference for plain language is “The Great Hymn to the Orb,” written during the reign of Akhenaten from 1353-1336 BC in the 18th Dynasty. It praises the sun, characterized here as a deity in its own right:

“You shine forth in beauty on the horizon of heaven,

When you rise on the eastern horizon,

You fill every land with your beauty.

High over every land,

Your rays encompass the lands

To the limit of all that you have made.

For you are the sun, you have reached their limits,

You subdue them for your beloved son.

You are distant (yet) your rays are upon the earth.

You are in (every) face (yet) your movements are unseen.”

The text of "The Great Hymn to the Orb" inscribed inside the tomb of Ay at Amarna. (Credit: Toby Wilkinson)

The text of “The Great Hymn to the Orb” inscribed inside the tomb of Ay at Amarna. (Credit: Toby Wilkinson)

The importance of hierarchy is reinforced, a dominant theme of Egyptian society, throughout the corpus of writings. An entire class of writing called “teachings” was dedicated to imparting wisdom and morality, and often included instructions on how to act around those of different social classes, Wilkinson says. The role of the king in maintaining the balance of the universe was heavily emphasized, as well. Taken together, the writings paint a picture of a society permeated almost completely by the influence of the pharaoh.

Egyptian writers also had fun: one text called “The Satire of the Trades” offers a scribe’s perspective on various professions, each compared unflatteringly to his own. The Egyptians shared some of our vices, as well — a work called the “Teaching of Ani” penned during the 18th Dynasty offers this advice on drinking:

“Do not indulge in drinking beer lest bad words come out of your mouth without you knowing what you are saying. If you fall and hurt yourself, no one will give you a helping hand. Your drinking companions will stand around saying, ‘Out with the drunkard!’ If someone comes to find you and talk to you, you will be discovered lying on the ground like a little child.”

While the best off Egyptians ensured that they would be remembered for millennia, their magnificent burial chambers reveal only a fraction of Egyptian society. To peer through the eyes of the men and women who built the temples and worshipped the kings who would become mummies, we must turn to the words they left behind.