New "Dreadnoughtus" Dinosaur Was One of World's Largest 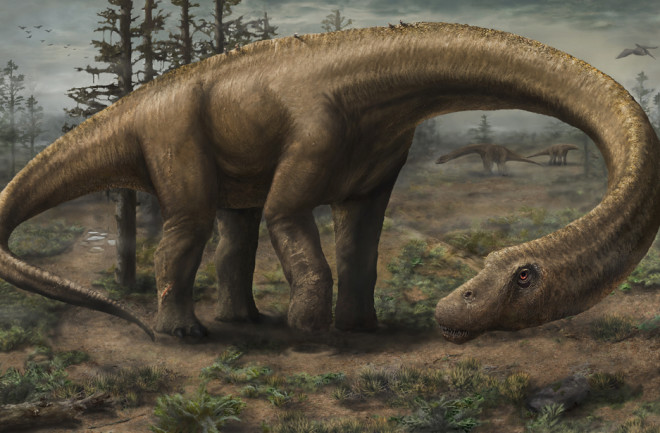 An artist's rendering of Dreadnoughtus schrani. (Credit: Jennifer Hall) The NFL’s season officially opens tonight as Seattle and Green Bay duke it out in prime time. But if you placed both teams’ 53 players on a scale, their combined weight would only be a fifth of a newly discovered supermassive species of dinosaur dubbed Dreadnoughtus schrani. Weighing in at more than 65 tons and measuring 85 feet from head to toe, Dreadnoughtus is among the largest dinosaurs belonging to the gigantic family known as titanosaurs. To date, it is the most complete skeleton of a gigantic dinosaur, which allowed researchers to accurately calculate its size.

Dreadnought is an Old English word that means “fear nothing,” and at seven times the size of a Tyrannosaurus rex, researchers say the aptly named Dreadnoughtus was nearly impervious to attack. The new dinosaur lived roughly 77 million years ago in temperate forests on the tip of what is now South America. Like other titanosaurs, Dreadnoughtus was a vegetarian. Researchers believe the dinosaur died when the ground beneath its feet turned to quicksand after a large flood, based on sedimentary deposits found at the site, the Independentreports. It took researchers five years to unearth the skeleton, and the bones were shipped to Philadelphia in 2009. Researchers have since digitally scanned the bones to create 3-D models of the dino, to study its movements. The skeleton will eventually be returned to Argentina. Researchers published their description of the new species Thursday in the journal Scientific Reports.

The Dreadnoughtus dig turned up more than 45 percent of the dinosaur's total skeleton. By comparison, previous archeological discoveries of gigantic dinosaurs have yielded between 1.6 percent and 15.2 percent of an entire skeleton. With a more complete skeleton, researchers hope to learn more about gigantic dinosaurs’ anatomy, biomechanics and evolution. Already, the bones of Dreadnoughtus have revealed something very intriguing: The massive creature was still growing at the time of its death. Dreadnoughtus, already weighing more than a small village of people, never quite grew to his full potential.