The triceratops' cousin is not only a new species; it's a whole new branch on the dinosaur family tree. 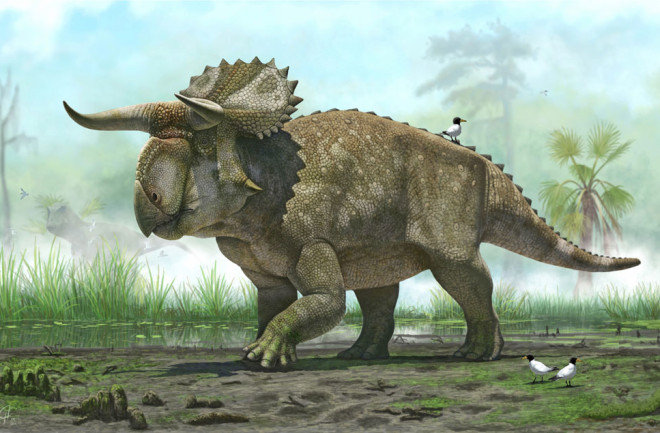 The massive Nasutoceratops titusi wandered Earth 76 million years ago. Its fast-paced evolutionary trajectory may have increased its chances of reproductive success ... before it went extinct. | Andrey Atuchin

When paleontologist Scott Sampson dug up a nearly 6-foot Nasutoceratops titusi skull in Utah in 2006, he also uncovered hints of what life was like 76 million years ago for creatures on the hot, half-flooded landmass called Laramidia.

“Nasutoceratops represents not just a new dinosaur, but a previously unknown branch of the horned dinosaur family tree,” Sampson says. That family, including the well-known Triceratops, had knobby noggins thought to attract mates and keep competitors at bay.

Nasutoceratops titusi’s simple frill, stout snout and unusually long horns contrast sharply with the “elaborate bony bells and whistles” of its contemporaries, says Sampson, who published a description of the species in July.

Sampson says such variation was probably prodded by sexual selection, which can drive big, fast-paced evolutionary changes to increase a male’s chances of reproductive success. The result? Horned dinosaurs evolved in only 5 million to 8 million years to become the most diverse dinosaur family on the ancient landmass, Sampson says.

[This article originally appeared in print as "New Dino Struts His Stuff."]