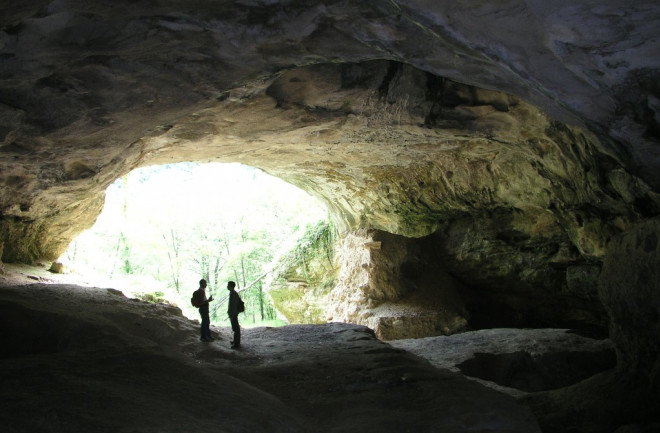 Dating of Neanderthals gone awry? Remains of our hominin cousins previously found in Croatia's Vindija Cave return to the spotlight with new research that claims earlier studies got their age very wrong. (Credit Ivor Karavani) With every new find, our understanding of the twilight of the Neanderthals, our nearest hominin kin, advances. Or not. New research on some of the most famous Neanderthal fossils, from Croatia's Vindija Cave, suggest earlier analysis about their age and significance may be all wrong. Oops. More than 40 years ago, researchers in Vindija Cave unearthed hominin bones and a curious assemblage of stone and bone tools that seemed to be a mixed bag of technology styles: Some were of the type traditionally assigned to Neanderthals, while others seemed to have been made by anatomically modern humans (AMHs) who, according to the conventional human evolution and migration timeline, first arrived in Central Europe from our African homeland around 40,000 years ago. (Faithful Dead Things readers know I think that conventional timeline needs an overhaul, if not a complete rebuild, as evidence comes to light — most recently in Australia and Indonesia — pointing to a much earlier Homo sapiens dispersal. But I digress). The Vindija hominins, which turned out to be Neanderthals, have been hugely significant for science. In 2008, for example, researchers were able to sequence the first entire mitochondrial genome of a Neanderthal from one of the individuals at Vindija. But it's arguably their age that has drawn the most interest over the past few decades. In 1999, researchers used direct radiocarbon dating to find an astoundingly early date for them of about 28,000-29,000 years ago. In 2006, however, a team (including some of the same researchers) took another crack at the remains with direct radiocarbon dating and determined an age of about 32,000 to 34,000 years. Before we go any further, by the way, for folks who like to offer tedious commentary along the lines of "See? The scientists can't make up their minds/don't know what they're talking about/are wrong again and therefore evolution is not a thing," let me explain once more: This is how science works. It's about testing and retesting and, depending on the results, revising previous conclusions and testing again and developing a whole body of evidence that, eventually, points to a single conclusion. And yeah, evolution is a thing. Neanderthals and Humans and Dating: It's Complicated Okay, back to Vindija. Whether you go with the 1999 research or the 2006 revision, both date ranges are recent enough that this population appeared to be among the last, if not the actual final holdout, of Neanderthals. In fancy paleoanthro talk they appeared to be a "refugial population" that survived, isolated, after the rest of their kind had gone the way of every other archaic hominin. Those previously proposed ages also suggested that the Vindija Neanderthals had occupied the same slice of time, in the same region, as AMHs, and possibly interacted with them, perhaps through trading and even interbreeding. I don't need to detail how interbreeding would have gone down, but the idea of trading was of particular interest to many researchers studying Vindija because of the mix of Neanderthal and AMH artifacts apparently deposited together. Was it the first interspecies swap meet? In a study published today in PNAS, however, a new and more accurate approach to dating the remains reveals that the Vindija Neanderthals are a lot older than anyone thought, and that it's possible the mix of artifacts has nothing to do with hominins of any species and everything to do with a bear. Yes, a bear. Another discovery: The team behind today's study also found a whole new Neanderthal bit by using a recently-created technique called ZooMS to identify previously unidentifiable bone fragments. To date the remains this go-round, researchers still used radiocarbon dating. But this time they dated the amino acid hydroxyproline extracted from collagen preserved in the bones and prepped it in a way that does a particularly fine job of removing contaminants.

Fancy multi-angle view of one of the Neanderthal bones found in Vindija Cave, Croatia. (Credit Thomas Higham) The results: All of the remains were more than 40,000 year old, and the newly-identified fragment may be up to about 48,000 years old. Showing Their Age In addition to the Neanderthals, the researchers also dated assorted animal bones and one of the artifacts, a bone point (they tried to date more tools, but their methods required a sufficient amount of preserved collagen and they came up empty in the other attempts). They found a range of dates for these items despite being from the same level of the cave excavation, and most of the animal bones tested belonged to bears. Taking all the evidence together, the team concluded it was most likely that a cave bear hanging out in Vindija, lolling about as cave bears do in all its half-ton glory, probably disturbed the layers of stuff that had accumulated in the cave over millennia and mixed it all up. So, at least based on today's date revision, the Neanderthals of Vindija were not the last members of their species. Not by a long shot. Instead, it appears they lived (and died) millennia before the end times for their kind. It also appears that the Vindija Neanderthals were long gone from this mortal coil before the first AMHs set foot in Europe. If, of course, you believe the conventional timeline for our dispersal from Africa is correct. We'll see about that. Stay tuned.