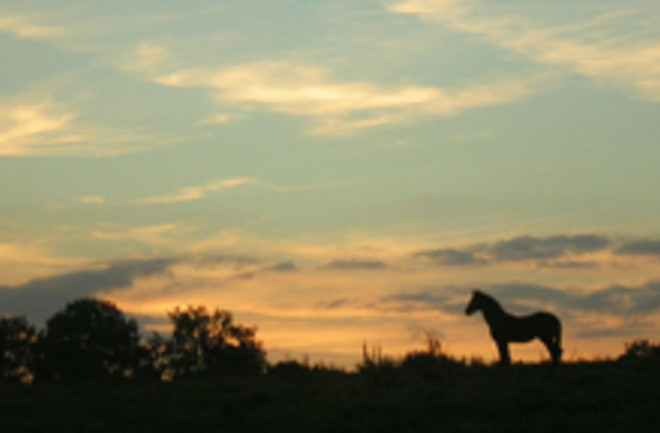 The big roundup in Nevada has begun. But rather than being fodder for a old-fashioned Western, this one is kicking up a fight. Yesterday the Bureau of Land Management launched its mission to capture 2,500 wild horses from public and private lands across the state.

Contractors in helicopters and on horseback herded some of the mustangs into corrals in the Black Rock Range, a chain of mountains 100 miles north of Reno, according to a spokeswoman for the Bureau of Land Management. Heather Emmons said she did not know how many horses were captured on the first day of the roundup, which will take two months and stretch across 1,750 square miles in the Calico Mountains Complex [Los Angeles Times]

Long-term plans call for the mustangs to be placed for adoption or sent to holding facilities in the Midwest. The agency said a facility in Reno was full of adoptable horses, making it unclear when the animals gathered in the latest capture could be put up for adoption [AP]

. To say that the helicopter roundup riled up some horse lovers would be an understatement.

euthanized. However, a federal judge last week denied a request to stop the operation by ruling that it didn't violate the law, paving the way for its commencement yesterday. Opposition remains, in both local activists and celebrity sympathizers—it seems the Rolling Stones aren't the only musicians with a soft spot in their hearts for "Wild Horses."

"To start this immense roundup ... on private land where members of the public are forbidden to attend is a brilliant, insidious move on the part of the BLM to hide the suffering and death that they are about to inflict on our mustangs," said activist Eylse Gardner [San Jose Mercury News]

. Activists say that helicopter-assisted roundups frighten the horses and can cause injuries like broken legs, which cause horses to be

Celebrities including singers Willie Nelson and Sheryl Crow and former Playboy models Shane and Sia Barbi have tried to call attention to the issue. "We must act now before the BLM has managed these magnificent animals into extinction," Nelson said [USA Today]

Why Did the Maya Abandon Their Once-Bustling Cities?