Nesophontes, The Island Murderer and Hidden Treasures of the Caribbean 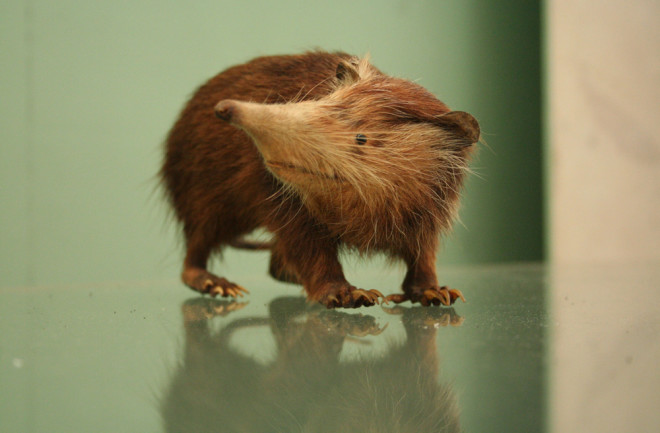 The cutest "murderer" you'll ever see: Nesophontes, an extinct genus of Caribbean mammal that was an evolutionary mystery — until now. Credit: Natural History Museum, London UK. As every pirate knows, the Caribbean is rife with buried treasure. Sometimes it's gold, sometimes it's rum and sometimes it's DNA hidden in owl regurgitations. By poking around some 750 year-old owl pellets, researchers were able to obtain enough DNA from an extinct animal — the owl's prey — to tell the whole evolutionary tale of a creature known as [cue ominous music] ... the Island Murderer. The genus Nesophontes got its name from the Greek nesos (island) and phontes (murderer or, perhaps more accurately, killer) but it's hard to imagine these little guys — sometimes inaccurately called island shrews — as stone cold killahs...unless you were an insect. For eons, members of the genus made short work of insects throughout the Caribbean and were then in turn devoured by predators such as owls. This Circle of Life was disrupted with the arrival of Europeans and, more specifically, the rats, cats and other invasive species that hitched a ride across the Atlantic with them. Beginning in the 16th century, Nesophontes numbers declined precipitiously. By the early 20th century at the latest — many researchers contend the end came much earlier — all the Nesophontes were gone.

With nothing but some bones to work off of, researchers initially placed Nesophontes close to the solenodons on the evolutionary family tree. The solenodons are also Caribbean insectivores, though they're larger (just over 2 pounds, compared to Nesophontes species which ranged from about a third of an ounce (teeny!) to about 4 ounces, or the size of a chipmunk). And, oh yeah, solenodons are also venomous (and also still around...think about that the next time you're vacationing in the Caribbean and hear something rustling in the brush behind you at night).

Solenodon cubanus is one of two living species of solenodon, which date back to the Mesozoic. This guy was photographed in 1913. Credit: New York Zoological Society. Another fun solenodon fact: In May, researchers confirmed that the venomous mammals have been around more or less unchanged for more than 70 million years. Yes, they once hobnobbed with dinosaurs. Over the past decade or so, the phylogeny winds have shifted and researchers decided solenodon and Nesophontes were different enough that they really shouldn't get an invite to the same family reunion. That left poor extinct Nesophontes out in the cold, without a branch of the family tree to call home. That is, until an enterprising group of researchers decided to pick through old owl pellets, those compacted nuggets of indigestible stuff, such as teeth and bones, that owls send back up after noshing on their prey. Mmmm. Poking around some 750 year-old pellets found in an ancient barn owl roost in the Dominican Republic back in 2007, the team discovered a number of Nesophontes remains, including a skull. And, hold the phone, folks, they were able to extract some DNA from that skull: the complete mitochondrial genome, which exists outside the cell's nucleus and is maternally inherited, plus fragments of nuclear DNA, which provides a much fuller history of an animal's evolution. Sequencing the DNA allowed the researchers to compare Nesophontes with solenodons genetically and also to determine when the species diverged.

A slightly skulkier artist rendering of an extinct Nesophontes species, commonly known as the Puerto Rican shrew. I can believe this guy was up to murder. Credit: Jennifer Garcia/Wikimedia Commons The team's results, published today in Molecular Biology and Evolution, reveal that solenodons are indeed Nesophontes' nearest known relative, but that's not saying much: the new research shows that Nesophontes diverged from the solenodon line at least 43 million years ago and perhaps as long ago as 68 million years ago. That means Nesophontes also may have been around during the Age of Dinosaurs, which didn't come to a crashing close until about 66 million years ago. In recognition of their find, the team has proposed to place both Nesophontes and solenodons in their own, new suborder, Solenodonota. The family reunion is back on.

Okay, maybe you are not feeling the Nesophontes love. Maybe you hate cute extinct mammals. Maybe you have no poetry in your soul. Whatever. At the very least, you have to appreciate that the research team was able to extract and sequence any DNA from those old owl pellets. The heat and humidity of the Caribbean is notorious for making short work of organic material and quickly degrading DNA. Sifting through the centuries of microbial contamination and coming up with enough Nesophontes material to sequence with confidence is an achievement in and of itself, and one that underscores the rapid advances we're seeing in the extraction and analysis of ancient DNA. Today it's cracking the cold case of the Island Murderer — tomorrow it could be sequencing hominin aDNA found in a different hot, humid environment, and filling in a missing link on our own family tree.