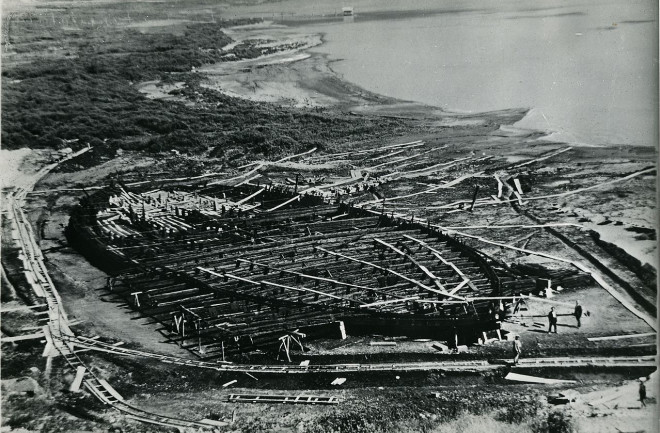 For centuries, the medieval fishermen who sailed in the placid waters of Lake Nemi, 19 miles south of Rome, knew a secret. It was said that the rotting timbers of a gigantic ancient shipwreck lurked below the water’s quiet surface. But the lake was tiny, with an area of only 0.6 square miles. And with no other body of water connected to it, what could a vessel of that size be doing there? Still, the stories about the gigantic ship persisted.

They couldn’t have known then, but at the bottom of this tiny lake were two of the most unique artifacts ever to be uncovered from the ancient world. Their story would span millennia,  bridging the eccentricities of Rome’s most notorious Emperor and one of the twentieth century’s most reviled rulers — only to be lost forever in the fires of war.

Leviathans in the Deep

Looking at the placid waters of Lake Nemi in the 15th century, none of that would have seemed plausible. But for years now, fishermen had been using grappling hooks to bring up ancient artifacts from the legendary wreck that lay beneath, and selling them in the markets. An investigation was warranted.

In 1446, a young Cardinal and nephew of the Pope named Prospero Colonna, decided to probe for himself the rumours of an unlikely shipwreck at the bottom of Lake Nemi. He sailed out onto the lake, and sure enough, he could just make out a sprawling lattice of wooden beams. He and his men tried to send down ropes with hooks on the end to retrieve parts of this mysterious structure, but at a depth of 60 feet they didn’t have much luck. All they managed was to tear off some planks. Colonna had confirmed that the wreck existed, but from there the mystery only deepened.

In 1535, Italian inventor Guglielmo de Lorena and his partner Francesco de Marchi returned to the wrecks with a new and exciting technology: a diving bell. They descended through the murk and gloom and saw an enormous wooden superstructure far vaster than anything they had imagined. The two fished around in the lake bottom for artifacts, and managed to bring up sculptures made of marble and bronze scattered on the muddy lake bottom. Many others tried to explore and survey the wrecks, but without much success. It wasn’t until Italy fell under the sway of the fascist dictator Benito Mussolini that the ships would finally be uncovered.

Mussolini was a man obsessed with the legacy of Imperial Rome, and he worked hard to include its archaeological remains in his cult of personality. Mussolini had embarked on ambitious projects around the capita:, Excavating the mausoleum of Augustus to build a Fascist piazza around it, clearing the buildings that clustered around the Theatre of Marcellus and digging up the floor of the Colosseum’s Arena to expose the hypogeum beneath and stripping it of its once verdant plant life. He was frequently described in propaganda dispatches as “a new Augustus”, evoking the Roman Emperor who rebuilt much of the city during his reign.

It was only a matter of time, then, before the dictator’s attention turned to the mysterious ships at the bottom of Lake Nemi. In 1929, Mussolini ordered something unprecedented. The whole of Lake Nemi would be drained. Engineers reactivated an ancient Roman cistern that together with a modern pump reduced the lake’s water level by 65 feet. In the mud, slowly emerging from the waters, the Italian engineers found not one, but two enormous shipwrecks. The excavations would take years, with the second ship not brought up until 1932.

The ships were vast, among the largest ever recovered from the ancient world. The largest was 240 feet in length, the same length as an Airbus A380, and measured 79 feet across. From inscriptions on lead pipes and tiles, it soon became clear that what had been discovered were the floating pleasure palaces of the infamous first century Roman Emperor Caligula.

From One Emperor to Another

Caligula was Emperor for only four years, from 37-41 CE, but his name has lived on in history due to a penchant for sadism, hedonistic excess and brutality. He demanded to be worshipped as a living God, and had the expensive tastes to match. Records show that he emptied the Imperial treasury in a single year with extravagant games and spectacles.

It seems Caligula may have built his ships on the tiny Lake Nemi due to its alignment with the goddess Diana Nemorensis, a fitting place for a living divinity to site his pleasure barges. Here, Caligula had two ships built at enormous expense. The largest, dubbed the “prima nave” (first ship) was an enormous vessel, steered with oars 36 feet long. The second was a giant floating platform replete with marble palaces, gardens, and a system of plumbing for baths. Roman historian Seutonius described the sight of the ships: “Ten banks of oars… the poops of which blazed with jewels… filled with ample baths, galleries, and saloons, and supplied with a great variety of vines and fruit trees.”

On these ships, Caligula was reported to hold parties where his wild and licentious appetites ran wild, with later historians repeating scurrilous and outlandish rumours about relationships with the wives of his generals and senators, and even with his own sisters.

Until the discovery of the Nemi pleasure barges, it was thought that the Romans were incapable of building such large vessels. Historians had assumed that measurements of up to 164 feet given for grain-carrying vessels in some ancient sources were exaggerations. The Nemi ships show they may have been real. While excavating at Lake Nemi, Italian archaeologists uncovered a veritable treasure trove of artifacts from the wrecks. Vast anchors, bronze mouldings and marble statues came up from the depths, along with ornamental oar rings and joints in copper and bronze. They found carvings and mosaics, even gilded copper roof tiles that would have shone spectacularly in the sun. The expense of the vessels would have been enormous.

The wooden beams of the ships were even coated with lead, a costly treatment designed to protect sea-going vessels from shipworms. Here this treatment was useless, since shipworms don’t live in fresh water. Despite their expense, these opulent palaces were afloat for only the briefest time. It seems they were only in use for about a year before Caligula’s four year reign came to an end. An alliance of senators and the Praetorian Guard ambushed him in a tunnel beneath Rome’s Capitoline Hill and stabbed him to death. Attempts to restore the Republic after Caligula’s death failed. The Roman military ignored the senate and reinstated Imperial monarchy. Caligula’s floating palaces, too, went the way of their creator. Their hulls pierced, the immense ships were weighted with stones  and sunk to the lake bottom.

Pride and the Fall

For Mussolini, the recovery of the ships had been a significant triumph. As the mud-soaked wrecks rose out of lake Nemi, it seemed a good metaphor for his promises to revive the legacy of ancient Rome in the modern day. He had a huge museum built in 1936 to house the wrecks, so that the public could visit. But Mussolini, like Caligula, would soon face a fitting downfall. And the Nemi ships would follow him into the ashes of history.

Mussolini at the dedication of the museum housing the Nemi ships, 1940. (Credit: Wikimedia Commons)

Mussolini at the dedication of the museum housing the Nemi ships, 1940. (Credit: Wikimedia Commons)

On the night of May 31 1944, less than four years since Mussolini entered the Second World War in support of Hitler’s Germany, Italy was on the brink of defeat. The country had nearly capitulated, and had been invaded by the Nazis to prevent their resistance from collapsing. But the Germans were on a multi-front retreat across all of Europe. Allied troops were closing in.

It’s not known whether the fires started as a result of US artillery or German arson. Nazi troops frequently set fire to positions they abandoned, blowing up bridges on the retreat and doing anything they could to slow the advance of the Allies. Either way, the Nemi ships burned. Only some bronzes survived, along with a handful of photographs of the colossal wrecks. Like Caligula, Mussolini met an ignoble end. Less than a year after the ships burned, he was shot while fleeing Italy in disguise. Two days later, Hitler followed by shooting himself.

Today, the ghosts of the Nemi ships live only in their photographs, and the few remaining artifacts that survived the fire. They form a haunting parable for those who would use the remains of the past for their own ends, while taking no heed of their warnings.