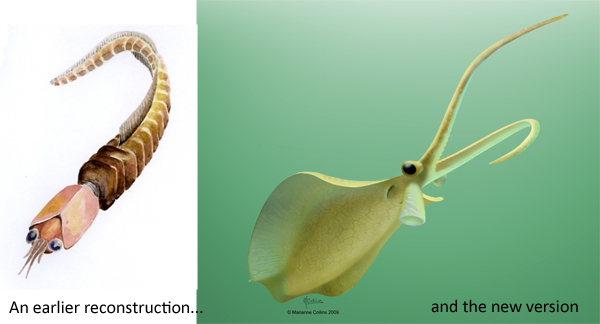 In the Canadian Rockies, a horde of 91 squid-like animals have risen from the depths, millions years after their demise. This isn't the plot of a terrible B-movie; it's the doing of Martin Smith and Jean-Bernard Caron from the University of Toronto. Together, they have solved a mystery some 500 million years in the making. Smith and Caron have been giving a makeover to an enigmatic creature called Nectocaris. Until recently, only one specimen had ever been found. Its poor state and puzzling combination of features made it nigh impossible to classify. But not anymore – by finding a staggering 91 extra specimens, Smith and Caron have revealed that Nectocaris is the earliest known cephalopod. It’s the great-great-great-(etc)-granduncle of today’s octopuses, squids and cuttlefish. Nectocaris pteryxor “swimming crab with wings” was first described by Simon Conway Morris in 1976. It's one of the stars of Canada's Burgess Shale formation, arguably the planet’s most important collection of fossils. Its rocks preserve an extraordinary diversity of animals from the Cambrian period, some 505 million years ago. It was a time of great evolutionary experimentation, when the ancestors of all of today’s animal groups mingled with bizarre creatures that have left no living descendants. Until now, Nectocaris’s allegiances have shifted all over the place. Conway Morris himself had no idea where to place it. Some scientists suggested that it was an early arthropod, a relative of crabs, shrimp and the like. Others placed it within the chordates, the group that includes us and all other back-boned animals. But Smith and Caron think that both of these possibilities are unlikely. Their new specimens reveal a host of features that are distinctly cephalopod-like.

Around four centimetres in length, Nectocaris had a soft, flattened, kite-shaped body with two fins running down its sides. Its small head was adorned with two long tentacles and two stalked eyes. Unlike the compound eyes that were common among Cambrian animals, probably had the camera-like structure that modern cephalopods use. From its neck protruded a flexible funnel, which opened into an internal cavity containing pairs of gills. The funnel lay behind some of the earlier confusion about Nectocaris. In the original specimen, it was flattened so that it looked like a shield-like plate behind the eyes, reminscent of a crustacean's body armour. The new specimens put paid to that interpretation. The structure is clearly a funnel, similar to those used by modern cephalopods. Nectocaris probably used it to swim the same way, giving it an extra boost of jet propulsion to complement the beating of its large fins. It was either a predator or a scavenger, grabbing small, soft-bodied animals with its long tentacles. And it probably spent most of its time close to the seabed; some specimens had sediment-filled gill chambers, suggesting that they were caught by a sudden fatal mudslide. The sediment helped to preserve their bodies with such quality that 500 million years later, their position in the animal tree of life has suddenly become clearer. Nectocaris’s new status pushes back the rise of the cephalopods by 30 million years, telling us that this popular group arose far earlier in earth’s history than previously thought. Smith and Caron think that two other Burgess Shale oddities - Vetustovermis and Petalilium were also members of the same family. The revised family tree also repaints our picture of the group's origins. Until now, scientists had thought that the group’s first representatives – the nautiloids – evolved from a group of creeping snail-like creatures called monoplacophorans, whose backs were covered with cap-like shells. These casings were gradually modified so that the animals could float. The living nautiluses and the extinct (but frequently fossilised) ammonites belong to the same shell-bearing group. But Nectocaris had no shell despite being the earliest known cephalopod and an active swimmer. If Smith and Caron's interpretation is right, the cephalopods didn't inherit hard coverings from a monoplacophoran ancestor. These shells were a later innovation all their own. There are a few parts to the puzzle that haven't been fitted yet. For example, did the cephalopods start off with two tentacles as in Nectocaris only to evolve more over time, or were Nectocaris’s arms formed by fusing multiple pairs? Also, all modern cephalopods have a sharp, horny beak and a nightmarish, rasping tongue called the radula; it’s unclear if Nectocaris shared these features, for its mouthparts have never been well preserved. The radula is a particularly big deal - it's a uniting feature of all molluscs (the group that includes cephalopods, monoplacophorans, snails and others), including some that are supposedly more primitive than Nectocaris. Finding a radula would be the clincher for Smith and Caron's argument; failing to do so puts their analysis in a tricky position. Reference: Nature http://dx.doi.org/10.1038/nature09068Images: reconstruction by Marianne Collins; fossil photo by Jean-Bernard Caron More on cephalopods: