Neanderthals had bigger skulls than modern humans do, but that doesn't mean they'd beat us at chess. 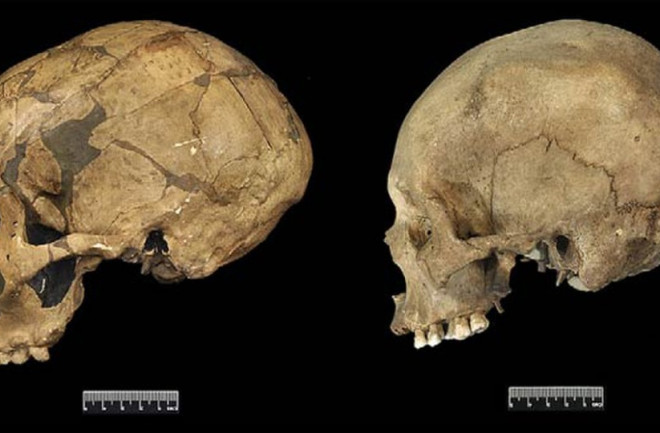 In any textbook on human evolution, you’ll find that fact, often accompanied by measurements of endocranial volume, the space inside a skull. On average, this value is about 1410 cm3 (~6 cups) for Neanderthals and 1350 cm3 (5.7 cups) for recent humans.

So does that quarter-cup of brain matter, matter? Were Neanderthals smarter than our kind?

While brain size is important, cognitive abilities are influenced by numerous factors including body size, neuron density and how particular brain regions are enlarged and connected. Some of these variables are unknowable for Neanderthals, as we only have their cranial bones and not their brains. But anthropologists have made the most of these hollow skulls, to learn what they can about the Neanderthal mind.

The question of Neanderthal intelligence has fascinated scientists since 1856, when the first fossils classified as Homo neanderthalensis were discovered. From the start, they got a bad reputation. In an early study of the skull, “The Reputed Fossil Man of the Neanderthal,” geologist William King speculated the Neanderthal’s “thoughts and desires … never soared beyond those of the brute.” The view persists today from GEICO ads to the Oxford English Dictionary.

But is there basis for this stereotype? After all, Neanderthals were our evolutionary cousins, sharing about 99.8 percent of our genetic code, including genes important for brain expansion and language. They were similar enough, in terms of biology and behavior, that Homo sapiens and Neanderthals interbred, in several periods and places between 40,000 and 100,000 years ago.

Since diverging from a common ancestor over 500,000 years ago, Neanderthals and modern humans evolved distinctive anatomies (Credit: Encyclopedia Britannica/UIG via Getty Image)

At the same time, Neanderthals were distinct enough to be classified as a separate species. Sometime between 520,000 and 630,000 years ago, the shared ancestors of Neanderthals and Homo sapiens diverged and embarked on separate evolutionary paths. Members of that population that spread to Europe eventually evolved into Neanderthals, whereas those in Africa gave rise to Homo sapiens or modern humans. During this period of separation, the groups evolved distinctive anatomies. Modern humans were relatively tall and lean. Neanderthals became short and massive, with average males about 5 foot 4 inches, 170 pounds and females 5 foot 1 inch, 145 pounds, based on estimates from femur and pelvis size.

Since their common ancestor, the lineages also increased in brain size, but in different ways. To accommodate bigger brains, Neanderthal crania expanded lengthwise like footballs, whereas modern human skulls became more globular, like soccer balls. By 150,000 years ago, members of both species had brains surpassing 1400 cm3 — about three times larger than chimpanzees, our closest living relatives.

How Much Can that Skull Hold

To measure fossil brain volume, anthropologists have traditionally filled skulls with beads or seeds, and dumped the contents into a graduated cylinder (a precise measuring cup). They’ve also submerged molds of skulls into water, measuring the volume displaced. Today CT (computed tomography) scanning methods offer more accurate (and less-messy) measurements, but much of the data in textbooks and other references was collected the old fashioned way.

Based on these values, we can confidently say fossil Neanderthals and modern humans from the same time period had similar brain sizes. Twenty-three Neanderthal skulls, dating between 40,000 and 130,000 years ago, had endocranial volumes between 1172 to 1740 cm3. A sample of 60 Stone Age Homo sapiens ranged from 1090 to 1775 cm3.

For recent humans, average adult brain size is 1,349 cm3 based on measurements from 122 global populations compiled in the 1980s. Excluding extreme conditions like microcephaly, people span from 900 to 2,100 cm3. That means the average Neanderthal brain volume, of roughly 1410 cm3, is higher than the mean value for humans today. But all the Neanderthals that we’ve measured fall comfortably within the range of living people.

So we know Neanderthals had similar-sized, if not bigger, brains. But their brains could have been organized or proportioned differently, resulting in important cognitive differences. Because Neanderthals had more massive bodies, they may have needed more brain volume for basic somatic maintenance — leaving less brain matter for other functions.

Some scientists also suggest that Neanderthals had relatively better vision. In a 2013 study, researchers estimated visual cortex volume based on the size of orbits, or the holes in skulls for eyes. Neanderthals had bigger orbits, implying larger visual cortices and better vision, which may have been an adaptation for higher latitudes, with less light (although it’s questionable whether orbital size is a reliable indicator of visual cortex volume in humans).

And what did Homo sapiens do with our extra brain space? Some researchers have argued modern humans had larger cerebellums, making us better at information processing. Others have suggested we prioritized smell: Modern human brains had relatively large olfaction regions according to a 2011 study in Nature Communications, which compared the internal base of skulls. The authors propose that heightened sense of smell would have been beneficial for subconsciously identifying safe foods or detecting social information (like who is kin, angry or a suitable mate).

I know you’re thinking, “I’d take vision over smell any day.” That’s my reaction too. What matters here is this: We don’t know if this difference played any role in the success of modern humans and the extinction of Neanderthals. But identifying any such differences — in brains, bodies or culture — gives us a starting point for understanding what gave our species an evolutionary edge.