What makes them look like that, investigating the age-old theory of snowflake singularity, and more 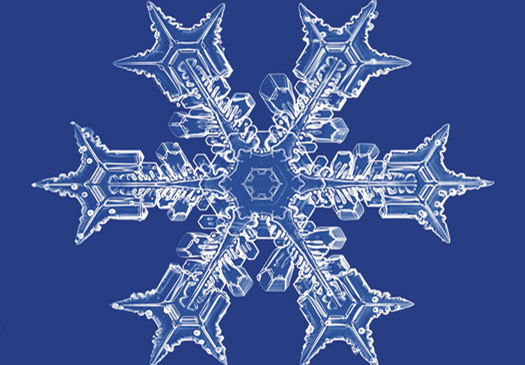 When physicist Kenneth Libbrecht looks out over a snowy landscape, he doesn't see a peaceful scene, he sees a laboratory. Libbrecht has traveled from Fairbanks, Alaska, to a research station above the Arctic Circle in northern Sweden to study the formation of snow crystals. His microscopic photos on display in his latest book, Snowflakes from Voyageur Press, show the intricate variety of snow crystals, and reveal the rigorous laws of nature that shape them.

Libbrecht is interested in what happens on a molecular level when ice crystals form, but he sees it as an old-fashioned scientific pursuit: "It's really like doing science 100 years ago," he says, in that he's studying a mystery inherent in the mundane and familiar snowflakes that flutter from the sky each winter. 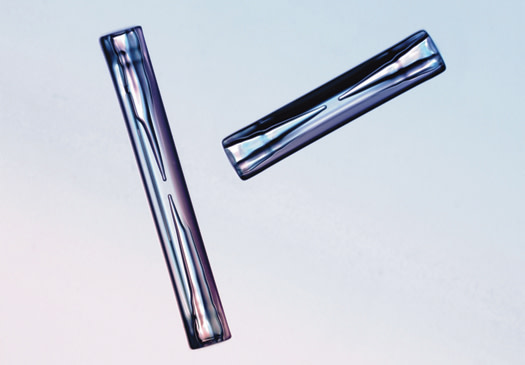 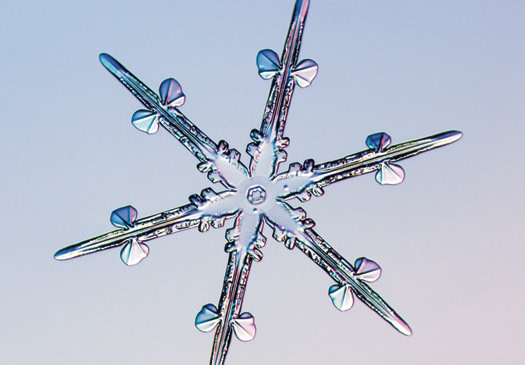 Chinese naturalists may have discovered the six-sided nature of snowflakes over a thousand years before Europeans caught on; an ancient text dating from 135 B.C. mentions the six-pointed nature of "snow flowers."

In 1611, German astronomer Johannes Kepler caught up with a treatise on the six-fold symmetry of snowflakes, but he was baffled as to how the intricate shapes were created. Libbrecht explains that it wasn't until the development of X-ray crystallography in the 1920s that researchers were able to study the atomic structure of ice crystals to determine how they formed. "X-rays have about the same wavelengths as the spacing between atoms in crystals," Libbrecht explains. 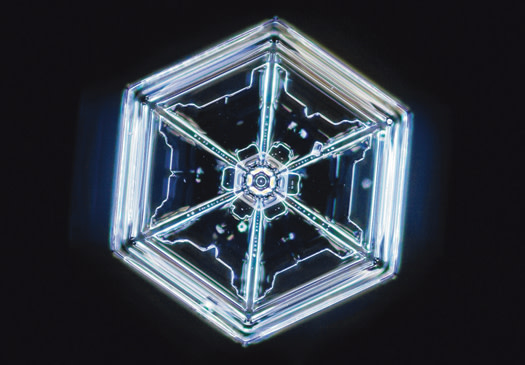 Each snow crystal forms when water vapor in the clouds condenses into ice. The molecules of H2O join together in a hexagonal lattice, and those molecules begin to clump together. The small core of a crystal has "rough" patches with many dangling chemical bonds as well as "smooth" areas; a crystal grows into a six-sided prism because the incoming molecules attach to the rough patches at six distinct spots. Those areas grow faster than the "smooth" patches, and soon a basic hexagonal shape with six points and six facets has formed. 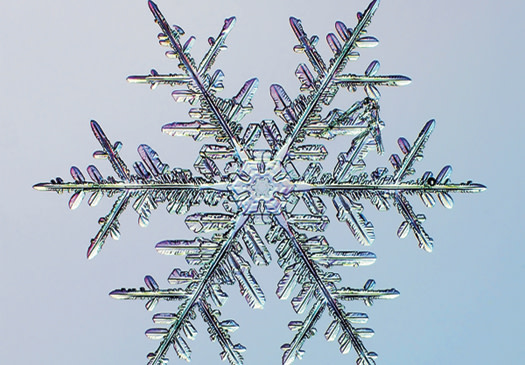 Snowflakes grow from a basic prism to elaborate, lacy forms because the six corners continue to grow faster than the rest of structure. In a phenomenon called branching instability, water molecules diffuse through the air to reach the growing crystal, and reach the projecting corners first.

They build six branches, and projections on those branches soon sprout side-branches. The resulting crystal is called a stellar dendrite. The branching part of a nerve cell is also called a dendrite, which comes from the Greek word for "tree."

(Technically speaking, a snowflake is a conglomeration of crystals, which is how most snow falls to the ground. But the term is often used synonymously with "snow crystal.") 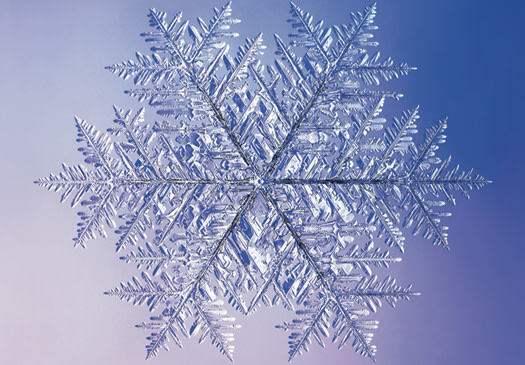 This is the largest single snow crystal Libbrecht has ever photographed: From tip to tip, it was about the size of a dime. 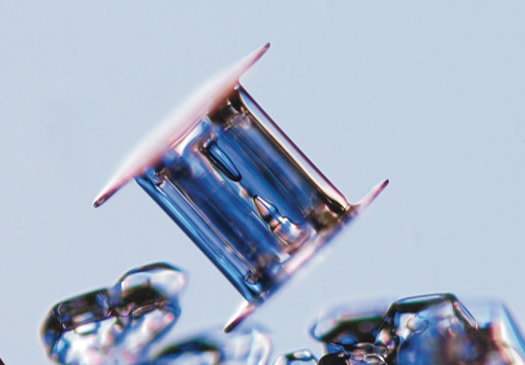 As the growing snow crystal is tossed by the air currents within a cloud, it encounters areas with different atmospheric conditions. Even subtle shifts in air pressure, temperature, and humidity can cause a radical shift in the crystal's growth pattern.

To make a spool-shaped flake, a crystal begins to form into a hexagonal pillar in a region that's about 20 degrees Fahrenheit before it drifts into another zone and "has a crystal midlife crisis," Libbrecht says. If the temperature gets either a little warmer or cooler the crystal growth shifts and it begins to form flat plates on the top and bottom of the pillar. 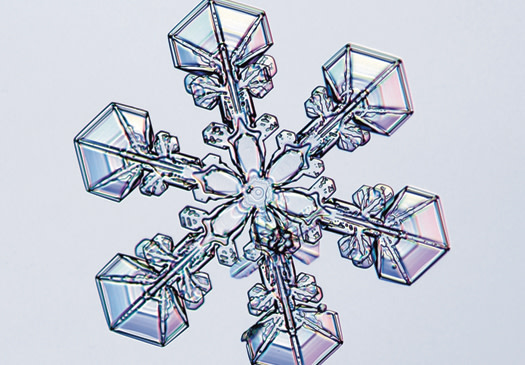 Libbrecht still does his fair share of work on massive-scale science: He also works on the LIGO project, in which a few hundred scientists are studying gravitational-wave signals from supernovae and black holes.

Studying snow crystals allows him to zoom in from macro to microphysics. "I like the scale of it," Libbrecht says. "Everyone in science seems to be working on these huge things--they're going to some other planet or building a $6 billion accelerator." Libbrecht says he likes that he can work on his snow crystals quietly and cheaply, and can make advances in the field using the simple instruments he has in his lab. 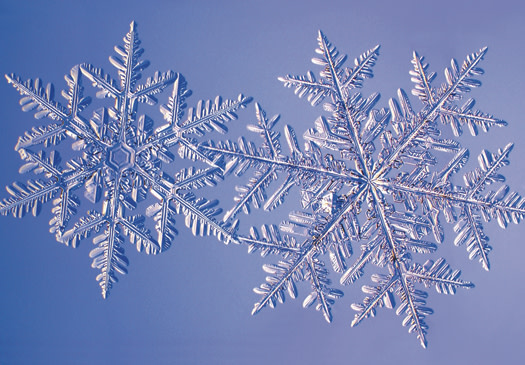 As you might expect, Libbrecht hears the question only too often. But the answer is not so simple: It depends on what you mean by the word alike, Libbrecht says. It's essentially impossible that any two visible ice crystals would have exactly the same molecular structure, but small, simple, hexagonal prism crystals might look alike to the naked eye.

But large, complex snowflakes are a different story. With the staggering number of variables that affect each step of crystal growth, Libbrecht says he's willing to back the conventional wisdom. Out of all the complex snow crystals ever made over the history of the planet, it's unlikely that any two ever looked completely alike, he says. 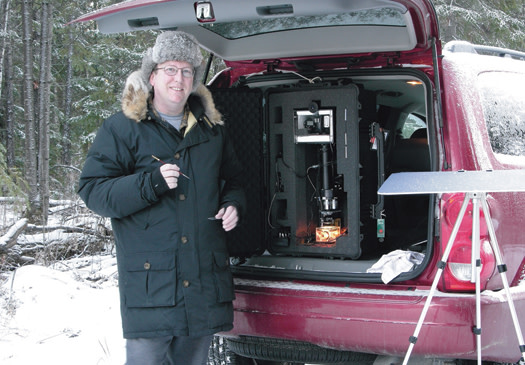 For people who want to know more about snow crystals, Libbrecht has simple advice: Get yourself to a snowy place and look up. Libbrecht takes his photos with a homemade microscopic camera, but he says that even a simple $2 magnifying glass will reveal wonders.

"An awful lot of the crystals look like sand, like little lumps, but you can tell the big symmetrical ones. It's a real hoot," he says. "You never know what you're going to find."