Ecologists are finding animals and plants that defy aging. 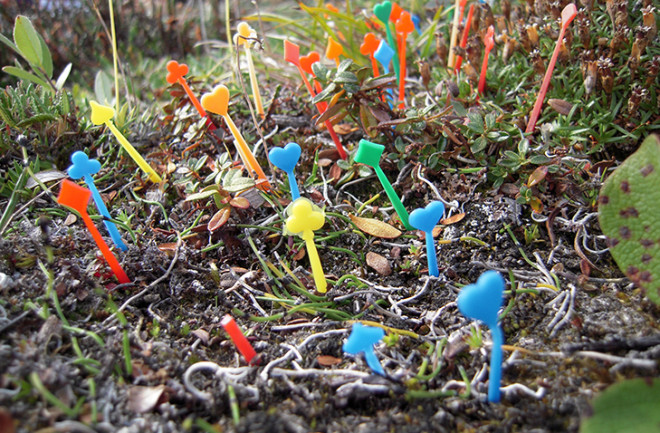 A dozen years ago, Daniel Doak began crawling around the Alaskan tundra carrying a container of colorful party toothpicks. He was there on the chilly North Slope at the top of the continent to study moss campion, a low, flat plant that explodes with pink flowers in early summer.

Moss campion seedlings are “the size of the head of a pushpin,” Doak says, and 20 years can pass before they grow much bigger. Nonetheless, Doak, an ecologist at the University of Colorado, dutifully identified, mapped and measured the plants, using the toothpicks to mark the location of the smallest ones.

Every summer he returns, and after all those years of strained eyes and bruised knees, he now has data on 2,500 plants in the Arctic and thousands more at sites across the globe, from the Rocky Mountains to the Pyrenees. (Moss campion grows across a wide swath of the world’s high latitudes and elevations.) That information led Doak and his collaborator, Duke University ecologist William Morris, to a surprising find: The plants live for centuries. And that insight is helping to shape an emerging field: the science of how nature ages.

Initially, Doak simply wanted to understand how organisms respond to harsh environmental conditions, such as the frigid temperatures of an Alaskan winter. “How does a species make a living,” he wondered, “in a place where it’s tough to get established and tough to live?” So Doak and Morris recorded basic demographic data, measuring things like how fast the plants grow — and how long they live. “We do the equivalent of what the Census Bureau does,” says Doak. “We ask, ‘Are you alive? How big are you? How many children do you have?’ ”

By tracking the plants year after year, Doak has shown that moss campion follows a biological strategy known as negative senescence. Senescence is the scientific term for what we commonly think of as aging. All aging really signifies is time lived. To us, there’s no separating the passage of time from the process of decline. We see it in ourselves: gray hair, bad knees, flagging energy. But in negative senescence, the risk of death decreases as an organism grows older.

For years, biologists believed this strategy was largely impossible. Everything that survives for long enough, they thought, will eventually enter a deteriorating slide toward death. A combination of long-term data sets and new computational tools is painting a different picture: plants and animals that stay healthy, and even reproduce, for far longer than anyone would have predicted. Death may still be their ultimate fate, but it doesn’t represent the end point of decline. It arrives via catastrophe, or a whim of nature, or as a result of human-caused changes to the environment.

Doak and other scientists examining how various species age have discovered that in some cases, they simply don’t. Evolution may sometimes favor organisms that follow a different path. “Clearly there are ways for natural selection to dramatically change how senescence happens,” Doak says. “It doesn’t seem that hard to defeat senescence.”

Questions of Life and Death

Doak’s conclusion would have seemed heretical just a few years ago.

Why living things age is one of biology’s most vexing questions. For the past several decades, biologists have clung to a trio of theories, all of which hold that senescence is inescapable. One theory holds that organisms age because of built-up genetic mutations that aren’t weeded out by natural selection — a disease, say, that hits after your reproductive prime. Another maintains that aging occurs because some traits that make you better at reproducing may also cue your demise. And according to a third theory, as organisms age they deteriorate and must spend more energy to repair cell damage — to the detriment of other essential physical functions.

For years scientists have quibbled over which theory proved the best, but few doubted that, among the three, they explained the evolution of aging.

Now a new branch of the science of aging has sprouted, from a part of the world that, oddly, was excluded before: nature. And its early results suggest that those long-standing theories only tell part of the story. Until as recently as a decade ago, the mostly lab-based scientists who studied aging assumed that senescence wasn’t visible in nature. You wouldn’t see it in the wild, they believed, because the cruel realities of nature simply don’t allow anything to live long enough to decline. But years of data from long-term studies by Doak and other scientists examining plants, birds, mammals and fungi in the field are showing the flaws in these assumptions.

“There’s dogma in the literature — which is more oriented toward the cell biology of aging — that wild animals don’t actually senesce,” says Daniel Nussey, an evolutionary ecologist at the University of Edinburgh who studies aging in Soay sheep on a remote Scottish island. “That is absolutely wrong. This process can be seen, and it is shaped by evolution.”

In fact, signs of nature aging are all around us. Nussey’s wild sheep shed several pounds the year before they die; alpine ibex older than 8 or 9 can’t tolerate harsh weather; some plants lose their ability to survive drought. Elderly albatross seek out food in different areas than they did in their youth. Why organisms age differently — the comparative biology of aging — is a growing fascination for scientists. “We’re trying to understand what it is that drives variation in this process,” Nussey says.

That variation, it turns out, includes species that simply don’t follow the established rules. Back in 2004, a team of scientists looked at the emerging evidence from ecology and proposed that aging isn’t inevitable at all. In a controversial paper published in the journal Theoretical Population Biology, they wrote that “some, and perhaps many, species show negative senescence” — a situation in which death rates actually fall as the years pass.

Bristlecone pines, like this one in California's White Mountains, can live for thousands of years. | Neil Lucas/Nature Picture Library

Since then, evidence of negative senescence has been stacking up.

In the case of moss campion, the plant has evolved a strategy of slow, deliberate growth. Doak believes it spends much of its early energy building an extremely long tap root that helps ensure water and nutrients later on, but slows the plant’s above-ground growth in the meantime. In the moss campion’s tundra home, “it’s very hard to get established,” says Doak. But once it is, its chances of surviving and eventually reproducing are high. There’s not much that will kill moss campion. The plant is so flat and low to the ground, and its leaves so tiny (less than half an inch long), that caribou and Dall sheep have a hard time eating it.

To Doak, it makes sense that natural selection would, in this case, act against aging. “Random catastrophes aren’t going to kill you, and it’s worth your while to put your investment in yourself rather than just in putting out offspring,” he says. Rather than “live fast, die young,” the campion strategy is more “live slow, die old.” Really, really old.

With some organisms, really old can mean millennia. High in the White Mountains near the California-Nevada border live some of the oldest trees in the world. Their trunks thick and gnarled, their oldest needles, born when JFK was president, still hanging on, these bristlecone pines are nearly 5,000 years old. Living five millennia is quite a feat, but what’s even more surprising is that these trees show no sign of decline. They are more likely to survive environmental stress than their younger cohorts, and they continue to reproduce at a steady rate. Their measured growth allows them to build extra-durable wood that resists rot, drought and lightning. In other words, in this case, natural selection appears to favor avoiding senescence entirely.

But plants are hardly the only organisms defying the aging process. Studies of turtles and lizards have also turned up negative senescence. One long-term study of three-toed box turtles in Missouri found that the animals were still reproducing well into their 70s.

In the mammal world, naked mole rats are the longest-living rodents. They can reach nearly 30 years of age in captivity. Scientists have found that breeding females “show no decline in fertility even well into their third decade of life,” according to a 2008 study published in the Journal of Comparative Physiology B. That makes sense, says Doak: “They live underground, in a resource-poor environment. They live cooperatively, meaning that your only chance to reproduce is after you’ve lived for a while and moved up the social strata.” Natural selection in this scenario favors individuals that live longer.

Doak’s moss campion research has lately turned up more than just evidence for negative senescence. He’s also found signs that global warming may be exerting a tangible influence on death’s odds. Close monitoring of the Alaskan moss campion plants over the years reveals that what’s most likely to kill the plants today is climate. “In winters when it’s quite cold but there are warm periods, the plants lose the blanket of snow that covers them,” Doak explains. They come down with the equivalent of freezer burn; ultimately, they die from being freeze-dried. “We’ve been seeing more and more of that over the course of our study,” he says.

While global warming represents a hurdle for the plants, Doak himself faces a more existential challenge. “It’s very difficult,” he admits, “to show that senescence doesn’t ever occur.” To prove conclusively that something doesn’t age would itself require human immortality. And, unfortunately, negative senescence in humans remains elusive.

[This article originally appeared in print as "Forever Young."]