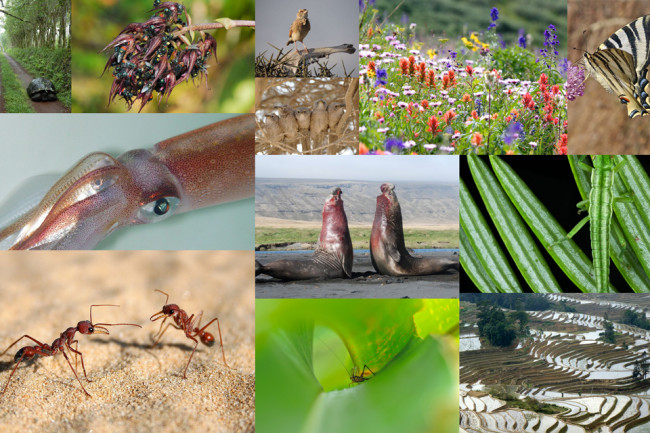 Where a photographic eye might see natural beauty, an ecologist tends to see a complex network of organisms interacting with each other and their environment. As such, the open-access journal BMC Ecology decided to host a competition that sees the world from an ecological perspective. Two hundred entries poured in from professional ecologists around the world. Below, and on the following slides, is an abridged version of the paper published with the winning entries (and runners up).

“The camera industry is one of the few innocuous parasites in wild nature.” –Aldo Leopold, A Sand County Almanac 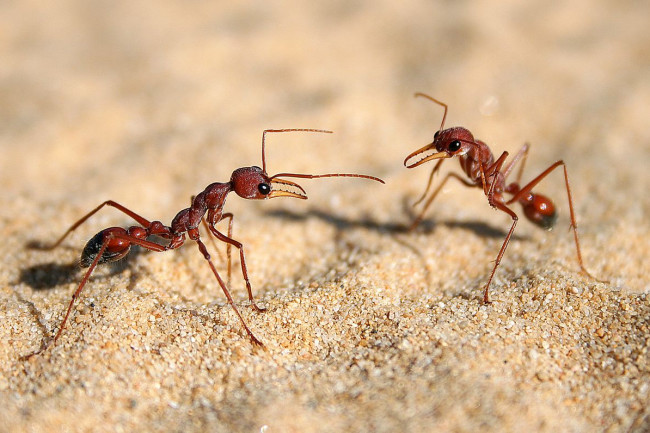 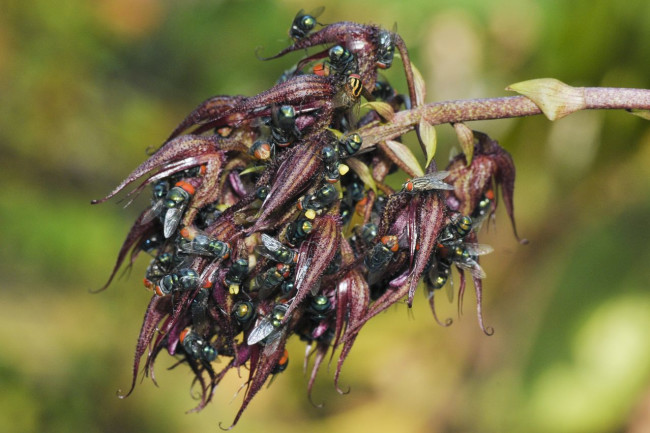 “It’s a stinky feast! Blowflies just can’t resist the attraction of the orchid Bulbophyllum lasianthum: Captured during an orchid pollination observation in Kajang, Selangor, Malaysia, this photograph shows the orchid flowers of Bulbophyllum lasianthum Lindl surrounded by flies. During anthesis, these attractive purplish-red flowers emit a strong foul odour similar to that of carrion.

"The predominant species of flies found visiting and pollinating B. lasianthum was Chrysomyia megacephala Fabricius (Calliphoridae: Diptera), commonly known as blowflies. Both male and female blowflies are capable of pollinating the flowers of B. lasianthum. Some of the flies shown here actually have pollinia stuck on their backs as they happily work the flowers! Various fly species are extremely attracted to the flowers due to the stench as well as the carrion appearance of the flowers.” 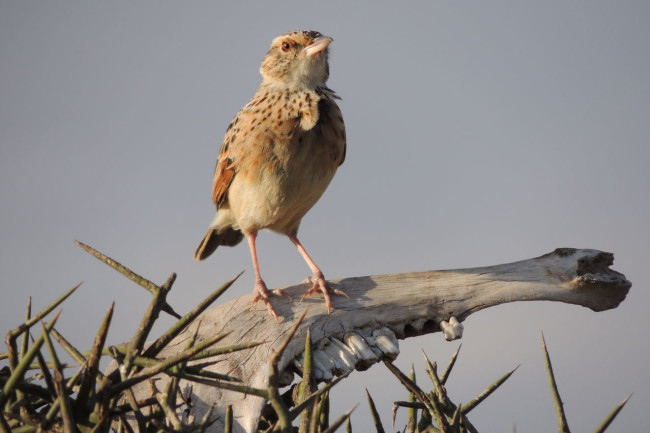 “I think that this photo shows one of the most important issue[s] in nature conservation nowadays... Because of habitat loss a lot of species are facing big troubles to survive. So, people are trying to create reserves and refugees for animals. But the encroachment due to sprawling of cities highlights the problem of save either one or another species, because in a restricted area often it is not possible to conserve all the species occurring inside. My photo is a way to underline this compromise.” 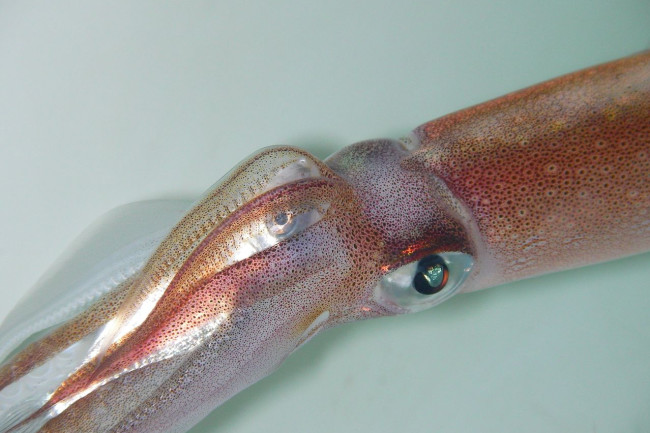 “With a refined and tenacious tactic of predation, the European squid (Loligo vulgaris) has captured a bream (Sparus aurata) launching its tentacles and applying a lethal bite in the prey column. The image captures the moment when the squid seizes the prey with his arms.” 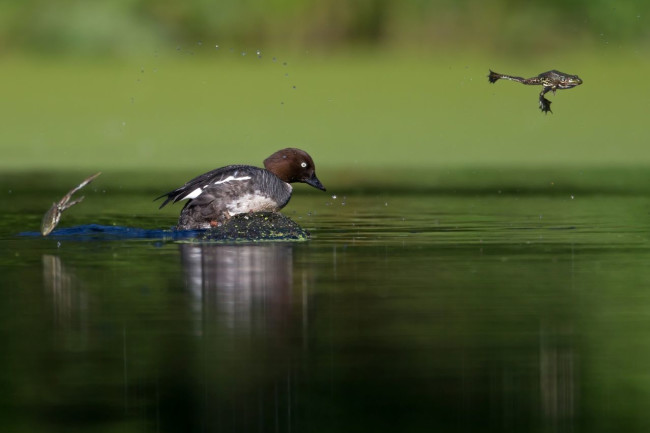 “The two frogs [were] enjoying the sun on the branch when the duck jumped up on the branch. The frogs jumped for their lives!” 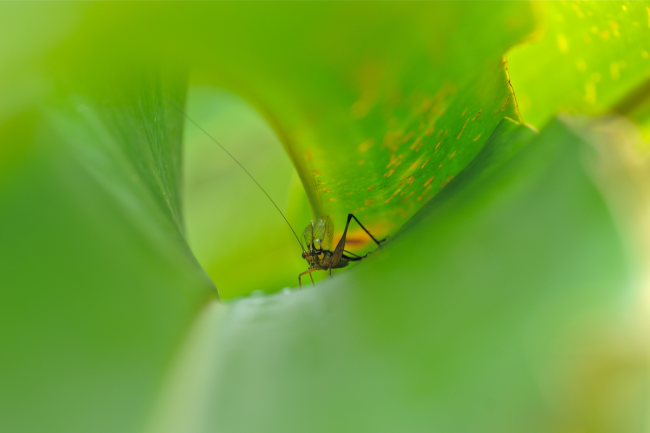 “This cricket was singing at dusk at the edge of secondary forest in Borneo. He had crawled into the natural funnel of a ginger plant which was being used to amplify the sound of the song. I really liked the composition and decided I had to take it in natural light. This meant opening the aperture right up and slowing the shutter to 1/60. The effect was just what I wanted—a cricket with slightly blurred wings, capturing the movement, in a sea of blurred green with a strong sense of the funnel-nature of the plant. There are lots of pictures of singing crickets, but I know of none that capture this kind of behavior—which is well-known.” 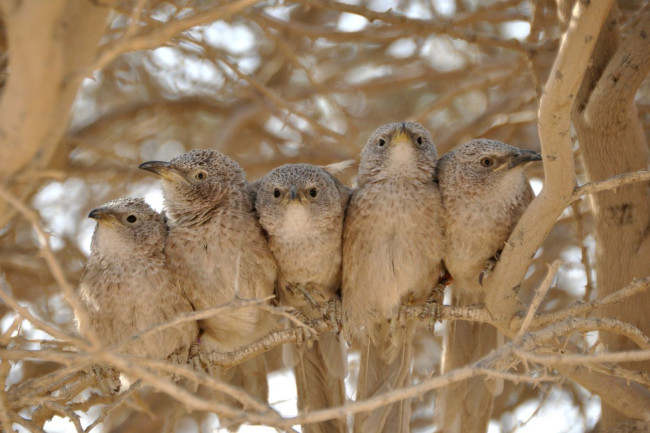 “Arabian babbler (Turdoides squamiceps) group allopreening in front of a neighboring group during a border confrontation.” 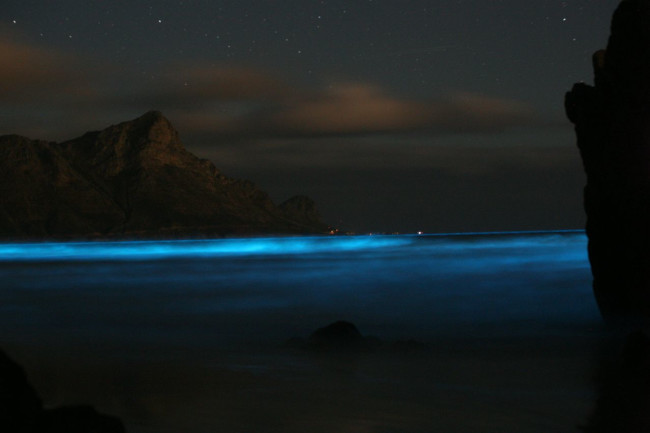 “Seasonal winds can cause the upwelling of nutrients which in turn can cause plankton populations to bloom as 'red tides.' Here, a dinoflagellate population (Noctiluca sp.) turns the ocean a luminous blue color as the disturbance by the wind triggers a light-generating chemical reaction. The production of light is thought to attract fish predators that prey on potential predators of the dinoflagellates.” 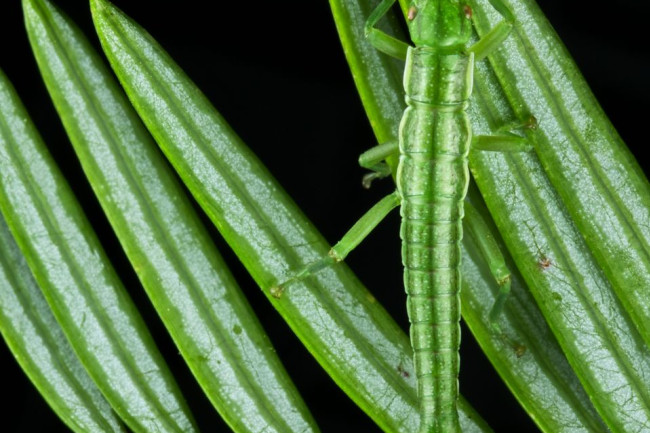 “A major factor in choosing this image as the winner is that it manages a seemly impossible task: to visualise an immensely long-term ecological process in a single static shot.

A moment’s thought reveals that the evolution of this camouflage may not be simple, because this sequioa is the insect’s host plant. While the insect benefits from its camouflage, the tree (presumably) suffers increased herbivory. This is ecological coevolution along the lines of Batesian mimicry." "As a runner-up, we have selected a dazzling scene from Colorado of a subalpine flower meadow. Composing a photograph of this nature is surprisingly difficult, and Benjamin Blonder, a PhD student from University of Arizona, deserves congratulation for such a captivating portrayal of what it means to be biodiverse.

The emphasis here is not on survival, but on reproduction: the dull but functional photosynthetic green seems an almost insignificant background compared to the waving of riotously coloured floral genitalia. Although it can be seen as a poster child for the beauty of our science, it is only when we force ourselves to view the picture through an ecologist's eye that the true depths are revealed. What is it that allows such a diversity of forms and colours to coexist in an otherwise similar patch of ground?" 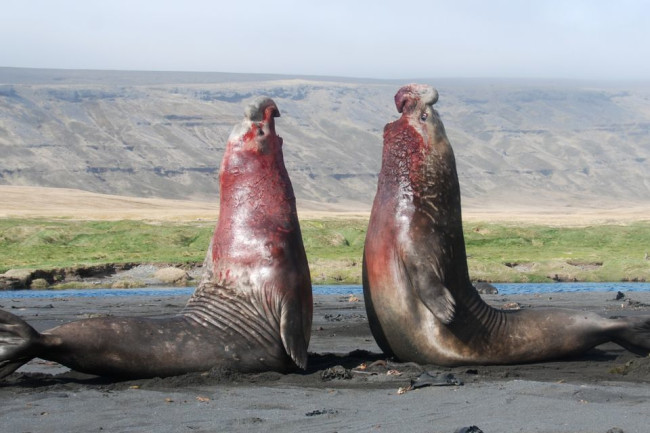 This photograph was taken while the two male Southern Elephant Seals (Mirounga leonina) were fighting over a harem of 127 females.

The photo is "a terrifically vibrant shot of two giant scarred, bloody, Southern Elephant Seal males fighting for access to females," says editor Nick Royle. "You can almost hear the roars of the combatants, and smell the blood, so well has this image captured the behavior.

"I love the mirrored symmetry of the males as they engage in their violently ritualized, almost choreographed, fighting; the male on the right of the shot fixing his rival with a gimlet eye as he looks to land a decisive blow. The picture is very well composed, with the gore-covered males with their red bibs contrasting sharply with the serenely bleak but beautiful backdrop. A nice final touch is the skua in the bottom right of the frame, seemingly taking a keen interest in the outcome. Or perhaps (s)he is the referee?" 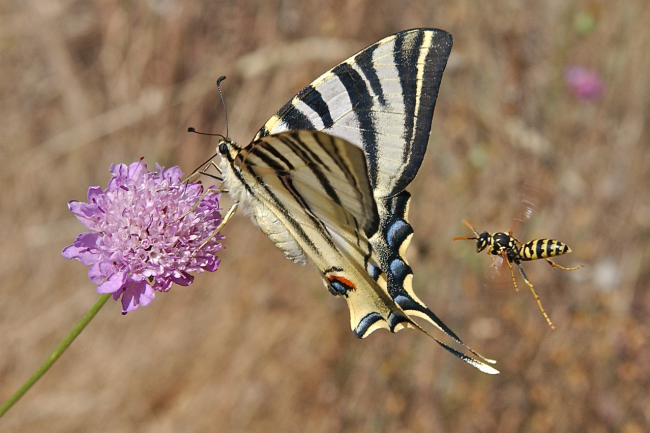 Says the photographer, professor Michael Siva-Jothy from the University of Sheffield:

"I was taking pictures of scarce swallowtails on Scabius flowers when I heard a Polistine wasp buzzing around. It was hovering behind the butterflies and then darting in and body-checking them. Although I didn't witness predation I later saw a wasp dismembering a skipper in the same area. I’m pretty sure this wasp was trying to predate the swallowtail. I like the picture because it was difficult to take—the wasp was moving very fast and the focal plane was very shallow—and because it captures three trophic levels in one.” 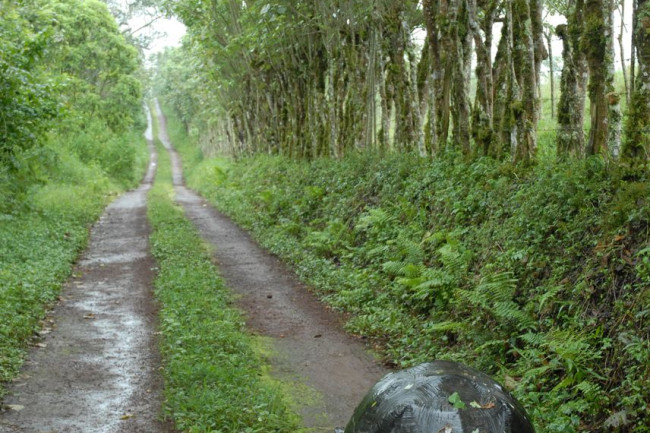 “The Galápagos islands are something of a modern conservation symbol, due to the profound influence they had on the life and work of Charles Darwin. During his travels on the Beagle, Darwin noticed subtle anatomical differences between giant tortoises living on different islands in the archipelago, which would later inform his theory of evolution by natural selection.

This image by Hara Woltz, a conservation biologist from Columbia University (US), was taken while researching ecological interactions between species and landscapes in the archipelago, and depicts a Galápagos tortoise (Chelonoidis nigra) on Santa Cruz Island utilizing a human road.

Section Editor Josef Settele found a subtle commentary behind the picture... “It shows nicely that a knowingly long-lived specimen of a low-density species does not necessarily seems to have a bright future, even though a rather large path is offered.” 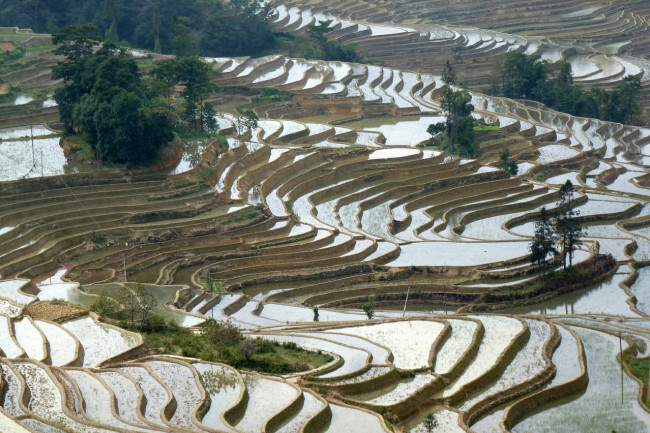 Research plant pathologist Yulin Jia from U.S. Department of Agriculture Dale Bumpers National Rice Research Center took this image. He explains how rice paddies have been cultivated for more than 1000 years in this region:

“Expansive areas of these terraced fields support enough rice for hundreds of thousands of people. Water is saved in the hilltop forests, and channeled down to the terraces for irrigation. The rice terraces are flooded from September to March, [and] the evaporation from these paddies provides a cool and pleasant climate for local residents while the fields provide a spectacular view for travelers.” "The section on theoretical models was always going to be one of the most challenging to depict visually, especially when judged alongside photographs of the natural world. It also presented perhaps the greatest opportunity for creativity.

The winning entry chosen by Section Editor Michael Bonsall was submitted by Chaitanya Gokhale, a postdoctoral researcher at Max Planck Institute for Evolutionary Biology (Germany), and depicts a model of evolutionary game theory on the maintenance of biodiversity with multiple players. This figure is taken from their 2010 article in Proceedings of the National Academy of Sciences entitled "Evolutionary games in the multiverse." Raf Aerts, a postdoctoral researcher from University of Leuven and University of Utah, says this image was taken in an area of high-shade tree cover in the Peruvian Andes. The area is part of a project to incentivize the conservation of forest biodiversity among coffee growers in the region:

“Here I am surveying old-growth secondary forest along the remote Rio Tunquimayo in the Puno province in SE Peru to determine the impact of coffee cultivation on bird conservation. The notebook shows my first record of the Yellow-browed Sparrow (above) and male and female White-winged Becards (mid and below). The sparrow may indicate disturbance, while the becard is a fly-catcher-like mid-level insect-eating bird of second growth and river-edge forest. The conservation of such insectivores is also beneficial for the coffee farmers as they contribute to insect pest control.”