Native language shapes the melody of a newborn baby's cry

Telling the difference between a German and French speaker isn't difficult. But you may be more surprised to know that you could have a good stab at distinguishing between German and French babies based on their cries. The bawls of French newborns tend to have a rising melody, with higher frequencies becoming more prominent as the cry progresses. German newborns tend to cry with a falling melody.

These differences are apparent just three days out of the womb. This suggests that they pick up elements of their parents' language before they're even born, and certainly before they start to babble themselves.

Birgit Mampe from the University of Wurzburg analysed the cries of 30 French newborns and 30 German ones, all born to monolingual families. She found that the average German cry reaches its maximum pitch and intensity at around 0.45 seconds, while French cries do so later, at around 0.6 seconds. 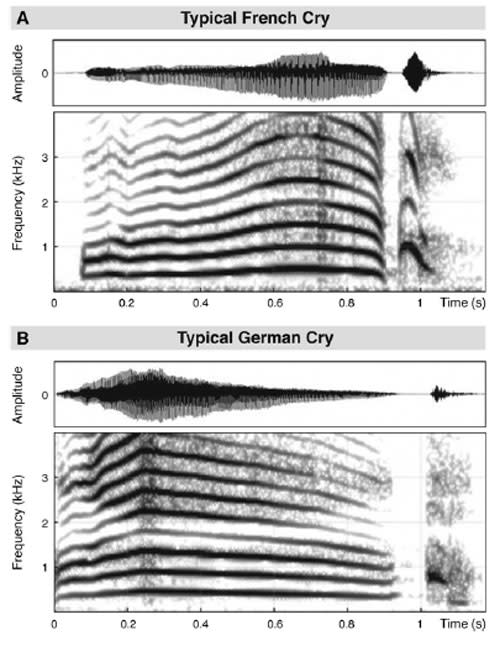 These differences in "melody contours" become apparent as soon as infants start making sounds of their own. While Mampe can't rule out the possibility that the infants learned about the sounds of their native tongue the few days following their birth, she thinks it's more likely that they start tuning into the own language in the womb.

In some ways, this isn't surprising. Features like melody, rhythm and intensity (collectively known as prosody) travel well across the wall of the stomach and they reach the womb with minimum disruption. We know that infants are very sensitive to prosodic features well before they start speaking themselves, which helps them learn their own mother tongue.

But this learning process starts as early as the third trimester. We know this because newborns prefer the sound of their mother's voice compared to those of strangers. And when their mums speak to them in the saccharine "motherese", they can suss out the emotional content of those words through analysing their melody.

Mampe's data show that not only can infants sense the qualities of their native tongue, they can also imitate them in their first days of life. Previously, studies have found that babies can imitate the vowel sounds of adults only after 12 weeks of life, but clearly other features like pitch can be imitated much earlier. They're helped by the fact that crying only requires them to coordinate their breathing and vocal cord movements, while making speech sounds requires far more complex feats of muscular gymnastics that are only possible after a few months.