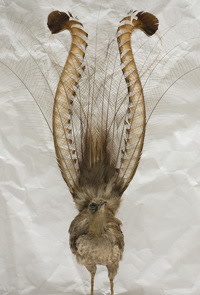 Flowers, flagella, feathers. Life is rife with complex features--structures and systems made up of many interacting parts. National Geographic magazine asked me to take a tour of complexity in life and report on the latest research on how it evolved. What struck me over and over again was how scientists studying everything from bacteria to humans are drawn back to the same concepts--making new copies of old parts, for example, or borrowing parts of one complex trait to evolve a new one. And in each case, complexity opens up the way to diversity, because something many parts can be rearranged in many ways. There's not yet a general theory for the evolution of complexity, but scientists are certainly converging on some of the same themes. My story, "A Fin Is A Limb Is A Wing," is in the November 2006 issue of the magazine. When the new issue was posted to the National Geographic web site today, I was pleased to find that my article is not hidden away behind a subscription wall. You can read the whole thing here. The web site also has a gallery of Rosamund Purcell's lovely (but slightly eerie) photographs that accompany the story. I was intrigued to see that the magazine has a forum for each article. I tried to see what sort of comments had been posted about my story, but couldn't get through. If anyone figures it out, let me know! (I'm also curious if I get the Mooney treatment for my efforts.) To supplement National Geographic's on-line features, I thought I'd point curious readers to a particularly good paper or scientific review for each of the examples I hit in the article. Behind my writing and Rosamund's pictures is a massive wall of scientific research. 1. Multicellularity. "The unicellular ancestry of animal development." Developmental Cell 2004. 2. Arthropod body segments. "Comparative developmental genetics and the evolution of arthropod body plans." Annual Reviews in Genetics, 2005 3. Vertebrate Head. "The new head hypothesis revisited" Journal of Experimental Zoology B 2005. 4. Eyes. "Casting a genetic light on the evolution of eyes" Science 2006. 5. Limbs. "The pectoral fin of Tiktaalik roseae and the origin of the tetrapod limb." Nature 2006 6. Feathers. "Evolution of the morphological innovations of feathers." Journal of Experimental Zoology B 2005. 7. Flowers. "Flower development and evolution: gene duplication, diversification and redeployment." Current Opinions in Genetics and Development, 2005 8. Flagella. "From The Origin of Species to the origin of bacterial flagella" Nature Reviews Microbiology 2006 [pdf]