Mysterious Islands Are A Hotspot For Marine Hybrids 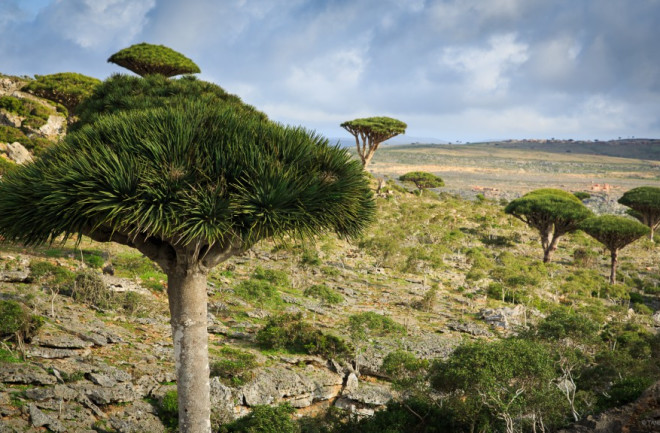 The Socotran landscape dominated by dragon's blood trees. Photo by Tane Sinclair-Taylor. Some 150 miles off the eastern coast of northern Africa — about 240 miles south of the Arabian peninsula — lies a set of islands that some have called "the most alien-looking place on Earth." Socotra, which is both the name of the archipelago and the largest island, is a truly bizarre place. More than a third of the plants that erupt from the soil are found nowhere else. Their odd shapes and forms give the islands a Dr. Seussian quality, an almost cartoonish, comical landscape that stands in sharp contrast to the strict religious practices of the people who live there. Socotra is a part of Yemen, a country currently engaged in a brutal civil war. But, it is also an island apart; the hundreds of miles of water that separate Socotra from the mainland have not only allowed biodiversity to take otherworldly forms, they have also allowed the people of Socotra to become distinct. The 50,000 or so people that live on the islands have their own language, myths and legends, and are their own governorate. Socotra has an archeological history that dates back to some of the earliest civilizations, complete with inexplicable cave art and 2,000 year old tools. The rich culture of the indigenous Soqotri has been insulated, like the flora and fauna they live alongside, for thousands of years — until the past decade, or so, when the Yemeni government has begun to open the islands to tourism. In 2008, the United Nations Educational, Scientific and Cultural Organization (UNESCO) declared the islands a world heritage site, citing the incredible uniqueness and diversity of the land's plants and animals — the "Galápagos of the Indian Ocean." In addition to the hundreds of endemic plants, more than 90 percent of the reptiles and land snails that live on the islands are exclusive to them. Culturally and ecologically, Socotra is a place where uniqueness flourishes. But the uniqueness of Socotra doesn't end at the waters' edge. Scientists have found that its coral reefs are pretty special, too — they're home to a heap of hybrids. "Fish species that might not encounter each other anywhere else in our oceans are meeting on the Socotra reefs. These species come together here to interbreed and in some cases, produce fertile offspring," explains Joseph DiBattista, lead author on a recent study detailing the extensive reef fish hybridization occurring at Socotra.

A map of Socotra and the various water bodies that it lies between, including the seven locations where hybrids were sought. Stars represent locations where parental specimens were collected for comparison. From DiBattista et al. 2015 The archipelago is in the middle of one of most geologically and oceanographically variable regions on Earth. Roughly 1135 kilometers to the west lies the Red Sea, where sea level has risen and fallen hundreds of feet in step with global glaciation over the past two million years, leading to severe changes in salinity and temperature. To the northeast about 630 km is the southern coast of Oman and its marine habitats, which experience drastic fluctuations in temperature and nutrient regimes. From May to September, the Somali Current causes upwelling of cold, nutrient-rich waters along Socotra's southern coast. But from October to February, the current reverses course, leading to high temperatures on the northern coast. Thus, says DiBattista, the archipelago receives larvae from ecologically diverse sources, and has the potential to harbor species that otherwise live in very different parts of the world. This confluence of waters from the Red Sea, Arabian Sea and Western Indian Ocean has given Socotran reefs higher levels of biodiversity than a lot of other sites in the Gulf of Aden, but unlike the species on land, very few of them are unique to Socotra. "Even though biodiversity is high, the level of endemism at Socotra is low, sitting somewhere around 1.4% at our latest count. This pales in comparison to its Red Sea neighbour, which has roughly 13% endemism” says DiBattista. But though the marine habitats there don't harbor unique species, they are special in other ways.

A stunningly diverse reef in Socotra. Photo by Tane Sinclair-Taylor Hybridization was once considered a rare event, particularly in the oceans. It is generally assumed that species which are closely related enough to potentially interbreed don't overlap that often, and thus opportunities for hybridization are few and far between. Even when such events occur, it was long believed that the offspring were less fit and thus rarely survived. But, a growing body of literature has come to suggest that gene flow between species is an important part of evolution in marine systems, "it is not simply a one off or novelty like the mule or the liger," said DiBattista. Even though the paradigm is shifting, there is still very limited information about hybridization in the marine realm. While it's fairly simple to watch individuals on land to determine if they are breeding outside their own species, it is much more challenging to make such observations underwater, especially when many species look very similar. "Unless you are looking for hybrids, you would miss them, as was the case at Christmas Island for many years," explained DiBattista. Christmas Island, which sits on the border between the Pacific and Indian Oceans, was the first marine hybrid hotspot scientists systematically characterized in the late 2000s. Since its discovery, scientists have started taking a closer look to see if there may be other hotspots where conditions lead to species intermixing. Given that the three different bodies of water, and thus the fish larvae they transport, all overlap at Socotra, the team hypothesized that some taxonomic irregularities may be due to hybridization. But demonstrating hybridization occurs would not be a simple feat. In the past 20 years, only a handful of surveys examined reef fish diversity in the area, and none of them collected tissue samples to determine hybridization genetically. So the team had to collect their own samples to test their hypotheses.

Home sweet home for the research team at one of the sites in Socotra. Photo by Tane Sinclair-Taylor While Socotra is open to tourism, political tensions have made research challenging in the area. DiBattista and his colleagues were only able to perform their study with the full support of the local Environmental Protection Agency. Even then, it wasn't a dream vacation. "Field conditions can be rustic and unpredictable," DiBattista explained. For DiBattista, the experience was humbling. "This is how the local people live," he said. He was touched by their willingness to accept him and his team into their village and facilitate their research. "The Socotran people are some of the friendliest people I have ever met." The team searched seven sites on the island of Socotra from 0 to 85 feet deep for potential hybrids — ones that looked visually in between two known species — and performed fish surveys to determine the relative abundance of the parental species. The team found several mixed species breeding pairs and a total of seven putative hybrid crosses from four different fish families — a total of 25 individual hybrids were collected for genetic analysis but more hybrid individuals were observed. Most were crosses between Red Sea to Gulf of Aden endemics and widespread Indian Ocean species, and in six of the seven cases, one or both of the parental species were extremely rare. Genetic analyses confirmed hybridization for four of them, while the remaining three were inconclusive.

Chaetodon melapterus (right) and Chaetodon trifasciatus (left). An interspecies breeding butterflyfish pair found by the research team. They also collected hybrid offspring of such a mating. Photo by Tane Sinclair-Taylor The hybrids the team found support the idea that the unique placement of Socotra on the edge of different water masses contributes to the high degree of hybridization found. But they also found hybrids between fish species that overlap outside of Socotra, begging the question as to whether there are other aspects of Socotra's reefs that promote hybridization. While seven types of hybrids might not seem like a lot of hybrid fish, it's important to note that the researchers only tested those that were visually obvious; many species' hybrids are much harder to spot. And, they only dove for five days. "Our preliminary surveys covered less than 1% of Socotra’s coral reef habitat on only one of four islands, did not sample habitat below 26 m and only examined 83 of the 620 species of Socotra marine ﬁshes," the authors wrote in their conclusions. According to Luiz Rocha, co-author of the study and ichthyology curator for the California Academy of Sciences, the team had aimed to go back this year for more sampling with support from the National Geographic Society, but the trip was cancelled due to the ongoing political conflict. It's unknown when it will be safe for them to return. Politics, poverty and even pirates threaten Socotra's incredible biodiversity, but thankfully, the government has so far stepped in to protect its marine resources. "Despite being considered part of one of the poorest nations in Arabia, and sitting right in the middle of one of the most volatile areas in the world, the island group has some of the highest level of protection afforded to coral reefs," explained DiBattista. The Socotran Environmental Protection Agency oversees the reef management largely independent of the mainland on a tiny budget, which makes their successes even more impressive. "Socotra represents the one source of light in an otherwise dark region," DiBattista said, paraphrasing one of the locals who helped make the project a success. He is hopeful that, someday, he will be able to return and explore more of the country's beautiful reefs to further document just how special they really are.

"One source of light in an otherwise dark region" said DiBattista. It's not hard to see why. Tane Sinclair-Taylor Reference:

Disclosure: I have coauthored papers with DiBattista during my doctoral career, and my PhD advisor, Brian Bowen, is another coauthor on the paper.