My love letter to the makers of Frozen Planet 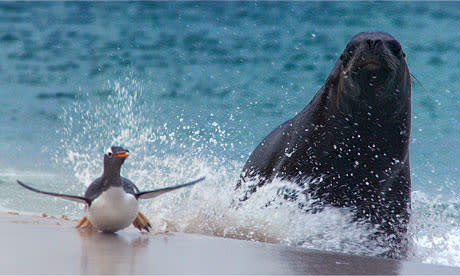 The first episode of Frozen Planet - the BBC's new mega-series on life at the poles, fronted by the peerless David Attenborough - aired on Wednesday. It exceeded my already lofty expectations, and I've written a comment piece for the Guardian that's a bit of a love letter to the makers of the show, the BBC's Natural History Unit, and the BBC's attitude to science programmes more generally. Extract below; go read the whole thing.

Giant unicorn-whales with tusks? That's why I pay my licence fee

Here is what I do when I'm feeling down about the country: I load up the Wikipedia page for the BBC Natural History Unit and click on the "In Production"

, a majestic tour of Arctic and Antarctic wildlife ably narrated by Sir David Attenborough, an 85-year-old man who insists on travelling to the south pole while people many decades his junior make a small noise whenever we sit down. On the screen, polar bears mate and fight, wolves run down herds of bison

and lunging whales create concentric ripples of fleeing fish. It would take several thousands of pounds to see these sights in person, but for £145.50 a year

, I can recline on my sofa and watch the world's jammiest penguin escape from the world's most incompetent sea lion. From the screen, that velvety voice: "Never have the roles of hunter and hunted been played with so little skill." Fortunately, the same can't be said for the people behind the cameras. Photo via BBC NHU