Moth and plant hit on the same ways of making cyanide 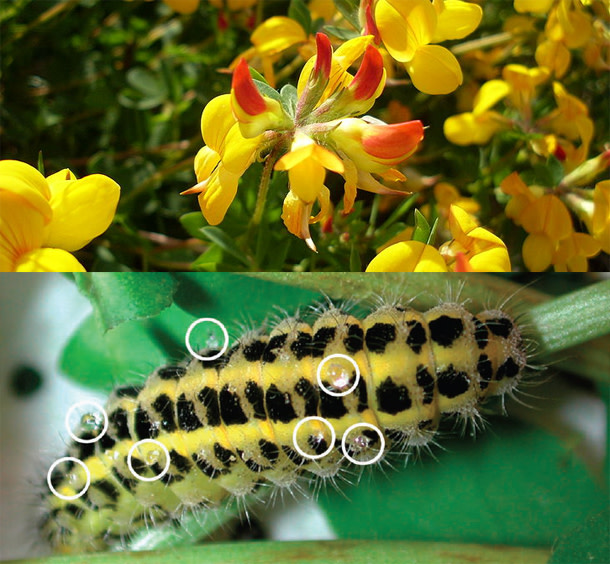 If “cyanide two-ways” sounds like an unappetising dish, you’d do well to stay clear of the bird’s-foot trefoil. This common plant flowers throughout Europe, Asia and Africa, and its leaves are loaded with cyanide. The plants are also often crawling with the caterpillars of the burnet moth, which also contain a toxic dose of cyanide The poisons in the insect are chemically identical to those of the plant, and they are produced in exactly the same way. But both species evolved their cyanide-making abilities separately, by tweaking a very similar trinity of genes. This discovery, from Niels Bjerg Jensen at the University of Copenhagen, is one of the finest examples of convergent evolution – the process where two species turn up for life’s party accidentally wearing the same clothes. Recently, several studies have shown that the convergence runs very deep. Many animals have hit upon the same adaptations by altering the same genes. Rattlesnakes and boas evolved the ability to sense body heat by tweaking the same gene. Three desert lizards evolve white skins through different mutations to the same gene. The literally shocking abilities of two groups of electric fish have the same genetic basis. These cases are perhaps understandable, since the species in question aren’t too distantly related from one another. It’s perhaps more surprising to learn that bats and whales evolved sonar via changes to the same gene, or that venomous shrews and lizards evolved toxic proteins in the same way. But the cyanide-making genes of the trefoil and the moth take these disparities to a whole new level. Here is a case of convergent evolution between entirely different kingdoms of life! When the burnet moth caterpillars eat the trefoil leaves, they can absorb the cyanide for their own use. If predators threaten them, they exude the poison in the form of sticky droplets. But they can also supplement the stolen poison by making their own. Both moth and plant are armed with two cyanides, known as linamarin and lotaustralin. They have humble origins – they’re made from the amino acids valine and isoleucine, two of the building blocks of life. The trefoil uses three genes to convert these harmless starter chemicals into their deadlier descendants. By searching the skin of burnet moth caterpillars for genes from the same families, Jensen showed that the insects produce linamarin and lotaustralin using a similar genetic trinity. Jensen found that the moth and plant genes produce proteins that are similar in shape, even though the genes themselves are different in sequence. The moth trinity is more closely related to similar genes in silkworms, while the plant ones are a closer match for genes in the mustard cress. This means that the genes haven’t jumped from one species to another; they evolved independently. There are a few other examples of convergence across kingdoms, including cases where plants and fungi have evolved ways of producing the same substances from the same starting points. But they always get there via different chemical reactions. By comparison, the burnet moth and trefoil turn amino acids into cyanides through exactly the same chemical reactions, even though they have been separated by over 1.4 billion years of evolution. Reference: Jensen, Zagrobelny, Hjerno, Olsen, Houghton-Larsen, Borch, Moller & Bak. 2011. Convergent evolution in biosynthesis of cyanogenic defence compounds in plants and insects. Nature Communications http://dx.doi.org/10.1038/ncomms1271More on convergent evolution: