One of the most active volcanoes in the Canary Islands erupted this weekend after 50 years of quiet. 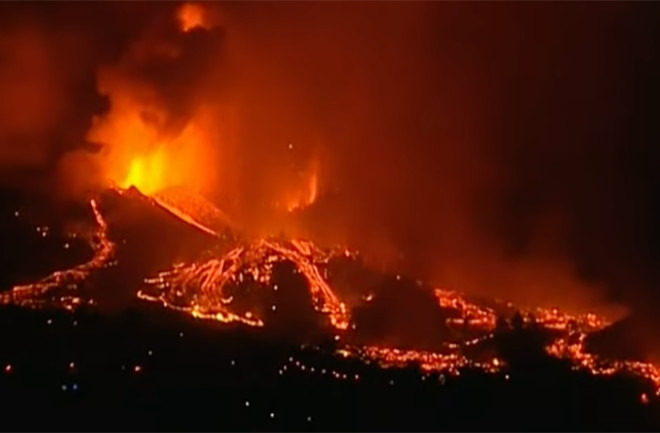 The eruption of Cumbre Vieja on La Palma in the Canary Islands on September 19, 2021. Credit: INVOLCAN.

For the first time in 50 years, Cumbre Vieja on the island of La Palma has erupted. This shield volcano (think Hawaii) is one of the most active volcanoes in the Canary Islands off the coast of Africa but had been silence since 1971. That all changed Sunday afternoon when the volcano burst back to life after a week of earthquakes that suggest magma rising up into the volcano.

Footage of the eruption shows the typical long lava flows and lava fountains that are expected from a volcano like Cumbre Vieja. The basaltic lava is less likely to cause an explosive eruption, so danger to lives is limited. However, the opening moments of the eruption captured by a news team show a dark cloud of ash (again, not uncommon in the opening moments of these style eruptions). It quickly became an impressive lava fountain that fed lava flows.

Webcam video of the eruption is spectacular, showing the multiple eruption vents and long tongues of lava reaching down the slopes of the volcano. Over 18,000 people live within 6 miles of Cumbre Vieja and many have had to be evacuated due to this eruption. The lava flows are what has prompted the evacuation of over 5,000 people from the area near Cumbre Vieja. Recent reports have at least 8 homes destroyed by these lava flows.

INVOLCAN, the monitoring agency watching the volcano had reported hundreds of earthquakes last week, leading to an increase in the alert status at the volcano. Footage taken of the eruption by INVOLCAN staff members show the large, chunky a'a lava flows and let you hear the roar of the vent erupting uphill from their location.

The island of La Palma is made of two overlapping volcanoes, much the same way that Hawai'i is made of 5 volcanoes. The younger, more active one is Cumbre Vieja -- the one currently erupting. The older one is Caldera Taburiente and it has a history of large landslides associated with its eruptions. These are the landslides that may have produced large tsunamis in the past. Luckily, the current eruptions are not on this older volcano and are highly unlikely to create the massive landslides needed for an Atlantic Basin tsunami.

All of the Canary Islands were formed by a volcanic hotspot -- a plume of hot material that rises and melts underneath the oceanic crust off Africa. This is the same kind of process as Hawai'i, where as the plates slow move, a "track" of volcanoes is left in its wake. The volcanoes of the Canary Islands are much less active than their Hawaiian counterparts likely because the hotspot feeding them is less vigorous.

This is the first eruption in the Canary Islands since 2012, when a submarine volcano off the coast of El Hierro filled the sea with strange floating "coconuts" made of sea sediment and lava. That eruption last about half a year. The last eruption of Cumbre Vieja in 1971 last just short of a month. Eruptions further in past few hundred years had similiar longevities of weeks to a month or so. We don't know if the current eruption on La Palma will follow that pattern, but the volcano's history suggest it might not be too long before it heads back to sleep.