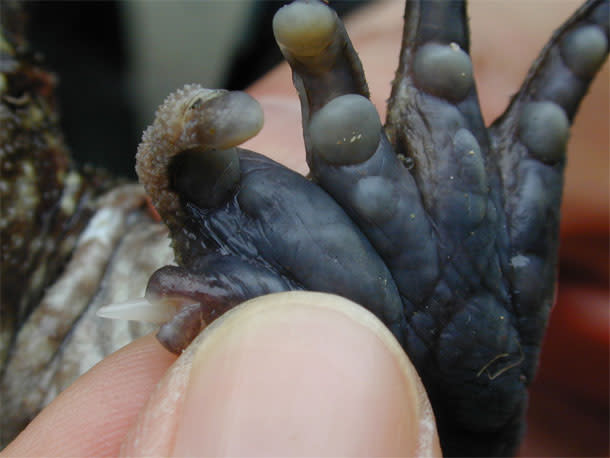 Four years ago, I wrote about a group of African frogs that remind me of the Marvel Comics character Wolverine, who fights with three retractable claws in each arm. The frogs, belonging to the family Arthroleptidae, also have bone claws in their feet. They use these in defence, as many naturalists discovered to their dismay. They’re not alone. On another continent, Noriko Iwai from the University of Tokyo has studied a different species – the Otton frog – that carries a similar bony spike in its foot. It’s large for a frog, growing to around 12 centimetres in length. The males use their spikes as anchors to latch onto females, and flick-knives for duelling with rival males. Stranger still, the Otton frog houses its spike in a “thumb”, which other frogs lack. Frogs have five toes on their hind legs, just like us, but most species have just four on their front legs. There are exceptions, though, and the Otton frog is one of them. It has a fifth front toe – a “pseudothumb” – which houses its spike. 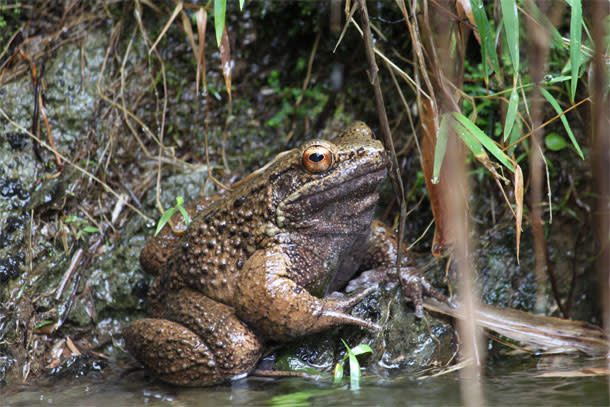 Iwai first described the spike in 2010, but she had no idea how it was used. The species is hard to study—it’s endangered, and only found on in the Amami Islands in southern Japan. Since then, Iwai has been carefully observing the frogs at their breeding sites, videotaping their behaviour with infrared cameras, and gently inspecting captured animals. When captured, they’d kick out furiously. But when something irritated their chest, they’d pull their arms in and jab the spines towards themselves, as if to deliver a stabbing hug. The jabs of female frogs are so weak that they barely hurt. The males, however, are more forceful – they are bigger, they have longer and thicker thumb-spikes, and they’re better at unsheathing those spikes from their thumbs. In the delightfully deadpan style of academia, Iwai wrote: “If jabbed in the finger by a male’s spines, the researcher responded by dropping the frog.” I imagine so. Iwai found that the males use their spikes during sex to hold onto the females, which end up with stab wounds on their sides and armpits. More than a third of them bear the scars of these encounters. Iwai even tried to prise a mating male off his partner, and found his thumb dug into her side (see image below). 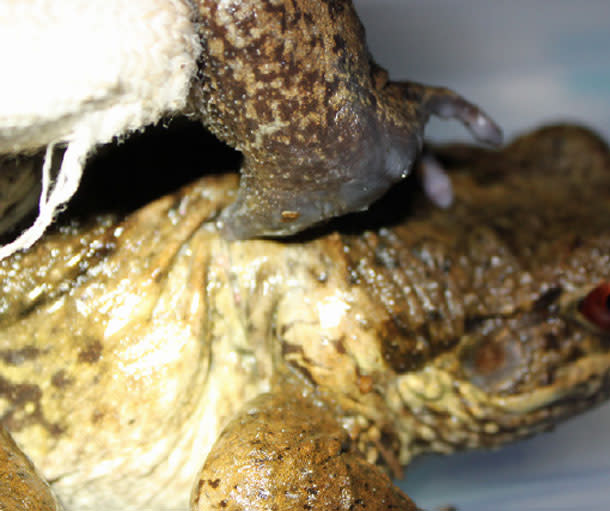 The males also fight each other with their weapons, often ambushing another male mid-coitus. Their bouts are intense (video), as are Iwai’s descriptions:

“At 03:28 h when the couple started laying their eggs, another male (male A) suddenly head-butted the amplexing [a mating position - EY] male (male B), and the two grappled with a growl. Male A jabbed his arms into the head of male B while holding its head from two sides. Male B struggled to escape from the grasp of male A, but male A continued jabbing. For more than 4 min, male B kept trying to escape from male A by kicking and flapping. While grappling, the two frogs floated deeper into the water away from the center of the screen.

The Otton frog isn’t the only species to behave this way. A distantly related Central American species, Hypsiboas rosenbergi, also uses a spiky pseudothumb during combat. Their fights seem even more brutal – they jab their spines at the eyes and ear drums of their opponents, often inflicting lethal wounds. The Otton frogs are more restrained – males end up with scars, but they keep their lives. Other animals have also developed an extra digit, typically by extending one of the bones in the wrist. The giant panda uses its “pseudothumb” to grasp bamboo, and the elephant uses a sixth toe to support its massive bulk. The Otton frog uses its extra digit for two very different purposes: a mating anchor, and a fighting weapon. Iwai thinks that the anchor role came first. While many frogs breed in a disorganised mob, with many males crowding a female and randomly fertilising eggs, the Otton frog breed as a single pair. This leads to intense competition, and might have driven the evolution of a anchor to prevent the males from being dislodged. As this spike became larger, it gained a secondary role: as a tool for combat. Reference: Iwai. 2012. Morphology, function and evolution of the pseudothumb in the Otton frog. Journal of Zoology http://dx.doi.org/10.1111/j.1469-7998.2012.00971.xImages by Noriko Iwai