I was happy to see that my post on Tuesday about the evolution of whales attracted a lot of readers. One commenter asked about seals and manatees. As other commenters kindly explained, those mammals descend from other ancestors (relatives of bears and elephants, respectively) that independently moved into the water. This transition has occurred many times since vertebrates moved on land. In some cases, the animals have adapted completely to the water (such as marine reptiles). In other cases, the transition has not been so complete. Other relatives of elephants evolved into desmostylians, sometimes called "sea-bears." They looked like polar bears but fed on aquatic plants. (pdfs here and here) The picture here is of Paleoparadoxia, from Siberia. And then there were the aquatic sloths. Yup--sloths. Here's a post I wrote on their transition to the sea. 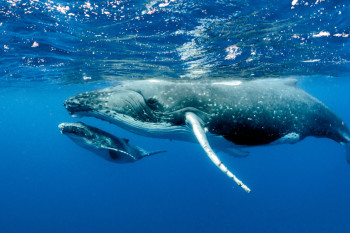