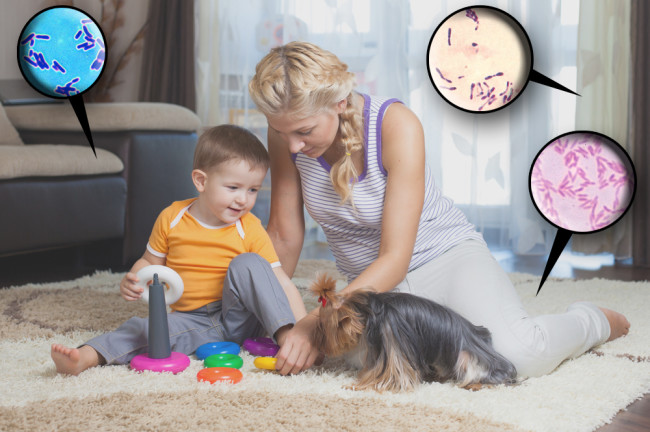 We often think of our homes as clean and the outdoors as dirty, but it turns out that our homes actually contain a more diverse population of microbes than the dirt outside — and most of them came from you and your pets. That’s the finding of a new study that surveyed the fungi and bacteria in 1200 houses across the U.S.

Some of the microbes in our homes may be harmful; they may cause diseases or allergic reactions. Others are beneficial, because they help children develop healthy immune systems and prevent allergies later in life. Either way, they are an important part of our lives and an important factor in our health. However, up till now, we’ve had a very limited understanding of the normal populations of microbes that live in our homes. To address that question, researchers led a citizen science project, called Wild Life of Our Homes, in which they collected dust samples from 1200 houses around the continental United States. Volunteer participants swabbed both the upper trim of an interior door and the upper trim of an exterior door. Scientists reported this week in Proceedings of the Royal Society B that each home had its own microbial ecosystem, clearly distinct from the microbial ecosystem found outside, and that indoor microbial ecosystems were 50 percent more diverse than outdoors. Outside, a handful of species tended to dominate the whole ecosystem, but indoors, researchers found a menagerie of fungi and bacteria. And most of the types of bacteria that make a house’s microbial ecosystem unique actually come from the people and animals who live in the house. Your body contains a teeming, diverse population of bacteria, which scientists call your microbiome. As you go about your day, your body sheds some bacteria from your skin, your mouth, and even your feces into your environment. The result is that your home has its own microbiome, a community made of up of bacteria shed by everyone who lives there. It’s like a microbial signature for your family.

And that includes your pets. In fact, dogs were the most important factor in a home’s microbial diversity, according to Barberab and his colleagues. Just based on the types of bacteria present in household dust, researchers could predict with 92 percent accuracy whether a dog lived in the house. And 83 percent of the time, they could predict whether a cat lived there. That’s because household pets also have their own unique microbiomes. Researchers found 56 genera of bacteria that are more common in homes with dogs, and another 24 genera that are more common in homes with cats. Most of these are bacteria that normally live in pets’ mouths or feces, which sounds gross, but scientists say it’s actually not a bad thing. Most of the bacteria your pets carry can’t make you sick, and they may actually be useful in the long run. “There is some evidence that exposure to dog microbes may actually be beneficial to children, reducing incidences of allergies,” study co-author Nathan Fierer said.

Of course, human inhabitants also contribute their share of bacteria to each house’s microbial community, and researchers say they can predict the sex of the people who live in a house based on the bacteria in its dust. Homes with more men than women tended to have more skin and fecal bacteria in their dust. The difference is partly biological; men’s skin tends to have larger populations of the skin bacteria Corynebacterium, for example, and Barberan and his colleagues say that men’s bodies naturally tend to shed more bacteria than women’s. On the other hand, homes with more women than men tended to have more Lactobacillus, a genus of bacteria that includes several of the species that make up the vaginal microbiome.

The Fungi Among Us

Unlike bacteria, most of the fungi in your home come from outside, according to the researchers. So the types of fungi in your home mostly depend on the climate where you live. Since nearly a third of the fungi found in household dust were potential allergens, the researchers say that regional differences in household fungi could also explain regional differences in allergies. The populations of indoor fungi mostly depended on the age of each house, whether the house had a basement, and whether the family included dogs.

Understanding our homes’ microbial residents will hopefully help researchers understand how our living environment affects our general health. After all, we spend a lot of time indoors, point out the authors: “As humans become ever more urban and we now spend the majority of our lives indoors, the time we spend with the microbial taxa found inside homes is increasing.” And they offered some cheeky advice for those concerned about the microbes who share their homes. “If you want to change the types of fungi you are exposed to in your home, then it is best to move to a different home (preferably one far away),” they wrote. “If you want to change your bacterial exposures, then you just have to change who you live with in your home.”