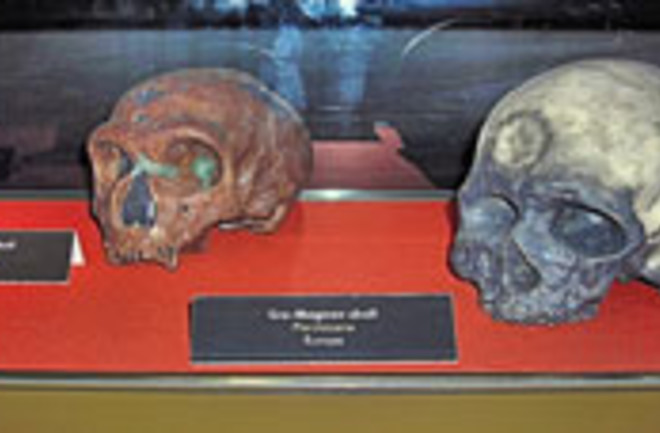 Cro-Magnon people and Neanderthals may have shared their European habitat from 45,000 to 30,000 years ago, but new evidence suggests that they didn't get more intimate than that. Italian researchers sequenced mitochondrial DNA from Cro-Magnon bones dating from 28,000 years ago and found no trace of Neanderthal DNA, suggesting that the two early hominids did not interbreed to create modern humans. The fate of the Neanderthals, who vanish from the fossil record around 30,000 years ago, has been fiercely debated.

One theory, known as the Out of Africa hypothesis, holds that modern humans, whose ancestors had recently migrated from Africa, drove the Neandertals extinct, possibly through warfare, disease, or cognitive advantage. But the competing multiregional hypothesis argues that Neandertals and modern humans interbred and that Neandertals were absorbed into our gene pool [ScienceNow Daily News].

The new study, published in the journal PLoS ONE, supports the extinction theory. Lead researcher Guido Barbujani has tried to make this case before:

His team published similar findings in 2003, but that study left open the possibility that the Cro-Magnon DNA had been contaminated by the researchers' own genes. Now, Barbujani's team has sequenced a section of DNA from everyone who handled the sample and found no trace of contamination. "We knew we had a full and complete list of people who had potentially contaminated the specimen," he says. "In this case we are really sure that that sequence does not represent contamination" [New Scientist].