As lightning crackled in the clouds, the GOES-16 weather satellite watched all the violent action from 22,000 miles away. 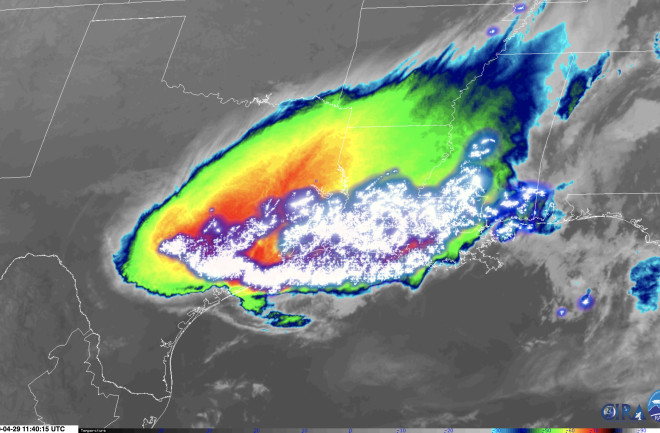 A giant cluster of thunderstorms, known as a Mesoscale Convective System, or MCS, as seen on April 29, 2020, by the GOES-16 weather satellite. (Credit: RAMMB/CIRA)

Meteorologists have a dry name for the feature seen in the satellite image above: a mesoscale convective system, or MCS.

But, as I think you’ll agree, particularly after you watch the video below, this thing is a veritable beast — a gargantuan cluster of thunderstorms with countless lightning bolts crackling as the entire complex charges south.

The MCS blossomed in Kansas and gathered strength during the night, bringing high winds, drenching rain and lightning — lots of lightning.

Consisting of multiple thunderstorms traveling in a cluster, mesoscale convective systems are not uncommon in the U.S.’s midsection during spring and summer. As with this one, they typically occur at night.

The GOES-16 weather satellite imagery of the MCS combines a false-color infrared view with a map of the lightning based on data acquired by an instrument called the Geostationary Lightning Mapper, or GLM.

With the GLM, scientists are able to study electrical activity in the atmosphere, ranging in scale from the entire Western Hemisphere down to individual thunderstorms. The instrument provides information about lightning in near-real time, providing weather forecasters with valuable data to help them detect severe storms quickly enough to warn the public in advance.