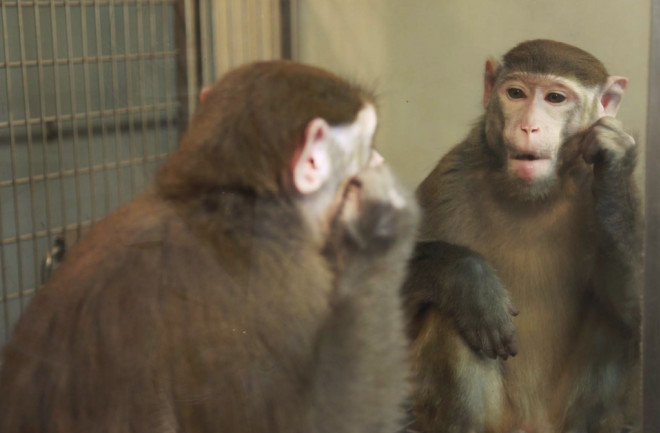 This is a scene from experiments showing that rhesus monkeys can learn to recognize themselves in the mirror. (Neng Gong et al. 2015 Current Biology)

What would you do if you saw yourself in a mirror for the first time? When, after weeks of training, rhesus monkeys learned the true identity of their reflections, one of the first things they did was check out all the locales on their bodies they’d never before seen — and we mean every intimate nook and cranny.

The fact that these monkeys could look in a mirror and recognize those nether regions was stunning. That’s because rhesus monkeys have never proven that they can recognize themselves in a mirror. However, researchers proved that, through a little training, they could foster a certain sense of self-awareness in these primates. And that could teach us more about how the brains of humans and other primates allow them to self-recognize in a mirror.

Many creatures in the animal kingdom know it's them in their reflections. Humans do (beginning as young as 2), as do dolphins, great apes and elephants, to name a few. We know rhesus monkeys struggle at this because they routinely fail a common test for self-recognition called the standard mark test.

Basically, researchers put a colored, odorless marking on the face of an animal or shine a laser pointer at a particular place on their body. If, while looking in the mirror, the animal touches its own face or rubs at the mark, they pass the test. Some animals, like pigeons, fail this test initially, but they can learn to recognize their reflection with extensive conditioning.

Knowing this, researchers wondered if rhesus monkeys were the same. So, they gathered seven monkeys and started a simple training regimen. They sat each monkey in a secure chair facing a mirror. Then they shined a red laser dot that caused mild skin irritation somewhere on each monkey’s face.

Every time monkeys pawed at the dot they received a treat. As their training progressed, monkeys pawed at a non-irritating laser dot, and eventually touched an odorless red dye mark on their faces when looking in the mirror.

After receiving their training, the monkeys were ready for their final test: the standard mark test. Researchers shined a laser pointer at different parts of the monkeys' bodies while they were in their home cages, which were decked out with floor-to-ceiling mirrors.

To prove the monkeys' newfound knowledge wasn’t just a conditioned response (i.e. pawing their own faces whenever they saw a monkey face with a dot), researchers put them in a cage with a marked, untrained monkey.

Rather than pawing their own faces, the trained monkeys rubbed and licked at their untrained counterparts’ mark. Thus, trained monkeys weren’t rubbing their faces simply at the site of a red mark. Researchers published their findings Thursday in the journal Current Biology.

And what did these monkeys do with their new sense of self? They looked at their genitals, of course. Without any prompting, researchers caught the little narcissists contorting and spreading their legs in front of the mirror to get a better look at previously unseen corners of their bodies.

But who are we to judge? Researchers say their study is far from simply monkey business, however. Studying the way monkeys’ brains change during their mirror training could guide researchers toward the neural origins of self-recognition. Although humans can do this automatically, this skill is impaired in people with mental disabilities, autism or Alzheimer’s.

Knowing how monkeys acquire this skill could, perhaps, help people with these conditions learn it as well. In the meantime, we have a tip for those exhibitionist monkeys: Save yourself the contortions and just invest in a Belfie like the rest of us.