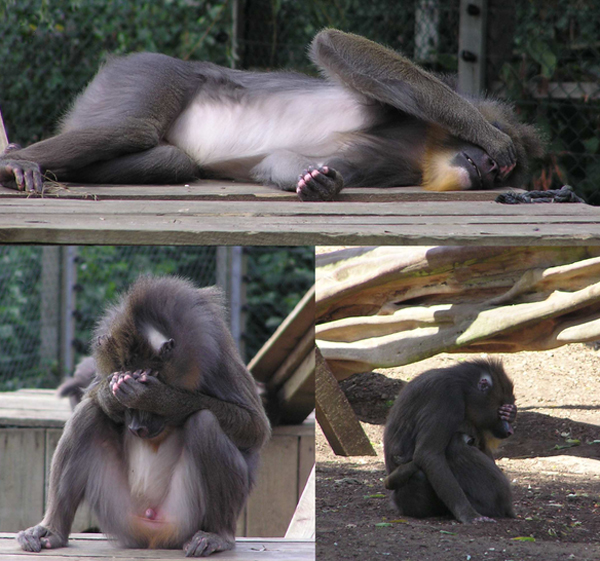 A group of English mandrill monkeys has started doing facepalms. The monkeys live in a zoo in Colchester, England, and eight of them frequently raise one or both of their hands to cover their eyes. They might be the only ones in the world who perform this distinctive gesture. Liz Butcher, a former keeper at the zoo, was the first to notice the gesture in a female mandrill called Milly, way back in 1999. Milly still does it and it’s caught on among seven other individuals within the group (out of 23), without any training or encouragement from the other keepers. Mark Laidre from Princeton University has now documented the facepalms (he calls them “eye covering”) in great detail. After searching the literature, talking to field scientists, and contacting keepers from 18 other zoos around the world, he’s convinced that the gesture is unique to the Colchester mandrills. Many of these other communities have been watched closely for decades. The odds that everyone just missed the gestures are low. But why are they doing it? It's unlikely that they’ve found something stupid on the Internet. Nor are the mandrills trying to block out light. They’ll make the same gesture in the shade or under overcast skies and only a third of the facepalms happened in direct sunlight. They’re not trying to wipe anything away, for the facepalms can last for as long as 17 minutes. The facepalms didn’t happen in any specific social context either, such as face-offs between two individuals. The monkeys always did it when they were sitting or lying down. But they weren’t sleeping – they would “frequently glance back and forth, apparently peeking through cracks between their fingers to survey the locations of other community members”. If a dominant mandrill drew near, they would immediately withdraw their hands and move away. Instead, Laidre thinks that they’re used the gesture as a signal for avoiding social interactions. They’re the monkey equivalent of a “Do Not Disturb” sign. Typically, the mandrills covered their eyes when they were alone, and those that did so were more likely to be left alone (compared to similarly posed monkeys whose eyes were uncovered). They were also more likely to cover their eyes in the middle of their enclosure, where they were most likely to be disturbed. Laidre also found that the lowest-ranking mandrills were most likely to make facepalms. Milly, for example, was second from bottom in the mandrill pecking order. It suits these subordinates to minimise their disturbances from other dominant members of the group, who might be prone to attack them. Indeed, Milly covered her eyes most often when she was in the company of her vulnerable children. Why is the facepalm unique to Colchester’s mandrills? There’s no reason to think that the colony is special. They’re a genetically diverse lot that live in an enclosure very similar to those in other zoos. And it’s unlikely that the Colchester keepers inadvertently passed the movement onto their charges (say, by wiping their brow) because monkeys, unlike apes, won’t readily mimic human gestures. Instead, Paidre thinks that it’s a sign of monkey culture – a unique tradition that started with Milly and has passed on to other members of the group. It’s possibly telling that some of the other eye-covering mandrills have added an element to the gesture that Milly never does – they raise their elbows in the air while blocking their eyes. It’s also reasonable to think that Milly did indeed pass on the facepalm to her peers, although Paidre hasn’t actually done any experiments to show that the mandrills can do this. Such experiments can are tricky but the Colchester bunch might provide a good starting point. If one of them is ever transferred to a different zoo, it will be fascinating to see if their gesture carries with them. It’s a reasonable explanation, but Paidre has a lot of work to do before he can confirm it. He’ll need to study the effect that the facepalm has on other mandrills, perhaps by playing footage of the gesture to them. Are dominant individuals really less likely to bother an eye-covering subordinate? Would a mandrill take its hand away if a barrier is erected between it and its peers? Clearly, the eye-covering mandrills of Colchester are ones to watch. Reference: