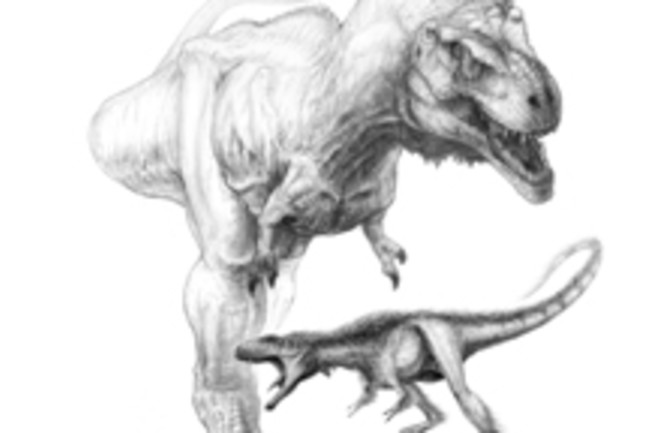 Call it an evolutionary beta test. About 125 million years ago a dinosaur stalked the world, and this predator had a familiar shape: It stood on strong back legs but had runty forelimbs, had a whip-like tail, and had a disproportionately large head with vicious teeth. But while that sounds like a description of the mighty Tyrannosaurus rex, this beast actually lived 35 million years before T. rex--and it was only 9 feet tall. The discovery of the new species, which has been named Raptorex kriegsteini, has upended previous theories about how the king of the lizards evolved. Says study coauthor Stephen Brusatte:

“The thought was these signature Tyrannosaurus features evolved as a consequence of large body size.... They needed to modify their entire skeleton so they could function as a predator at such colossal size” [The New York Times].

Instead, it appears that these features evolved in the early ancestors of T. rex, and that over the epochs the animals simply scaled up. In a new paper, published in Science, the paleontologists describe a nearly complete fossil that was found in China. Lead researcher Paul Sereno says that the 150-pound Raptorex

Previously, many researchers had believed that the T. rex's forelimbs shrunk into nearly useless appendages as the dinosaur evolved and gained in overall size. The new findings reveal that this limb design was set early on because it proved effective for the Raptorex. Sereno says the

"long, heavy forelimbs are a significant burden and would seriously curtail agility in the hunt" [National Geographic News].

Related Content: 80beats: Yes, T. Rex Had a Bad-Ass Sniffer. But Was It a Bad-Ass Hunter? 80beats: Duck-Billed Dinosaur Grew Up Fast in a Race Against Its Grim Reaper: T. Rex DISCOVER: Chomp Champ on recreating a T. rex bite Image: Todd Marshall