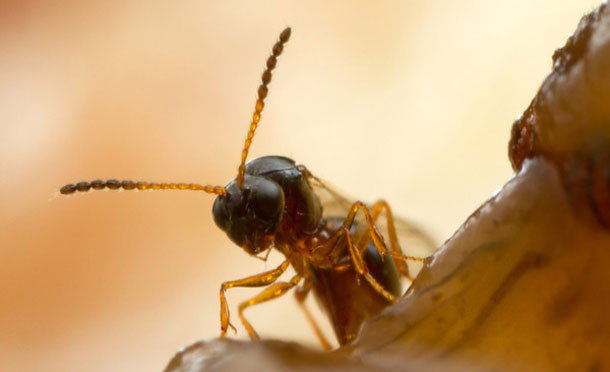 In a French meadow, a creature that specialises in corrupting the bodies of other animals is getting a taste of its own medicine. Leptopilina boulardi is a wasp that lays its eggs in fly maggots

. When the wasp grub hatches, it devours its host form the inside out, eventually bursting out of its dead husk. A maggot can only support a single grub, and if two eggs end up in the same host, the grubs will compete with one another until only one survives. As such, the wasps ensure that they implant each target with just one egg. And if they find a maggot that has already been parasitized by another L.boulardi, they usually stay away. Usually, but not always. L.boulardi is sometimes infected by a virus called LbFV, which stands for

. And just as the wasp takes over the body of its maggot target, so the virus commandeers the body of the wasp. It changes her behaviour so that she no longer cares if a maggot is already occupied. She will implant her eggs, even if her target has an existing tenant. After infected wasps are finished, a poor maggot might have up to eleven eggs inside it. The virus’s manipulation is extraordinarily specific. An infected wasp moves much less, and grows slightly slowly, but her odds of survival stay the same. The virus barely harms her health. Nor does it affect her ability to detect the scent of a maggot or a mate. It only seems to affect her attitude to the one-egg-one-maggot rule. How does it do this? We don’t know. Why does it do it? That much is clearer: by changing the wasp’s behaviour, the virus spreads itself. The virus is heritable, and female wasps transmit it to their own eggs. From there, the virus can jump into any other eggs in the vicinity. So if a wasp implants a maggot that carries someone else’s egg, the virus gets a new lineage of wasps to infect. Julien Varaldi

from the University of Lyon first discovered LbFV in 2003, and he has spent the last decade unveiling the quirks of its wasp-management ability. Now, he has found another twist in its relationship with its insect vessels. The same French countryside is home to a closely related wasp called Leptopilina heterotoma. It targets the same flies as L.boulardi and both species will lay eggs in maggots occupied by the other. If they do, they compete, and L.boulardi typically wins. Varaldi kept maggots in vials with equal numbers of both wasps, and he found that 92 per cent of the insects that eventually burst out of the doomed larvae were L.boulardi. The same thing happened when Varaldi set up more realistic cages containing flies and both wasps. In every case, L.boulardi monopolised the maggots and L.heterotoma died off. But the LbFV virus turns the tables of this competition. The virus never infects L.heterotoma, and when it infects L.boulardi, it weakens its competitive edge. In the vial experiments, the grubs of both wasp species suddenly did as well as one another. In the cage set-ups, L.heterotoma actually managed to eliminate L.boulardi on three of five trials. Why? The virus makes L.boulardi waste its eggs. Under normal circumstances, it lays one egg per host, and saturates the supply of available maggots with its spawn. If L.heterotoma lays in these infected maggots, its young are bested by L.boulardi’s within their shared host. But thanks to LbFV, L.boulardi putsits eggs into too few baskets, leaving plenty of maggots for L.heterotoma to attack unimpeded. This discovery helps to explain why there’s room enough in the same French fields for both wasps, even though they compete for the same hosts. Other scientists have suggested that they might keep to different schedules, or stick to restricted areas. Instead, Varaldi’s study suggests that the key to this tenuous co-existence could be a inherited, mind-controlling virus. Using a mathematical model, Melanie Hatcher, Jaimie Dick and Alison Dunn predicted an interaction exactly like this in 2008

. They showed that if a parasite has more harmful effects on the ‘stronger’ of two competing species, it’ll allow a ‘weaker’ one to persist, or even dominate an ecosystem. The case of the virus and the two wasps is a perfect example of the trend that they envisioned through equations. Reference: Patot, Allemand, Fleury & Varaldi. 2012. An inherited virus influences the coexistence of parasitoid species through behaviour manipulation. Ecology Letters http://dx.doi.org/10.1111/j.1461-0248.2012.01774.x