The secret lies right where you wouldn't expect it: in the bird's upstroke. 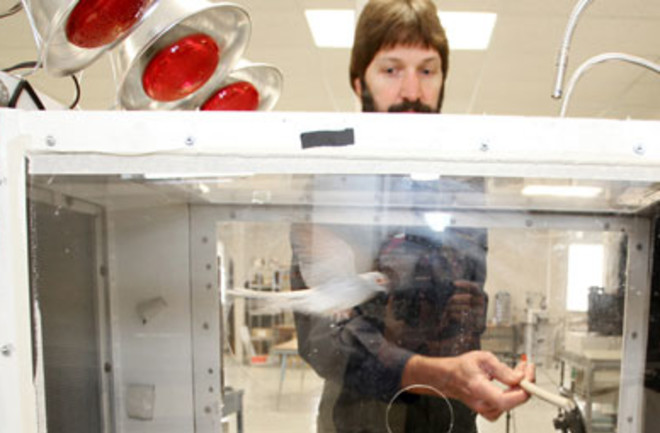 The aerodynamics of nature’s greatest hovercraft, the nectar-loving hummingbird, has long eluded scientific explanation. The tiny bird can buzz above a flower for minutes just as some insects do, and even fly backward and sideways, outmaneuvering most other birds. Now biologist Bret Tobalske of the University of Montana Flight Laboratory and his colleagues have documented the hummingbird’s remarkable flying skills in unprecedented detail, rendering surprising insights into how the bird stays aloft.

To catch the bird in action, Tobalske and his team employed an unusual visualization technique involving a clear plastic box, high-speed military cameras originally designed to document ballistics, a laser, and a few spritzes of olive oil.

In their experiments, a hummingbird is set loose in one side of the box. As it darts for sugar water on the other side, it rapidly flaps its wings, flying through a laser-illuminated fog of vaporized olive oil particles. Cameras, meanwhile, snap pictures at a rate of 1,000 per second (standard movie cameras take 24). “We joke that the lab smells like pizza,” Tobalske says. “But the oil droplets show up brilliantly in the photos as shiny points on a dark background.” Computer software then analyzes the motion of the oil particles to determine airflow and the force applied by the bird’s wings.

Tobalske discovered that the bird generates vortices on upstrokes that produce lift. When he implanted miniature sensors in a hummingbird’s muscles, he found that the whirlpools of air allowed the bird to rest its pectoral muscles during the downstroke and conserve energy.

Interestingly, other researchers have found that insects, bats, and even maple-seed pouches that spin like helicopters employ a similar strategy while hovering. “All these different species have converged on the same approach,” Tobalske says. Upcoming experiments will explore the flight mechanics of heavier birds, such as pigeons.