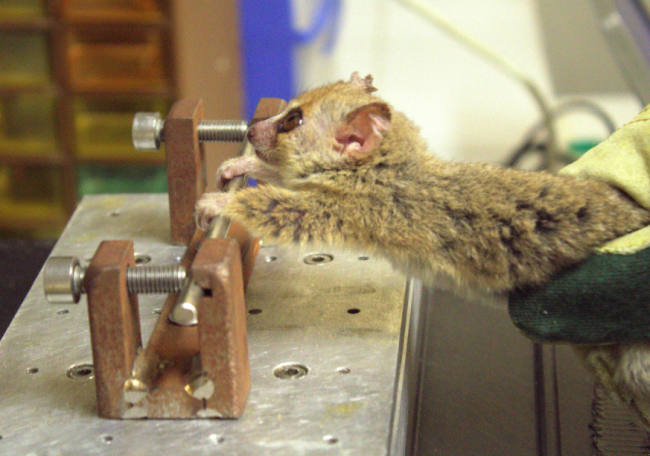 The world's smallest primate is not an intimidating animal. It has outsize eyes, nibbles on fruit and insects, and would fit in your breast pocket. Yet at least one species has a super-strong grip, which might help humans understand how our own hands evolved. Among many species of mouse lemur, the largest—not that that's much of a distinction—is Microcebus murinus, the gray mouse lemur. Like all other lemurs, M. murinus lives wild only in Madagascar. But a captive population lives at the French research institution UMR7179 CNRS/MNHN, where graduate student Pauline Thomas and her colleagues decided to measure the strength of the petite animals' arms. Having a strong grip is crucial for an animal like a lemur that lives in the trees. Some lemurs are acrobats that swing and leap between branches; other species, like mouse lemurs, do more subdued clinging. But all of them would be in trouble if they lost a handhold in a high branch. And since the earliest primates—our ancestors as well as the lemurs'—are thought to have lived in trees too, their need to hang on tight may have influenced what our hands look like today. The researchers studied 62 captive gray mouse lemurs, both males and females. They measured "pull strength," or how well the animals can hang on to something. As has been done with other species, the researchers studied this by simply letting the lemurs latch on somewhere and then gently pulling them free. In this case, the lemurs gripped a little iron bar. The bar was mounted to a force plate, which measured how much force the lemurs were exerting. Then a researcher tugged the animals horizontally away from the bar. The experiment was repeated multiple times with each animal to make sure the tiny athletes performed consistently. Comparing the results to the lemurs' body measurements, the researchers found that heavier individuals could pull more strongly. Longer forearm bones also made for stronger lemurs. As the animals got older, their grips weakened. And females with more young were stronger, probably because their bodies had been in better condition to begin with. On average, the mouse lemurs could pull over 10 times their own body weight. This was an impressive performance, compared to some other animals whose pull strength scientists have tested. Mice can pull less than a quarter of their body weight, and rats can pull just 7 percent. Gripping tree branches and grasping bugs to eat aren't the only tasks that require a mouse lemur's hand strength. Mouse lemurs are promiscuous, and during mating the males have to cling to the slightly larger females. Scientists don't know yet how the gray mouse lemur's grip strength compares to other primates, though. The diminutive lemurs might only be average. But if senior author Anthony Herrel had to guess, he thinks mouse lemurs are likely extraordinary. Mouse lemurs live on especially narrow branches, Herrel explains. "To walk on narrow branches you need to be able to grip really well, as otherwise you will topple sideways." To get some data, Herrel hopes to compare M. murinus to other lemur species with different lifestyles. Herrel says the earliest primates may have been adapted for hanging on to narrow branches, just like the mouse lemur does. So further research might provide hints about how all primate hands evolved, as well as whether mouse lemurs are really strength champions. "Our data suggest that, at least, they are quite strong," he says. Image: courtesy of Pauline Thomas.

Help do some science! Is it your first time visiting Inkfish? Do you read every post? Either way, you can be part of a scientific study without leaving your chair or sniffing a poop stick. I’ve teamed up with researcher Paige Brown Jarreau to create a survey of Inkfish readers. By participating, you’ll be helping me improve Inkfish and contributing Paige's research on blog readership. You will also get FREE science art from Paige's Photography for participating, as well as a chance to win a t-shirt and other perks. It should take 10–15 minutes to complete the survey, which you can find here: http://bit.ly/mysciblogreaders. Thank you!!

Planet EarthWhat Did Humans Evolve From?
Recommendations From Our Store