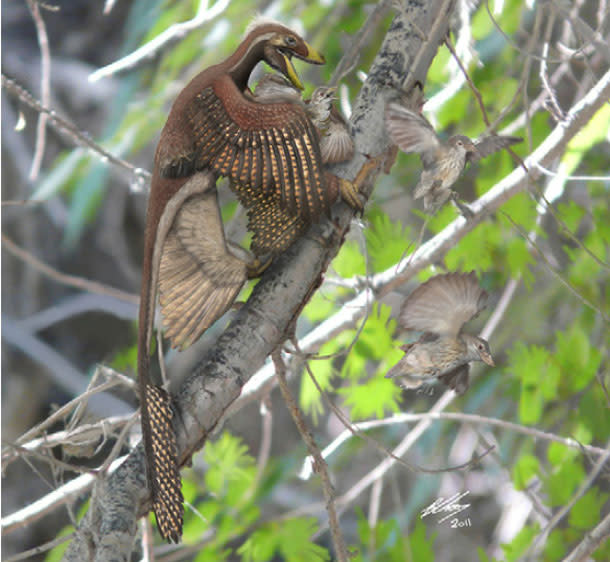 We now know that birds evolved from small, feathered dinosaurs. It’s easy to think that since birds are still around today, they must have come after their dinosaur* cousins, but that’s not true. In the Cretaceous period, dinosaurs were still around while their descendants flitted through the skies. And some dinosaurs made meals of their flighty relatives. Jingmai O’Connor from the Chinese Academy of Sciences has uncovered the remains of a small dinosaur called Microraptor that has the bones of small bird in its gut. O’Connor analysed the fossil with Xing Xu, a Chinese scientist who has made a career from discovering beautiful feathered dinosaurs. Microraptor is one of his most important finds. This tiny animal, about the size of a pigeon, had four wings, with long feathers on both of its legs as well as its arms. It was, at the very least, a very competent glider, if not a true flier. The specimen that O’Connor and Xu have studied isn’t the best preserved Microraptor around. However, it does clearly have the remains of a small bird in its gut, including the left wing and both feet. There aren’t enough bones to tell which species it was, but the distinctive shape of its leg bone singles it out as one of the enantiornithines, an extinct group of early birds. They were, after all, one of the most common groups of birds in the forests of China, where Microraptor hunted.

The bird wasn’t just buried alongside Microraptor, for its bones are enclosed by the larger animal’s ribs. It must have been eaten, and O’Connor thinks that Microraptor probably killed the bird, rather than scavenging one that was already dead. Many of its bones are still found in the right orientation, and the animal facing down towards Microraptor’s hips. The dinosaur probably caught it and swallowed it head-first, just like many modern birds of prey do. If O’Connor is right, then this unique bird-within-a-dinosaur fossil has implications for the origin of flight. Some argue that the powerful flapping stroke of modern birds evolved in ground-living dinosaurs, to help them flap over obstacles. Others suggest that the stroke originated in trees, to help dinosaurs to glide between branches and control their descent. The four-winged Microraptor has always been acted as a star witness in this debate, and O’Connor’s specimen confirms that it was indeed at home in the trees. All of the Jehol enanthiomithines lived in trees. Their legs and feet were clearly adapted for perching rather than running or swimming. If its prey lived among the branches, then that’s where Microraptor must have hunted. And since its prey was an adult, rather than a chick, it must also have been a fairly agile predator. “[The fossil] lends further support to interpretations that Microraptor gui was spending a substantial amount of time in the trees,” says O’Connor. This new Microraptor joins a brief but distinguished line of fossils-within-fossils, that provide conclusive evidence about who ate whom in our prehistoric planet. Based on similar gut fossils, we know that the first feathered dinosaur Sinosauropteryx often ate small mammals and lizards. Turning the tables, the early mammal Repenomamus sometimes made meals of dinosaurs, like a baby parrot-beaked Psittacosaurus. And predators themselves would often become prey – the abdomen of Sinocalliopteryx included the leg of a meat-eating dromaeosaur (the group that includes Microraptor and Velociraptor). Reference: O’Connor, Zhou & Xu. 2011. Additional specimen of Microraptor provides unique evidence of dinosaurs preying on birds. PNAS http://dx.doi.org/10.1073/pnas.1117727108 *Throughout this piece (and indeed, in the title of the new paper), “dinosaur” refers to the “non-avian” kind. Reconstruction by Brian Choo; fossils photographed by Li Yutong and Gao Wei