Microcosm Week: Dreaming of a Complete Solution to Life 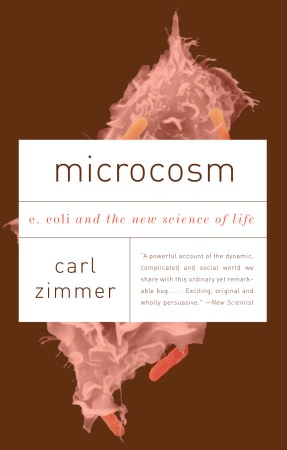 Last week, three teams of scientists published three massive studies in Nature on the genes behind schizophrenia. They scanned thousands of people to find variants of genes that tended to show up more in people with schizophrenia than in those without it. And they found a heap of genes. There are thousands of different variants that each may raise your risk of schizophrenia by a tiny amount. Nicholas Wade, a veteran genetics reporter at the New York Times, has been following the quest to trace diseases to genes for a long time now. And when Wade tried his hand at blogging last week, he laid down a harsh verdict.

Press releases from five American and European institutions celebrated the findings, one using epithets like “landmark,” “major step forward,” and “real scientific breakthrough.” It was the kind of hoopla you’d expect for an actual scientific advance. It seems to me the reports represent more of a historic defeat, a Pearl Harbor of schizophrenia research.

By "defeat," Wade was not saying that the research was wrong. It was just not going to lead to any quick fixes for this devastating disease. While the risk of schizophrenia can be inherited, that does not mean that you can take a pill that compensates for a single broken gene and cure it. These new results are depressingly similar to a string of searches for the genes linked to other conditions, such as diabetes and high blood pressure, as I explained in my recent essay for Newsweek, "The Gene Puzzle." Now that scientists can read the human genome and scan thousands of people's DNA, they're not finding easy answers. They instead are finding networks upon networks of thousands of genes, that can be disturbed in a staggering number of ways. It can be frustrating to discover just how complex our genes can be. But we really shouldn't be too surprised. We've had plenty of warning about the complexity of life from a much simpler organism: E. coli. E. coli only has 4,000 or so protein coding genes (we've got about 20,000, plus thousands of other important chunks of DNA). E. coli doesn't have to develop into a brain or a heart or a toenail: all it needs to do is be E. coli, a single, tiny cell. As I explain in my book Microcosm: E. Coli and the New Science of Life, E. coli has been studied up and down and every which way for a century. It is the best-understood species on Earth. And by 1973, the great biologist Francis Crick, co-discoverer of the structure of DNA, decided E. coli should be the subject of a singular scientific project--a kind of biological moon shot. He called for the "complete solution" to E. coli: a total explanation of how the cell sustained itself, grew, and reproduced. It's been 36 years since Crick's call, but scientists have yet to figure E. coli out. For one thing, they don't have a very good idea of what a lot of its genes are for. According to a study published in PLOS Biology in April, the function of a third of E. coli's genes are uncharacterized. The authors of that study were able to come up with hypotheses for what all those 1431 genes do, but they are rough hypotheses at best. The scientists proposed the some genes are involved in building proteins, for example, or constructing membranes. They could not offer a detailed explanation for how the structure of each of those proteins allowed it to carry out some particular function. 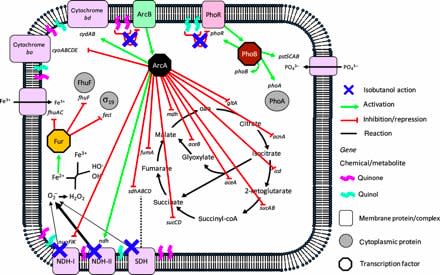 It will take a lot of scientists doing a lot of experiments to figure out exactly what those 1431 genes are doing. And conversely, it will take a lot of work to figure out the interactions of genes that produce even the simplest things about E. coli. This diagram comes from a paper published last month in Molecular Systems Biology on one such simple thing (click on it for a bigger view). Scientists have been engineering E. coli to make an alcohol called isobutanol, which might serve as an alternative fuel. The only catch is that isobutanol is poison for E. coli. Even a tiny amount of the stuff will cause the bacteria to stop growing, which is the last thing you want to happen to microscopic fuel factories. So scientists at UCLA tried to figure out how isobutanol makes E. coli sick. This diagram sums up what they figured out: a single kind of molecule can trigger all kinds of changes in the activity of a number of proteins, and those changes cascade through the cell, as proteins shut down genes for other proteins or activate other ones. That being said, the scientists did figure out the answer to this particular question, and they are figuring out how to tweak this network to help E. coli survive its self-made poison. While E. coli should make us skeptical of big promises about mastering the human genome in the near future, we can still have some hope for the distant future. Pearl Harbor, after all, did not end the war.